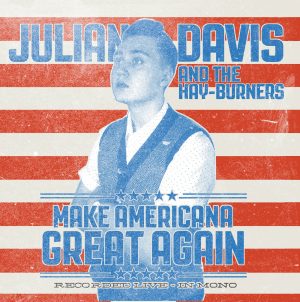 Dale Watson could more than likely be my FIRST ARTIST to be on my TOP 50 for two years in a row! If you’ll remember last year I announced Dale Watson was recording a LIVE album….well..it’s HERE! This album is one hell of a wild night with Dale and his Lone stars from Big T’s Roadhouse in Texas. Now one thing you will always remember about Dale Watson’s show are the Lone Star commercials and also on this album the BEST DOGS IN THE LAND and ALSO you can learn where “Out Yonder” is, right through the door that says “Out Yonder”.

You know Whitey Morgan covered ‘Where Do You Want It” really well, but nobody sings and plays it better than Dale himself and on this album his band is in top form for absolute sure, because “Everybody’s Somebody St. Hedwig Texas”.

One of my favorite songs he has ever played was the popular “Honky Tonkers Don’t Cry” in my opinion that is the best song he does ever. I’ll always love it and I don’t believe he will ever be able to beat it. There are a few Merle Haggard covers on this album including “The Bottle Let Me Down” and “The Fugitive” and many other Dale Watson classics like “I Don’t Rock No Cradle” and a fabulous steel guitar song called “Don Don Boogie”.

You know Dale Watson has Don Polluck one of the finest steel guitarists in the business today I’m getting to know tones and things like E9 and what they mean when added to the music through what he does for  Dale. In a nutshell this live album is truly an awesome piece and NEEDS to be added to YOUR collection NOW!

2016 keeps throwing curve balls at me for absolute sure, this one will for sure be one of my top 5 picks on this website for DAMN SURE…It’s JUST that good, in fact it’s beyond good.  The songs on this album are basically Pure And Simple, well written and perhaps some of her finest work in the last ten years.

The opening self titled song is so positive and uplifting  and to be honest it made me choke up it moved me that much. The next two songs were just absolute pure Country Music masterpieces, and in her forty plus albums under her belt this one tore off the britches and socks. “Never Not Love You” was a more contemporary sound than what I like but it for sure complimented this album.

“Kiss It And Make It Better” was a story of her childhood and growing up much like “Coat Of Many Colors” was. This new album is also one of her finest albums vocally in MANY years and was produced VERY WELL. I don’t believe there was a bad song on the entire album.

“Head Over High Heels” was a very good song about falling in love and was pretty self evident of what it was about. “Can’t Be That Wrong” was almost all acoustic and honestly it was my favorite song on this album. Her voice has not faltered in all these years in ANY way. The only negative thing I had to say about this album was that there are only ten tracks and not fifteen or more! I am absolutely blown away this year by the COUNTRY albums being flung at us by the handfuls!

Alright folks I am HIGHLY and eagerly awaiting this young man’s set at Muddy Roots next week and to see what he brings to the table, WOW! He absolutely astounded me at the Nashville Boogie this past spring and I missed his set during The Westport Roots Festival. He’s been burning up the independent Roots Music circuit and is pretty much the talk of the music world right now.

This young man made me ashamed of my own playing abilities being half my age and he displays the most amazing guitar playing you will ever see. He was one of my top acts at the Nashville Boogie and I’ll say that there are a few artists in the underground circuit like Rory Kelley and Dallas Moore that can pick like Julian Davis but not many can pick LIKE him…

This album is full of wonderful versions of songs like “Little Maggie” and “Call Me” I do not believe I ever heard anyone cover a Blondie song like this. Along with a good ol’ western swing song called “Kansas Plains” and you can see so many of his influences on his covers of Pokey LaFarge and the Allman Brothers..heck I remember him covering a Motorhead song!

The instrumentals on this album are almost as fantastic as his knowledge of classic songs and his appreciation of history for music.

Let me begin by first saying I LOVED this album however this Country Rap stuff doesn’t exist to me so I didn’t pay much attention to the re-make of “Trashy Women”, in fact I only listened to a small portion of it before turning it off. Would I make fun of you for liking it…no…I would not. Yeah I know what you’re going to tell me people like Charlie Daniels country rapped in the past, and maybe so but I’m more backwoods country and old school than what they call country rap.

The album opens with two truly good down home honky tonk songs filled with good beats and steel guitar reminiscent of their first album way back when. In fact it’s almost better than any album they ever put out. “If I Ever Cross That Line” is possibly the best song on the album with it’s awesome slow dance tempo and well thought out words.

Twelve songs of Country Music greatness fill this album that you MUST HAVE in your collection at home, because this includes their LIVE cover of Roger Alan Wade’s “Psycho Bitch From Hell”. “Fast Cars Guitars And Fine Tuned Women” was a song with a more modern sound I thought was kind of out of place on this album but it was a good song nonetheless.

The album closed with another song called “I Ain’t Falling For That” which wasn’t bad but also fell short of really arousing my ears for what I was waiting for out of a Titan such as Confederate Railroad. Overall this album WAS indeed a home run for me in most ways indeed.

Kelsey Waldon: I’ve Got A Way

This woman’s second album is another absolutely amazing venture and if you don’t have ALL of these albums you are crazy. It’s been a pleasure to writer this one, in fact “False King” has one of the best lines in the chorus I have heard all year. The mix job on it is fabulous and the music is equally good.

It opens with “Dirty Old Town” and the title track “All By Myself” both of which were fast paced toe tapping Country music goodness. That steel guitar pops and the beat has a 70’s Honky Tonk sound much like Margo Price’s masterpiece released this year in spring. This woman is one of the top acts I am waiting for at Amercianafest this year, and is one of my top female Country acts around today.

“Don’t Hurt The One” is a slower song and it has REALLY good vocals on it, she has such a gorgeous voice. I first heard about her on the Texas Music Scene with Ray Benson her 2014 album Goldmine was really good. This follow up album took some time to release but she is forming her own sound with songs like “I’d Rather Go On” and “Let’s Pretend” she is blazing a honky tonk trail across our speakers.

The album which once again only has twelve songs on it gets forgiven because songs like “Life Moves Slow” come right out of the good old days when songs made you want to drink….a LOT……