The Ditchrunners Future Plans For 2017. 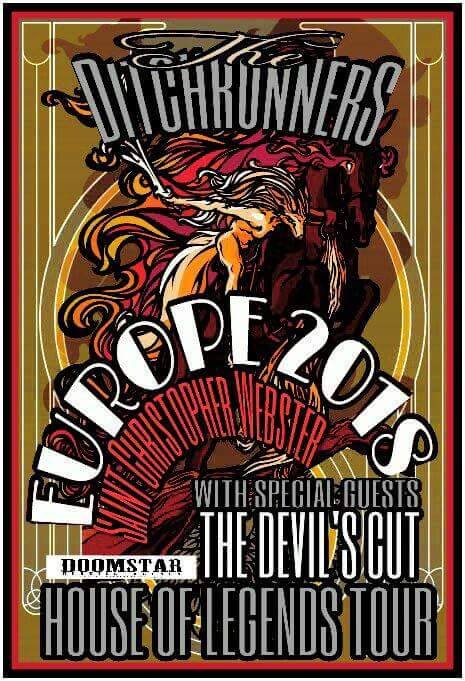 You know folks I got to thinking I haven’t talked about an iconic Roots Music band that I am quite sure many of you are familiar with from Wisconsin The Ditchrunners. As many of you know I was actually raised in Wisconsin and I was also good friends with the late Owen Mays, who did some work with this band in the past.

Mr. Derrick Maddox stopped by recently and gave me the lowdown on their overseas endeavors, and some plans for the fall of 2017. They recently signed on with Doomstar booking agency in The Netherlands… They have a huge European  tour schedule for summer 2018. Upon returning back to Europe they are headlining their  second European tour in summer of 2018 making for an all out powerhouse package deal, St. Christopher Webster and The Devils Cut will be making their debut overseas. . They recently picked up Bob Wayne’s former agent Rebecca Baker for all of their United States booking, she represents ZB Booking Agency. Their American tour will begin in their home state of Wisconsin June 3rd and will continue until July 1st at the Heavy Rebel Weekender then they will return home.

They also signed  a record deal with Rusty Knuckles Records and you can expect a debut album release in the fall. Their record release tour will commence October 1st and go until November 6th. The Ditchrunners that will take you to their BIO page. They recently landed a track on Comedy Blockbuster Soundtrack called “60 yard line” coming to a theater near you.. This five piece band has been relentlessly laboring along the nations highways and Honky Tonks chasing that musical dream all bands salivate for. So I can assure you folks if you like this band like I do you’ll be looking for their growth both musically and globally as they are quickly becoming recognized as a vital and tangible touring band while maintaining a level of local band presence. Recently they were recognized in their area at the WAMI Awards, by winning Americana/ Bluegrass Band of the year in2016. They were also nominated for this year’s People’s Choice Band of the year at the  2017 WAMI awards.

For those of you that are not familiar with the WAMI organization, you can click on that link up there:

The Wisconsin Area Music Industry (WAMI) is a volunteer organization whose purpose is to educate and recognize the achievements and accomplishments of individuals in the Wisconsin music industry. Since 1980, WAMI has worked to: