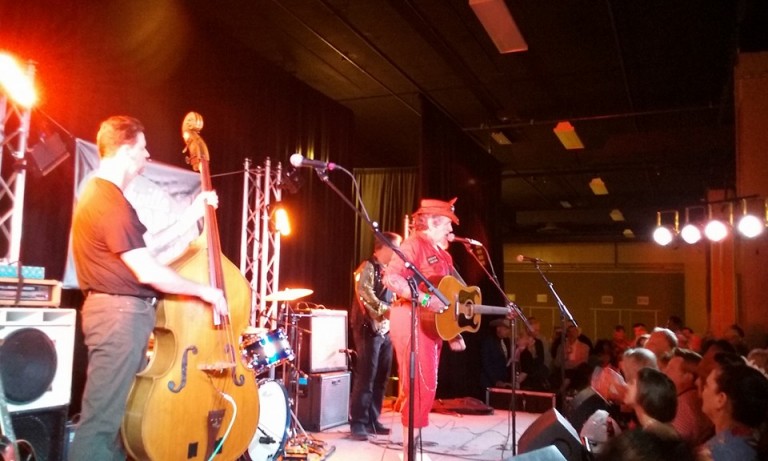 Man what can I say about The Planet Rockers that I failed to mention last year? I mean honestly they were one of my top 3 acts of last year’s Nashville Boogie Vintage Weekend, having played at the Palace. This year they were in the Ryman exhibit hall and they sounded absolutely amazing, like rolling thunder and loud enough to bring Unknown Hinson back to life.

These guys are like the Motorhead of Rockabilly, loud and obnoxiously heavy in the most awesome way I could ever write about. Once again lead guitarist Eddie Angel just absolutely slayed it on that stage with blazing leads and with Sonny George up there bellowing out songs like their opener “Big Wheel”  and “Spin My Wheels”.

If you missed their set Friday you missed you missed a iconic set for sure, as they went into ‘Yes I Do”. These guys have been around for a long time as their LIVE album A Night At The Twist And Shout from 1998 in my opinion is one of the best LIVE albums I have in my collection. A bunch of these songs are on that album as well like “Gravy Train” and “Truck Drivers Rock”.

They played “King Fool” and my personal favorite song they do is called “One’s All The Law Will Allow”, I just like the lyrics and they way he hollers out about that Jersey Cow and One Eyed Horse. One of the last songs I remembered was “Hot Seat”, and also I was getting ready to head back over to the Nashville Palace to finish off my night with my next two acts that were monumental in every way but before I tell you about that I remember hearing “Trouble Up The Road”.

Rosie Flores is one of Rockabilly’s most beloved Legends and one that I have never had the opportunity to cover on my website, her OR the next Country Music Legend the one and only Dale Watson. Both Texans played at the Nashville Palace where I finished up my second day of music watching partly because I locked my keys in my truck and had to wait on AAA to get there.  Not sure if you noticed that but AAA is actually a sponsor of me and has provided me with a membership and dog gone it I’m glad to have them there for me.

She opened her set with “Get Rhythm” and another called “I Want You To Know” and she also is in the process of recording a new album this year. Her set tonight was filled with many instrumentals showcasing her true guitar gun slinging fashion from a time many were dreaming of playing music. Miss Rosie paved the way for many of the other acts this weekend as did Dale Watson and Billy Harlan.

“I Want You To Know” was another song she played and she also announced that she is recording a new album as well and it will be out in fall. “King Of The Blues” was a good song she played and then she went into some songs that Dwight Yoakam made popular like “If There Was A Way”. In fact that’s my personal favorite album Dwight ever released, and actually my favorite album of 1990. It was his fourth studio album and by far his most popular to date.

Later on in the set Miss Rosie played another Dwight song “Long White Cadillac”, but first she played a song called “Country Boy” and another called “Drug Store rock” which was off the Rockabilly Philly album which I picked up on CD tonight. She closed up her set with “Tear Me Up”, and the crowd was truly pouring into the Palace ri ght now to hear the next act tonight and my final one before I went home.

Dale Watson is a Country Music Legend in his own right and has been burning up the roads since 1970. In many ways he paved the way for those that came after him but yet had his way paved by my last act I just covered Rosie Flores, having began his recording career upon her urging. He is a former house band member of the famed California venue the iconic Palomino Club, which was featured in the Clint Eastwood classics “Every Which Way But Loose” and “Any Which Way You Can”.

Honestly going into this show I was expecting a wide range of songs and was hoping he would dip WAY back into his list of songs for us tonight, and of course he features the famed Lone Star Beer commercials during his set. He opened with “Things I Shouldn’t Do” and followed it up with “Jonesin For Jones” of course that was a song dedicated to George Jones.

“I Lie When I Drink” was next another great song that initiates huge crowd interaction when they get to answer back “I Drink A Lot”. He played one called “Texas Boogie” before playing his anti-pop country anthem “Country My Ass” which pretty much got us all into party mode there, “Exit 109” was part of the set tonight as well.

He played “Suicide Sam” and several more of his truck driving songs that he is so well known for playing and recording like “Jack’s Truck Stop” and another called the “Birmingham Breakdown”. Honestly so far this was one of the top 3 sets of the entire festival in my opinion and I REALLY enjoyed it and couldn’t think of a better venue to see it than the Palace, in fact I’m on my way back down there for lunch and music ad records RIGHT NOW!

…oh wait he closed with “My Baby Makes Me Gravy”…and that Lone Star jingle again. You cannot forget the Lone Star sponsorship, I always wondered what kind of beer he liked?