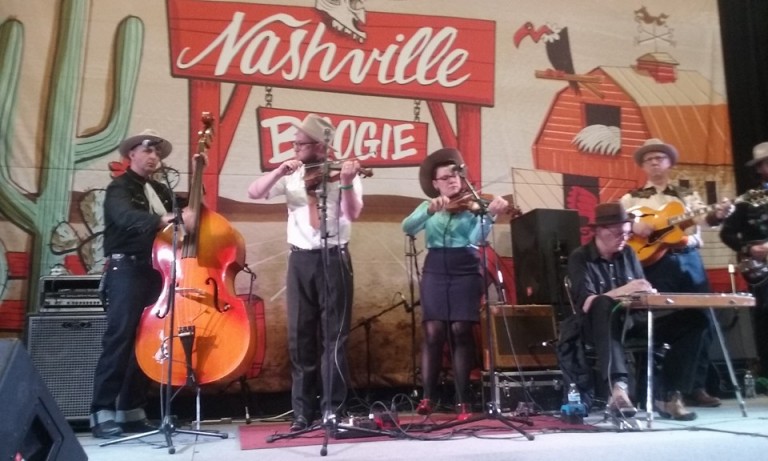 Folks this is the third day of the festival and I’m getting to spend a bunch of my early time here at the Opryland Hotel Event Center and Ryman Ballroom. Last night was terrific a time at the Palace and I left after Dale Watson to catch up on sleep last night so I could arrive in prime shape today to work more on the music. For the second year in a row Miss Riley Reed organized the fashion show and once again JPCyr and the Radio Wranglers provided the music for it. Miss Riley is a student of Manuel’s and is a prominent downtown Nashville figure, and not one of them tourist figures either, she IS the real deal I can promise you that.

Eight different designers made up the show this year and they all showed off several of their styles with male and female models in parts. The models moved really fast and it was hard for me to get still photos on my phone but my buddy Mr.Joe Dooda was a model and Mr. Joshua Morningstar modeled off the top that Miss Ellie Monster designed for him. Also modeling was  Miss Kacey Musgraves and Miss Tanya Montana Coe along with Miss Kendra Hope and more.

I actually came away learning about different styles of stitching and I was admiring the fringes on the dresses and men’s tops. Basically the different designers had four of five different models of their clothes showcased within a time frame with Miss Katy K once again announcing the event. Miss Riley walked out on the stage floor with her new baby daughter Little Miss Orla, whom I finally got to see this weekend with those little boots. Miss Riley puts an absolute ton of love into what she does and I thought this was an enjoyable part of the festival even though fashion is something I know very little about, maybe that’s what drew me to delve into learning more.

The first act I covered today was none other than Lucky Tubb. I have indeed covered his set before and he played the Palace at last year’s Nashville Boogie. He performed a truly wonderful set early on today beginning with “Let  It Roll”and “Sweet Sweet Kisses”. For the first time in quite a while Lucky Tubb’s entire collection of albums has been re issued for the merch booth and I sneaked over and picked up Damn The Luck while they played “Bad Decisions When I Drink” and followed that with “Coming Home”.

It wouldn’t be a classic Lucky Tubb show without some classic covers like “Thanks a Lot” and the Warner Mack classic “The Bridge Washed Out”. And those covers were followed up with “Honky Tonking Man” and another cover called “Cow Town Boogie”. He played an ever popular Wayne The Train Hancock song “Juke Joint Jumping” and closed his set with a song off Del Guado called “Officer Guerrero”. I was enjoyed his set today I tell you what I have saw some pretty damn good sets this weekend so far but I pretty much have my Top 2 picked already.

So I’m sitting here enjoying the Psycho Devilles with Luther Jackson they come highly suggested by Mr Luther. I’m truly glad I listened to him because immidiately after hearing the rocking song “Bar Fight” I was a fan of their music.

They barreled into their anti anthem called “The Rebel” and followed that with a song about hot rods called “Chopped Down And Hopped Up”. Speaking of hot rods I did get to see some of the classic cars in the vendor area and some of the vintage clothes. “Addicted” was another really rocking good song about collecting cars and women, which pretty much sums up the rockabilly lifestyle right….well I enjoy the music aspect of it all.

“This Old Road” was a song that was recorded over 25 years ago they said. Many of these rockabilly bands are legendary in many ways and date back quite some. “My Guitar Saved Me” was off their new album that will be out July 25th and I shall be featuring that album in one of my articles. They followed up with a song called “The Real Deal” and continued to have the crowd into a frenzy with “Psycho Cadillac”. They closed their iconic set with “Hot Rod Man”, I tell you what folks this first time band is indeed one I shall cover again upon my next opportunity.Upon enjoying their album I bought I noticed the song “My Guitar Saved Me” was also on that album so please forgive me if I made an error in my review I might have misunderstood them.

I went out to the Opry Mills mall to grab me a bite to eat of supper so I could return and cover the next few names in my next article that will finish up night number three, and trust me I witnessed some stellar bands during my next article which will cover the undead Hillbilly Kang none other than Unknown Hinson, Big Sandy And The Fly Rite Boys and MORE!