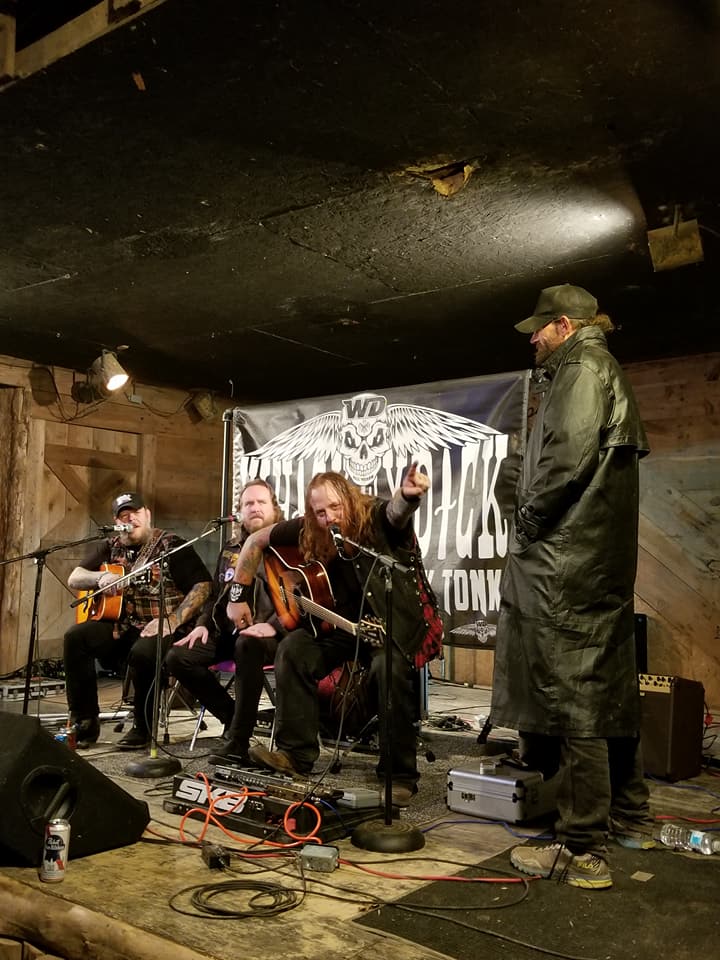 My friends time after time I have been preaching on how much I LOVE Muddy Roots music events in my area. True at times there a lot of personal things flying around focused on Muddy Roots events, however you can save that for the social media page you own. ON THIS ONE I’ll focus on MUSIC, and how much I appreciate the bands, and the people that make the events roll. THAT’S YOU…YOU ARE the one that spends time and money there. It lives because of YOU!

A few weeks ago Mr. Jason put together a smaller lineup based more on bands with a darker ambiance than the usual Muddy Roots based bands. THIS IS WHERE you can find out more about this event, which Mr. Jason has said will most likely happen next year.

I had my opening weekend of rifle deer season this weekend, so I only got the chance to see a few of the remaining acts on that Saturday night. I just wanted to write a short piece on this event, basically I was there to be social and enjoy the bands I did get to see. I know Miss Alina flew all the way from Moscow Russia to be with us, and I wanted to see her play.

Miss Alina Vivita brought a different style of music to us tonight, and it was very enjoyable. It was more of a folk type of music with a very interesting style to it, and she complimented the lineup truly well, and certainly was well worth going to see!

I wasn’t really going out of my way to retrieve the song lists or delving into the show in the usual capacity that I typically do, I was honestly there to unwind and watch the music for my own total enjoyment. Basically sort of taking some time off the website to enjoy nature and deer hunt.

I remember getting to meet her at Westport Roots Festival this past spring, and it was nice to get to see again. Now this event took place at the location that Mr. Jason hosted the first Muddy Roots Spring Weekender in 2013. It’s out in Adams Tennessee about 20 minutes from my house, and on a normal weekend I would have been there the entire time. However I hunt to eat for the winter and not only for the sporting aspect of it.

I got to spend a good amount of time with many of my friends that attend these events like the next band WhiskeyDick whom I wrote about in my Muddy Roots Main articles this summer. They played a really nice instrumental that I caught on video, which is included in this article.

They played “Devil’s Eyes”, off of their First Class White Trash album, and WHAT WOULD a WhiskeyDick show be without them playing “Bastard Sons of Texas”? I mean, honestly this duo has existed for ten years plus and is still wowing audiences all over America AND overseas.

Before they performed their signature songs “Drunk As Hell” and also their song called “Yee Haw” I captured this video of their eclectic instrumental abilities, before they brought up Mr. James Hunnicutt who played Friday. They also all brought up our personal friend Mr. Jared McPherson, who had a guitar stolen from him during Muddy Roots. They all pitched in and bought him a new guitar, which showed true love for their fans overall. Mr. Jared is always willing to lend a hand and help the shows out.

After playing a song for our fallen heroes they played a great song called “Black Tooth Grin” and then closed with a Lynyrd Skynrd that made this a VERY enjoyable set and a VERY enjoyable portion of the festival. Another of the bands that performed tonight that I got to enjoy was Sons Of Perdition however much of the band apparently couldn’t make it.

He had Mr. Josh Danforth on the accordion with him and they also played many horror themed songs before the main act of the night which was O’l Lonesome Wyatt and Those Poor Bastards whom I haven’t had the opportunity to write about much lately. i cover so many genres and bands, I cannot easily catch up with everyone at the same time.

I got to watch Those Poor Bastards play a totally enjoyable set, including songs like “World Is So Evil” . This band has plenty of material to play songs from for this show, as their catalogue is vastly large. You know Those Poor Bastards are one of those bands that don’t get to travel as much, however they keep recording fresh and good material. Some of Lonesome Wyatt’s work with Miss Rachel Brooke is some of my favorite work he has ever done.

Also included in their set were the songs “Crooked Man” and the song “No Light”. All in All this festival located in Adams Tennessee at the Red River Campground will hopefully be a reoccurring piece of the Muddy Roots program of events.