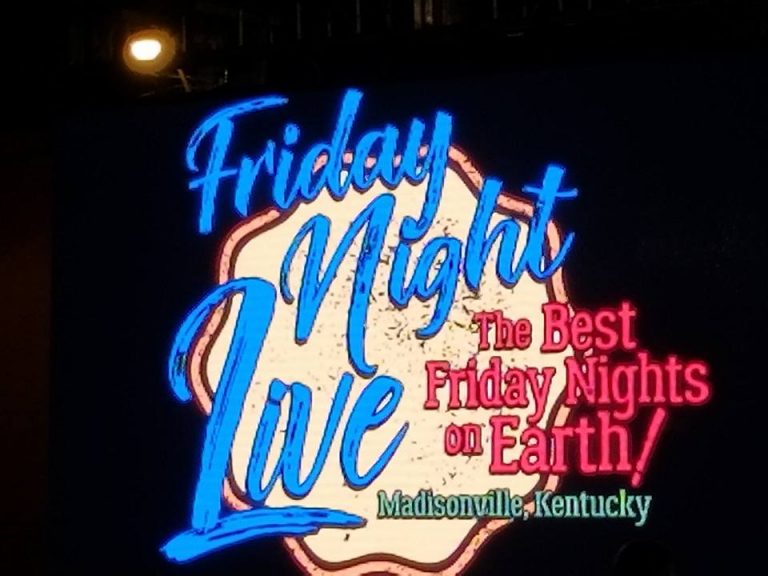 A few weeks ago, my friend and I went out to Madisonville Kentucky, where they have the weekly concerts on the square series. This summertime function greatly supports my local community, and local businesses without promoting the mega chain stores. Downtown Madiosnville abounds with good places to eat locally owned and fun places to visit if you enjoy history.

Mr. Alonzo Pennington band was first, and to be honest I didn’t get to hear his set completely and as thoroughly as the next two acts. We actually enjoyed a nice meal at a local diner before the main two acts tonight, Mr. Buddy and I don’t get to see one another that often so it was nice catching up.

Mr. Tyler Childers was first tonight, and unless you have been under a rock or you are new to this type of website, you have heard about Mr. Tyler Childers and his rapid rise to the spotlight. I’ll be honest people It’s going to be a good end of the year for him, I’m sure he will grace many of the Album of the year lists. I could not take video of this show everybody for local legal reasons I did not ask for permission, I thank you for understanding that.

The initial local audience buildup was amazing for my area, and I was greatly pleased at this positive outlook on this wonderful artist from the Appalachian region. For those of you that aren’t familiar with Mr. Tyler you can find out more about him on most websites like mine, that are raving about his new album Purgatory. This album was produced by  Sturgill Simpson and I featured his new album HERE.

Tyler Childers and the Foodstamps immediately blasted into some truly amazing songs here tonight as they opened with “Born Again” and captivated the whole county as he delved into the cover of Utah Phillip’s song “Rock Salt And Nails”.  He has an amazingly unique voice and vocal presentation, you know many times I hear people say that nowadays you cannot tell the difference between  singers..and when you hear HIM you can easily ascertain his voice.

“Swear To God” was song that is on the album that I really and truly enjoyed. This album sounds and feels SO wonderful I firmly believe it’s a triumph in every way! His set included the Dr. Hook cover song “I Got Stoned And I Missed It”, and also the new song called “Feathered Indians”.

His cover of the Charlie Daniels song “Trudy” has always been a strong staple of his initial set, and also the song called “Honky Tonk Flame” was in the set. He also played the song called “White Bridge Road” and other songs that induce the crowd into a mega sing along frenzy.

The later portion of his set included songs like “Banded Clovis” and one of his first singles released from the album was called “Lady May”, and finally he played one of my favorite songs he plays called “Nose To The Grindstone”. This band displayed some truly fine craftsmanship tonight, and brought a unique brand of Mountain Country to my region. Songs like “I Will Follow You to Virgie” represent a region of America that I often get the blessing to visit in the Eastern region of the United States..Appalachia. There are MANY Facebook pages you can go to to find out more about Mr. Tyler Childers and one of them is my friends over at Honky Tonk Heroes and also his own fan page which you can find HERE

Waymore’s Outlaws is another band I have featured on here MANY TIME, and tonight they played a set before they brought out Shooter Jennings for the main act. Mr. Jerry Jigger Bridges, Mr. Fred Newell, Mr. Richie Albright and Mr. Tommy Townsend blaze the trails of this great nation and keep the spirit of Waylon alive.

“Are You Ready For The Country” is actually an album from 1976 and was the first studio album that preceded  the Wanted The Outlaws album, which was the first Country album to achieve platinum sales status. “I’m A Ramblin’ Man” was originally recorded by the writer Mr. Ray Pennington in 1967.

“Clyde” is originally a J.J.Cale song and was covered by Waylon with very much adoration of vintage collectors like myself. It received little mainstream attention at the time, and next on the set was “Ladies Love Outlaws” followed by “Iv’e Always Been Crazy”.

As many of you know the very night we went to this show we lost the Gentle Giant the Icon, Mr. Don Williams. They played “Tulsa Time” and went into the Steve Young classic “Lonesome Onry And Mean”. Then they brought out  Mr. Shooter Jennings who I’ll be bringing out a LOT of news about in the next few weeks.

We got a NICE review of Hellbound Glory’s new album “Pinball” coming soon, and tour information.  Id’ like to take some time to tell you about the really nice show he played for my community. “Ain’t Living Long Like This” was first from him, as well as “Play’n Possum” from his Don’t Wait Up For George album.

The enthusiastic crowd got treated to a wonderful show tonight, as Mr. Shooter himself has told me he was mourning the death of his friend Mr. Troy Gentry and wanted to bring a truly emotional performance here tonight. As he played songs like “Living In A Minor Key” and “Belle Of The Ball” he amazed my neighbors with his stage presence.

He played through his many album tonight with songs like “Rowdy women” and also “Gone To Carolina” from his first album in 2006 “Put The O Back In Country”. That’s a rare find on vinyl to be sure, I haven’t found it for under 100 bucks. He laos played “4rth Of July”  from that same album which was one of his most commercial songs he ever had.

He always closes most of his shows with a song for Mr. Jon called “Good time Charlie’s Got The Blues”.  Most of the shows I have been to lately he has closed with that song in total.  His new forthcoming album due out this fall is going to be his most Country album he has ever released since his first one, and from what he’s told my website it will be amazing.

These are two artists to be watching for toward the end of 2017 and into 2018, for this website, keep reading folks…more to come for sure!