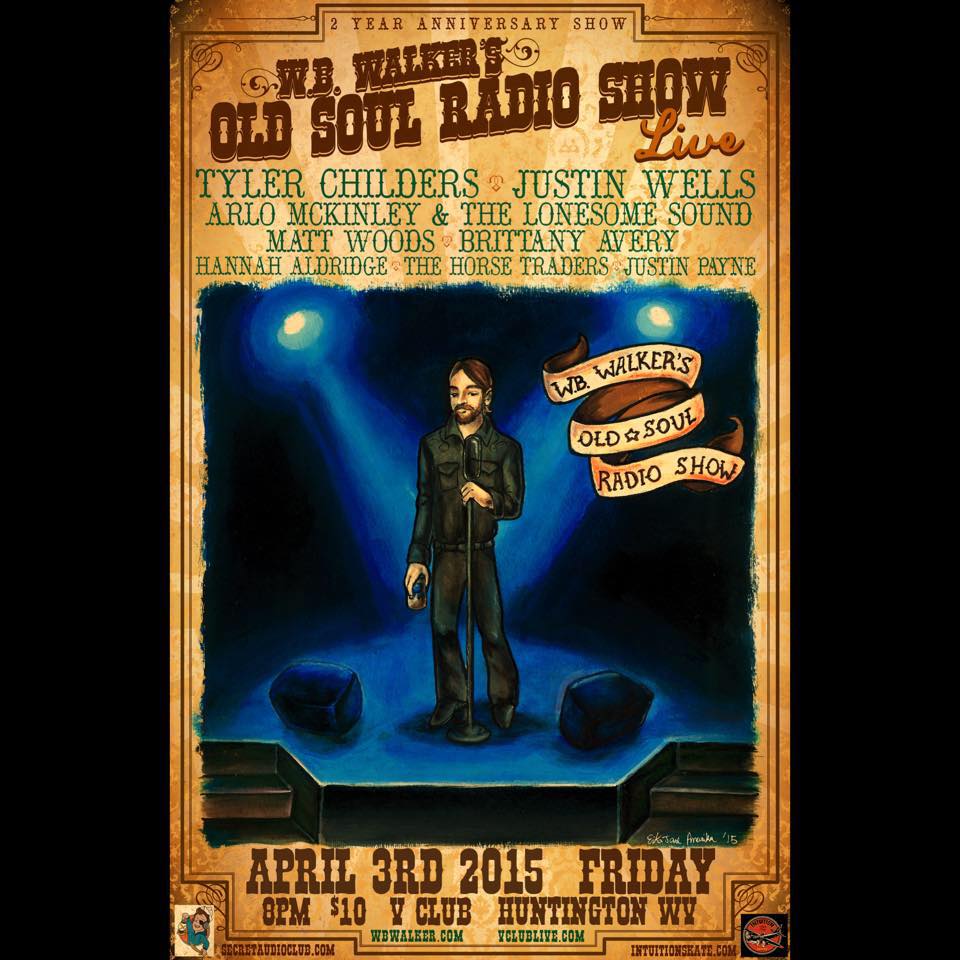 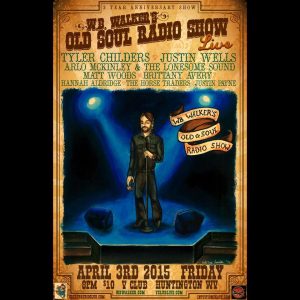 Well folks if you are not familiar with my good friend Brandon (W.B.) Walker and his Old Soul Radio Show out in West Virginia then you MUST GO OVER and check out his show. It is a weekly aired podcast that you can download on I Tunes or off the website. He usually combines three main features every week that usually compliment one another.

I learned about a TON of artists from his podcast and from talking to him on the phone in the past, and I turned him onto a few artists he has played. He ALWAYS gets permission to play his material and he does a really good job doing what he does. In fact, I have nicknamed him “The Paul Harvey Of Podcasts”.

He recently had a house show at the V Club in West Virginia and I wanted to write a review of the show. I downloaded it and listened yesterday as I worked on two more articles and the only drawback I had was it kept stopping on me. It was hard to keep track of where I lost my connection and I might have missed some of the songs played. I want to tell you about the artists involved and how this all turned out. This was a celebration of his two year anniversary episode that included the following guests:

First off was a gentleman that W.B. turned me onto late last year Justin Payne. The title of his album “No Place Lower Than High” turned me onto him almost immediately before I even heard his music. And when I did hear his music I was completely BLOWN AWAY from what I heard…uncut raw hurt. 13 tracks of greatness on one album, and O’l W.B. is on this album as well.

He opened his set with a song called “She Never Will”, and he followed that up with the song “Piece Of My Life”. Both songs are good choices and he also had the Horse Traders come up and play with him on a few songs.”Gettin By” was my personal favorite song he does which includes the title of his album within the lyrics of the song. This album is one of the top choices for me from the fall of last year.

He welcomed out the Horse Traders as they played the last part of his set and one of his last songs was “The Fall”. I am firm believer that all of his songs are very well written and this album should be given more commercial attention than it is getting right now. I try my best to distribute this album to ANYONE airing roots country music online or offline.

The majority of these artists that have been invited to this event are from the general area and this band is a really good example of the talent from the area and having a new lineup I truly enjoyed this band. I remember this band from last fall at Outlaw Fest and although I didn’t get to meet them. I will make sure I feature them in an upcoming article in the future, I was given their album last year. One of my favorite songs they played in their set was “Nothing At All”.

This next artist that he featured on the 2 year anniversary show was someone I have been checking out for a few months now because of Brandon’s show and her name is Hannah Aldridge. Her album called Razor Wire is truly a good album. She started out her set with a well written song called “Lie Like You Love Me Tonight” which had a few REALLY GOOD lines in the lyrics that stand out.

Armed with ammunition of songs like “You Ain’t Worth The Fight” and “Rails To Ride” she just absolutely tore up the club that night. DAMMIT I wished I could have traveled up there for this show, I been wanting to hook up with Brandon for many years now. She continued to play songs like “Gold Rush” and one of my favorites “Old Ghost”, but the one I loved most was one I remember from last time called “Howlin Bones”.

Kara Clark is a longtime favorite of mine from the good old Myspace Days and
she was my FIRST article when I re-launched my website two years ago in October at the Outlaws And Icons Festival in Altamont. She opened her set with MY FAVORITE song she does called “Relapse” and then went into a few NEW songs from her new album out now called “The Key”. You can order it from her website up there by clicking on her name.

Her first new single off that aforementioned album is called “Bulletproof” and she also played the title track called “The Key”. I have known her for several years and I do not get to see her as often as I’d like to but I still have all her albums in my constant rotation of CD’s. Her closing songs were “Lonely” and “Living Proof”. You know every artist on here has a few songs I was sad didn’t get included and one of her BEST is called “The Band, Bartender And Me”. Go check that song out folks..you will be glad you did.

Brittany Avery (AKA Six Gunn Britt) and me go WAY BACK into those Myspace days from around 2007. I got a long personal past with her and I basically watched her grow older and wiser, I said prayers for her and with her as she lost her grandparents and I rejoiced with her as her
baby was born. Folks this young lady has moved far away from home for love and life, her heart’s been broken and she is still smiling and she’s one of the prettiest gals I know.

Her first song was “Oh My Love” and she followed that up with one of the songs from her forthcoming album “Midnight In The Garden Of Honky Tonk Angels”. Another great song she did was called “I’m Done” and she followed that song with one called “Six Bullets”. I have seen her perform smaller sets but sadly I have never got to see her perform a whole set yet. Her closing songs were one called “Lie With Your Shame” and she closed with a Chris Knight cover song.

Matt Woods now honestly what can I say about him that I already didn’t say last year after seeing him at Muddy Roots? This was another spot I had some trouble with the player and the first song in his set I noticed was “A Company Town” and “Tiny Anchors” from his new album “With Love From Brushy Mountain” which is also in my constant rotation..it’s a DAMN FINE record.

Now this time my personal favorite song was played and I think “Snack Bar Mary And The Ten Pin Priest” is my favorite song he plays. It is VERY well written and it paints a really vivid picture within my mind when I hear him perform it. I really want to get down to a house show of his someday even if I have to travel to Knoxville area to do it.

His closing songs in this set were “Bed Sheets” and the title track from his album “With Love From Brushy Mountain” and his last one was “Dead Man’s Blues”. Altogether well rounded show this was folks and every artist Mr. Brandon selected was absolutely stellar for sure.

Arlo McKinely And The Lonesome Sound was a band I had not heard of until this show. They hail from the Cincinnati Ohio area and play quite a few shows I see and I was extremely impressed with their songs. They opened their set with “Don’t Need To Know” and another called “Pass You By”. I was pretty darned impressed with this band and although the player was still giving me some problems I was really enjoying this show, O’l W.B. really outdid himself tonight.

“Just Like The Rest” was a great song and another called “Time In Bars” was one of my favorite ones. They closed their set with a few songs called “Wishing” and “Wild Horses”..but their best song of their set was the last one called “Dark Side Of The Street”.

Justin Wells is doing exactly what I was hoping he would do after finding out that Fifth On The Floor was leaving..he is recording his own music. JUST his songs and honestly I am going to REALLY MISS Fifth On The Floor but I love O’l Justin by himself too.

His set included such great songs as “Last Song You’ll Sing” and a song that he described as Part 4 to a series of songs called “Still No Rain”. Along with Matt Woods he performed a song he dedicated to many of the people there called “The Dogs”. He followed that one up with a REALLY GOOD cover song that I never heard anyone play before acoustic called “So Far Away From Me”, and it was made popular by Dire Straits on the album “Brothers In Arms”.

He played a BRAND NEW song called “Another Night Lonely” and he stated that it will be with no band and no…with…it will just be Justin Wells. I am looking forward to it. He played “Missing The Morning” and brought out my buddygirl Brittany Avery for his duet “Wine” originally with Rachel Brooke. He played “January In Louisiana” and my personal second favorite song FOTF does called “The Fall”. My all time favorite FOTF song is “Angels In The Snow” but like I said I REALLY am looking forward to what he brings to my player on a solo album, I BET it will be awesome!

Tyler Childers man what can I say about him? I got the pleasure to see him open for Fifth On The Floor in Lexington this year and we got to talk a bunch, he is a really good guy. ALWAYS welcome here in my home and he put on ONE HELL of a show to close out the whole deal. He indeed has some really well written songs and I love how he sings them.

He opened his set with “Adam” and another Willie Nelson song that my buddy Joshua Morningstar does too called “Sad Songs And Waltzes”. BUT one of my favorite songs he does is “Nose To the Grindstone”…and mind off the pills man that song is REALLY well written. and this set has another of my favorites that wasn’t played.

“Harlan Road” was his next song along with “Charleston Girl” and he also brought out his band The Foodstamps for more songs. Probably his best song of his set and the one the audience loved the most was “I Got Stoned And I Missed It” which makes the crowd holler out along with Tyler during the song. He played “Heart Of Stone” and played a tribute to Hank Williams Sr. by playing “I’m So Lonesome I Could Cry”. They then partied harder by playing “The Weight” which is often called take a load of annie, and that is not correct. It’s actually take a load of fannie and that song was predominantly played by The Band called The Band.

So there you have it folks, despite the little glitches in the player for me I wished I could have been there!