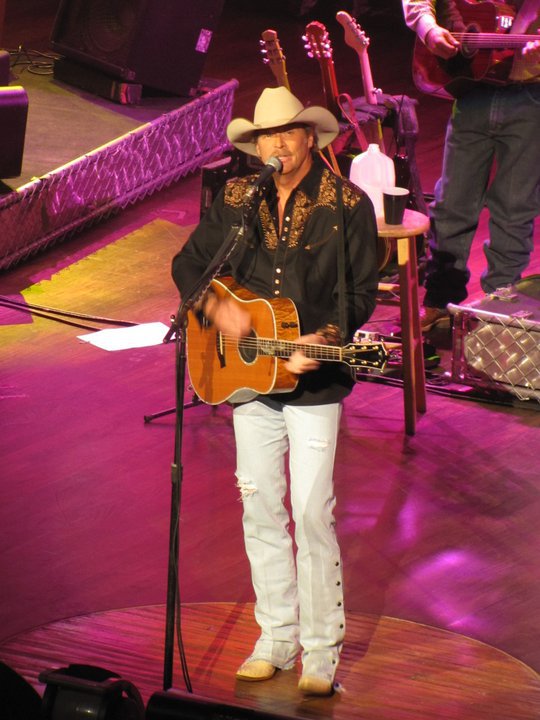 With a year of sold-out shows and packed houses in the rearview mirror, newly-minted Country Music Hall of Famer Alan Jackson’s Honky Tonk Highway Tour adds more miles and rolls into 2018, leading to more great cities with a year-long lineup of shows!

The country music icon will hit the Honky Tonk Highway again beginning January 19, heading down the road to a city near you as he plays arena concerts, amphitheatre shows, and some of the biggest annual festivals and multi-day events on the country music calendar (detailed listing below). The tour extends the superstar’s 2017 trek that began in front of sold-out crowds in Florida, Oklahoma, California and RodeoHouston and wrapped in front of SRO audiences in Wisconsin, Minnesota, Louisiana and Texas.

Tickets and information for all Honky Tonk Highway Tour dates are available at alanjackson.com/tour, where you can find information about Alan, his tour schedule, music and more. Jackson is again teaming up with CID Entertainment to offer fans VIP experiences at many of his 2018 shows.

Alan Jackson’s Honky Tonk Highway Tour will find the country icon performing hits that have gained him legions of longtime fans, songs that continue to draw new crowds as a younger generation discovers his music. Jackson’s repertoire stands the test of time; it has impacted a field of artists who cite Jackson as an influence. It’s these same songs – many written by Alan – that earned him his newfound place alongside country music’s greatest names and cemented his place in its history with membership in the Country Music Hall of Fame. Fans will hear the songs they love from the man who wrote them and made them famous, including his debut hit “Here in The Real World”…signature songs such as “Chattahoochee,” “Drive” and “Gone Country”…party anthems “It’s Five O’Clock Somewhere” and “Good Time”…and many, many more.

Jackson’s tour announcement follows his show-ending CMA Awards performance celebrating his 2017 induction to the Country Music Hall of Fame. Alan and his band, The Strayhorns, reminded fans what they’ll enjoy on the Honky Tonk Highway Tour in 2018 as he closed out “Country Music’s Biggest Night” with back-to-back performances of “Chasin’ That Neon Rainbow” and “Don’t Rock the Jukebox” (the latter with hosts Carrie Underwood and Brad Paisley), bringing the star-filled audience to its feet as the likes of Luke Bryan, Keith Urban, Eric Church and others could be seen singing along to Alan’s memories of “livin’ that honky tonk dream.”

Alan Jackson’s touring history has taken him across America and to places far beyond, and his music has gained him fans around the globe. In 2018, he’ll continue his tradition of “keepin’ it country” for people far and wide as he travels the HONKY TONK HIGHWAY, bringing nearly 30 years of hits to a city near you!