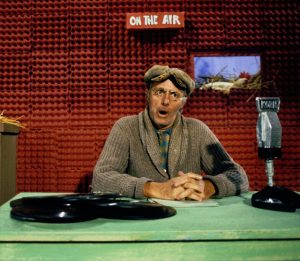 Last night I took a little trip to Lexington Kentucky to cover some bands which I am also writing about and I frequently check my Hee Haw message boards. I learned that the Cornfield County gang has lost another Legend as Charlie Farquharson (AKA Don Harron) has died at 90 at his home in Canada.
He died surrounded by family and denied treatment for his cancer per his own wishes and his daughter informed the world that even though his voice was just above a whisper he died telling jokes.

He was born Sept 19th 1924 and spent his entire childhood performing and telling made up stories and gainedattention through skits and plays. He appeared in many TV shows and movies but is most notably regarded as a television icon for his role within “Hee Haw” which was and still is the longest running comedy prime time show in history. Don Herron was the newscaster for 18 years of the show’s length and performed the role again for “Country’s
Family Reunion” Hee Haw Edition. It was also George “Goober” Lindsey’s last performance.

In 1952 on a show called “The Big Review” Charlie gave his first news report and the role was never changed nor was the costume. Charlie wore a red oversized sweater and grey frayed flatop cap and usually always had a beard and glasses. His laugh is truthfully patented and recorded for prosperity at the Smithsonian Institute and is legally not allowed to be copied.Only once was it ever copied and it was actually in respect toward him and that was during the “Revenge Of The Nerds” movies.

His character is a rural Ontario farmer from nearby Perry Sound and his wife’s name was Valeda. They had one son named Orville and Charlie often talked about his antics in school. He often gave his opinion about local matters and political matters and misunderstood city people. He also wrote several books explaining everything from doing laundry to plowing and included many pictures.