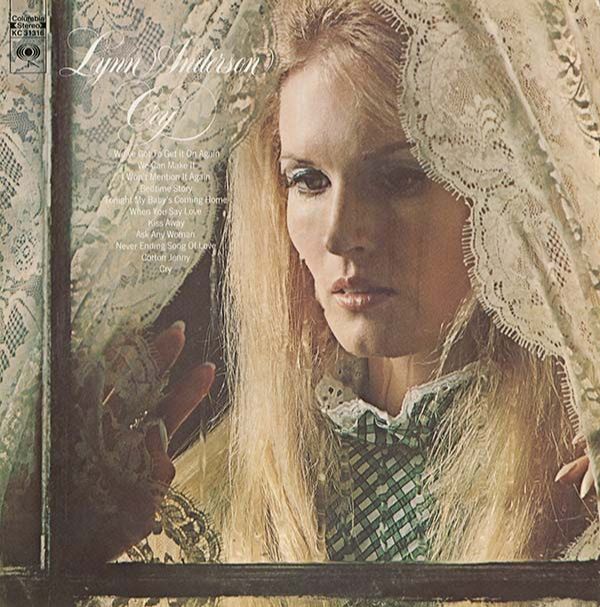 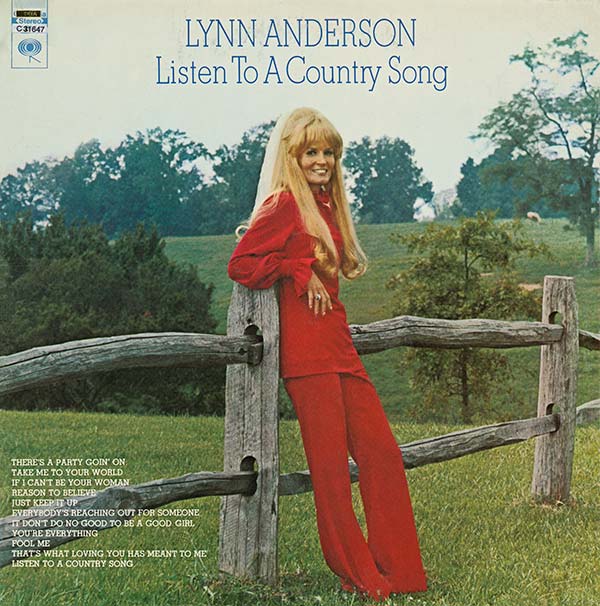 Through Legacy Recordings (the catalog division of Sony Entertainment)
Nashville, Tenn. – For the first time since her passing in 2015, Lynn Anderson fans now have access to two of her iconic albums that have just been re-released to all digital platforms through Legacy Recordings. Anderson’s digitally remastered album ‘Cry,’ was released on March 6th and ‘Listen To A Country Song’ will be released on March 20. The fan-favorite ‘Top Of The World’ has been confirmed for release, with a street date still to be determined.

Ranked among the most admired and trailblazing entertainers in America throughout her six-decade career, Lynn Anderson’s sparkling vocals brought a new level of sophistication and glamour to country music. Her groundbreaking pop-country sound helped her become one of the first female country artists to achieve mass crossover appeal. Many firsts were achieved throughout Anderson’s career; some of which broke social barriers. Anderson was the first female country singer to perform on The Tonight Show, first to headline and sell out Madison Square Garden and the first female to win an American Music Award. Lynn repeatedly delivered chart topping songs, such as “(I Never Promised You A) Rose Garden,” and was named Billboard’s Artist of the Decade for the 70s. Too timeless to be forgotten, events and celebrations are in the works to honor the classic hits and sweet southern personality that Anderson engraved in hearts across the world.

“Lynn Anderson was an icon to millions around the world, but to me she was mom,” says daughter, Lisa Sutton. “It is so exciting to have two of her classic albums re-released through Sony Legacy during a time when we need it the most. Until now, they were only available on vinyl. This is a wonderful way for old fans and new ones to come together through music. Just stay tuned, because this is only the beginning!”

About Lynn Anderson:
Lynn Anderson’s six-decade career charted 12 #1 singles and a total of 18 Top 10 hits, with more than 50 Top 40 hit singles total. Aside from being named “Female Vocalist of the Year” by the Academy of Country Music twice and “Female Vocalist of the Year” by the Country Music Association, she also won a Grammy Award for her signature song “Rose Garden.” Anderson later won a People’s Choice Award, and was the very first female artist to win an American Music Award. In 1974, she became the first female country act to sell out Madison Square Garden. Record World, a major music trade magazine of the 1950s to the 1980s, honored Anderson as ‘Artist of the Decade’ for 1970-1980. Lynn Anderson died at age 67 on July 30, 2015, at Vanderbilt University Medical Center. Anderson’s memory continues to live on through her legions of fans from around the world.