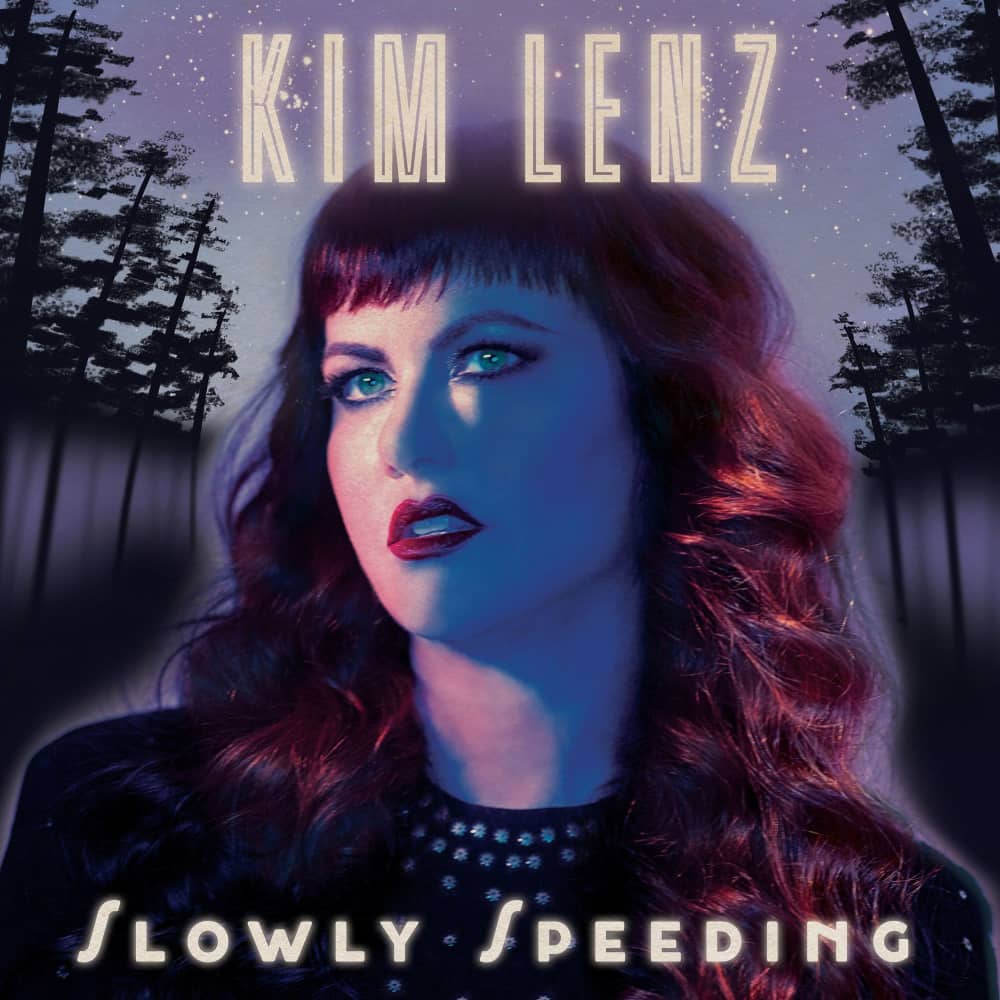 Here I am down in Memphis squirreled away in my hotel room, prepping for today’s activities and check in for my media credentials to cover Monday’s gala extravaganza at the Guesthouse In graceland. Now friends, this is a side article, so I’ll have two more MAIN ones that these will derive from. This is an article for Miss Kim Lenz all to herself, and upon delving further into this, you’ll ascertain just why I structured it this way.

We have all converged upon town today in this crappy weather to celebrate the 2019 Ameripolitan Awards created by Mr.Dale Watson a few years back, and to honor Country and Rockabilly Legend Mr. Larry Collins. Now mind you, I have a LOT of material to cover this weekend PLUS working on several other projects at the same time.

So, tonight I’ll be not only releasing this interview, but also I’m going to cover her record release party for her new album called “Slowly Speeding” . First here is our chat we had this past week, which talks about the album and more! I hope with all my heart you enjoy this interview as much as I did, and I look forward to meeting her tonight and watching her play.

GHC: How did you get started in music?

Miss Kim: Well, I grew up in a very abusive family that turned out to be family that adopted me. I tried to do music when I was a child, I wanted to play piano and they took the piano away. I always had music in me, but it was always not accorded.

It wasn’t really until I finished my college degree at University Of Texas when I met a lot of other musicians and getting into music there. But I had been a music fan, I was always seeing live shows ever since I could sneak out of the house at about fifteen, every night of my life for pretty much forever.

GHC: When did you start Kim Lenz And The Jaguars?

Miss Kim: So, that was about 1994. I was in school at the University Of North Texas, and I got a band together with some friends called Rocket Rocket. We played about two or three shows and it was really just a jam band, we played a couple coffee houses, and that was the first time I had played in front of a crowd.  I really realized this is what I want to do!

That’s when I started Kim Lenz And The Jaguars, I just wanted to play locally really, I wanted to get a gig at this place called Bar Of Soap which was a little bar in the front and a laundromat in the back. I started out of Dallas a little bit, and made a .45 with some friends, and did a few shows out on the road. Then Larry Sloven from Hi Tone Records called, and I was shocked. I hung up on him because I thought someone was playing a trick on me, but he called back. So, I put out a couple records for Hi Tone in the 1990’s before all the small labels went under…Those were good years!

GHC: Was that when you put out “Up To My old Tricks Again”, and “One And Only”?

Miss Kim: Yes, that was all in the 90’s with Hi Tone Records.

GHC: Who inspired you the most to start playing Rockabilly?

Miss Kim: Well, you know I’m a collector of records, and I have been for a long long time. I cannot really put my finger on one person, because there are all of the normal names you hear like for women it’s always Wanda Jackson and Janis Martin, who are amazing. I been lucky enough to play and sing with both of them. But, I love American music and all of the things that go into making Rockabilly and Rock And Roll. But I like old Blues, and old Country.

All of the music that has been created in the 1950’s in this country..I mean black people were making Rock and Roll in the 40’s and even in the 30’s but it was so segregated  back then so…they were making Rock And Roll but the lead instrument wasn’t guitar, it was in fact the piano. So really when Rockabilly started it was the Country folks picking up on what everyone was doing. Everyone really was picking up on what each other was doing, and then we had the lead guitar.

We had Scotty Moore down there at Sun Records. But also I think the thing that people don’t talk about is that Rockabilly at that time when it first started sprung up all over the United States, in all kinds of little record labels that nobody ever heard of. It was a…kind of a local music if you will.  It was before Rock And Roll before it got big, but Rockabilly got bigger, and it just turned into Rock And Roll. When the major labels got it, it was indeed Rock And Roll, It was more of a regional music then, but I’m affected by everything. I’m affected by something new everyday really that I find, like and old Blues or Do Whop record. The voices and history of America, I’m inspired by that.

Miss Kim: The Ameripolitans have been great because they put a lot of us together that we never saw each other before. We were either on the road or in different bubbles. I have made so many wonderful friends doing this over the years. I love going to them, mostly just to meet people. Because it is one of the best places to meet people and find out about Roots Music in the country I think.

GHC: I have enjoyed your music for many many years, you have been to town once or twice but every time I had the opportunity I got sick and couldn’t make it.

GHC: What about the new album your’e releasing during the Ameripolitans? Is it just you solo or is it with the Jaguars or what is it exactly? I heard the first two singles you put out.

Miss Kim: Slowly Speeding and Pine Me. Yes, you know Nick Curran was kind of in the original Jaguars, well he had a passed a number of years ago. Then Scotty Tecce who was the original drummer for the Jaguars passed away like a few weeks ago I think. So it was just a time to let go of the Jaguars name, because that was really in the 90’s.

It was myself and Nick Curran, and Jake Erwin who played on this record, and Scotty Tecce. So it was just time to put the Jaguars name away, and I just did that. But yeah I got Jake Erwin playing with me on this record, we been playing together a long time. He is one of the best upright bass players ever, he plays full time with Hot Club Of Cowtown.

GHC: Mr. Nick he gets mentioned by Hillbilly Casino a LOT

Miss KIm: Nick joined my band when he was 19. We were together a long time, then he branched off and had his own bands and had a wonderful career. Then just got sick with cancer, very poor. He passed away at 34, so it was tragic.

GHC: Are you playing any festivals this year?

Miss Kim: I’m playing Viva Las Vegas in April, then of course my record release party next weekend. I’ll be presenting at the awards as well, then I go to Spain for five weeks, come back and do Viva. I’m working on some crazy ideas for booking because I wanna do something different…..so STAY TUNED!

GHC: Excellent! Well I think this was pretty good chat here, and I thank you for your time.

Miss Kim: Thanks as well, Gary. Please let me know if I can help any other way.

You can order this album and listen to it HERE

Last night was TRULY FUN as I wrapped up the night with a return from downtown Memphis back to the Travelodge where once again at Dad’s Place Miss Kim Lenz hosted her party for the album. Many of the musicians she mentioned in the above interview, I got to see play live here.

Miss Andrea Colburn And Mr. Mud Moseley have become two really good friends along the road, and I got to meet their band last night. I also have some news on the new songs they played for an upcoming album yet to be named or have a release date on.

“Car Salesman” was in the fashion of their classic true to form trashy Country with comical grit and wit thrown into the mix. It mentions a two dollar whore who isn’t free. Their gutter humor and traditional approach to modern Country always enthralls me. Miss Andrea delivers  her vocals with authority and poignant grace, while Mr. Mud’s twang pushes the song forward..when she says PLAY IT MUD..play it he shall.

“Garbageman” is off the new album “Easy Sleazy And Greasy” however they also included another new song called “Little Blue Truck”. Following that up with “Hellhounds”. They covered a Miss Kitty Wells song “Honky Tonk Angels” Then Miss Kim asked them to play one of my favorites as well, the ever popular “Bones”.

Their last two songs were “Sad Country Song” and one of the first songs she ever wrote, “Highway 9” from her first album.  The fiddle player Mr. Cory played some really fine songs in the middle portion like a song called “Cahoots” before playing some solos and a song called “Crazy As Me’.

Miss Kim dipped way back into her older albums with songs like “Zombie For Your Love” off the “It’s All True” album, as well as the song “That’s The Breaks”. This was truly a treat tonight as I got to see first hand some of the musicians she mentioned up above. She maintains her true Rockabilly sound on stage as she does on record, see Rockabilly isn’t a complicated structure of lyrics, it’s usually love gone wrong and that’s the breaks.

“Follow Me” was the album that boasts the songs “Deejay”, and another great song called “Cry Wolf”. Her lead vocals are featured the best on the song “Cry Wolf” , liars and fake lovers beware of this gal and her fury..

We were treated to a very good rendition of her “Slowly Speeding” from the album of the same name, before she went into two songs from the “Follow Me” album again called “Tumble And Fall” and she closed with “Follow Me”. This party was truly a wonderful way to wrap up an exciting day of music here in Memphis.