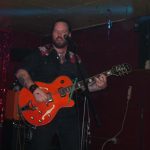 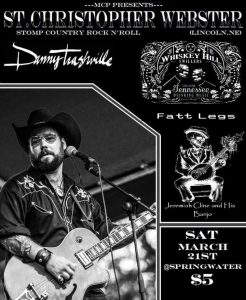 Folks I have not had the opportunity to bring you Saint Christopher yet on this website live. Also on the bill tonight are The Whiskey Hill Swillers Jeremiah Cline and Danny Trashville I have featured the Swillers many times and Jeremiah got a short feature as he opened for Lickem Brown.

Spring water is off 27th avenue and is Nashville’s oldest venue. It still holds its true age well and it is not a bad place to see a show. As I type this the Swillers are loading up their gear. The connection is really fast here this will be an easy job until my short lived tablet battery dies.

I got to have a nice talk with Mr. Jeremiah this time. This is a smoking venue so I’ll warn people now for those who haven’t been here. It is a spacious place and you don’t get crowded as easily. In fact it has an sold fashioned cigarette machine which kind of adds nostalgia. I enjoy his knowledge of the oldest music and oldest artists of a genre he holds dear.

The Whiskey Hill Swillers have added drums and changed to a stand up bass and I am looming forward to hearing them with these changes. The place is filling up pretty good now for its size this isn’t a bad crowd at all. This is how you fight for your local music and local bands especially the ones that live on the road. 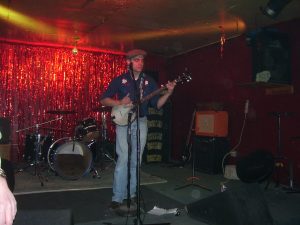 First up was Jeremiah Cline who entertains with stories as well as songs. His first song was called “Big Sciota”. He followed that with “Fall On My Knees”. His next song came with a story of an old prison “Walking Boss” and it was very interesting I’d like to some day hear the entire story. I’m pretty sure his next song was”Old Grey Mare” and he closed with “I’ve Endured”. He brings a very old historic sound to the stage and he knows his history,its always fun to talk with him about old timey music. 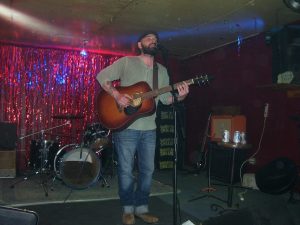 Danny Trashville was next and he said he had been up for many hours,he is a hard hitting road warrior and let me tell you it shows. He is an absolute riot to watch play and his first song was very well written..in fact the very first line grabbed me. His first song was called “Pawn Shop” and I think you should check it out. His second song was called “Belly” and he said it was off his first album. He is a very talented songwriter with his lyrics,and is very inventive in a way everyone can relate to. He also plays for the Hudson Falcons and I hope he got a good night’s sleep because he is a very hard worker. His next song was “The King Is Dead” and was a pretty long song you had to hang on to get the whole idea. His next song “in My Dreams” and “can’t Wait” I missed bits and pieces of as I was talking with a facebook friend.

His next song was called “Want Money Want Stuff” and it was a complete masterpiece. It included the audience and if you can’t relate to this song you aren’t human. His setlist included some really well written songs. Absolutely blew me away and I had no idea of his abilities. Because “Turn Left” was a race car song parody and it was also a good crowd including song..easy to learn and follow in with and a whole lot of fun. And his NEXT song “Greener Grass” was another absolute masterpiece in his writing. The lines within his songs are really well done! He closed his set with “One Wild Woman”. 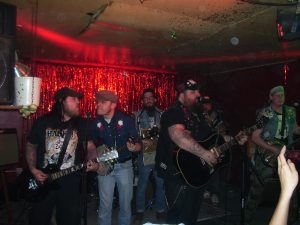 Whiskey Hill Swillers are absolutely growing as a band and have tightened their sound and changed their approach if you will. They aren’t a string band anymore they are more punk sounding and more tight than EVER before. They have added a drummer and an electric bass now and it truly was a different form of the songs I am familiar with. BEST SET I ever saw them play before and I have seen them many times. If you like this type of music you will REALLY enjoy their new format. They opened their set with “The End” and I’m not sure I ever heard that song before I don’t remember O’l D.B. singing but it was nice to get to sit and talk with him last night. They followed up with “Whiskey Calling” and “wanna Know” like I said a lot of these songs were really like hearing them all over again new. It was a totally different format. “Dark” and “Loosing Hope” are staple songs in their set list as well, you will get to hear them every time. ‘Something’s Wrong” and “Hollow Eyes” are always good songs and this time they played a cover song. They played a song by Merle Haggard called “Mama Tried” which is off the 1968 album of the same name. Although it he was released from San Quentin Prison in 1960 it wasn’t until 1972 governor Ronald Reagan granted Merle Haggard a full pardon. His original pardon is now on display in the Smithsonian Institute. They closed their set with “Make It Right”. 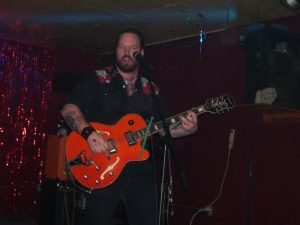 Some people might not like the type of music Saint Christopher plays but to be honest you cannot label it. He proves a good point that you just cannot call it Country or Punk or Metal, and he quickly proves every label wrong. You either like his music or you don’t, there is no in between and I feature it on here because I like it. Who am I to say it’s not hardcore Country? He opened his set with a song I missed cause I was outside for a second but his second song was “1000 Miles” and he had a drummer that flew to a prior show on short notice to play, he did a great job last night. One of my two favorite songs he does “Don’t Come Looking For Redemption” was next and then he played “Revolution MF’er”. His message is clear..there is no labels or corporate love here, organized religion and politics do not exist in this man’s world. He says some powerful things and stands by his sayings in his music and his life. Whether or not I agree is my secret opinion…do I respect him..hell yes I do. He’s honest and he is good to those who come support him. His next song is my favorite “Ride” I relate to it very well.

“Saint Christopher’s Blues” was next and he then played a new song called “Wishing And Waiting Hoping And Dying” and I hope he records it sometime because the message within was powerful in many ways. “Right To Die” was next and like I said this man’s music is different from all others in the way it’s presented. It is some of the most unique music you will ever find. Th next song was “The Devil Always Wears A Suit” and it’s a song that made me think about things even in my everyday life. He closed his set with “Stomp And Shout”, I was struggling with my tablet battery during two of his last songs.

All in All I had a wonderful time out last night and I enjoyed all the new music, the old music and the new formats.
It was one hell of a fun show and it wore my old butt out. I hope that all these guys are careful on the roads and I hope to see you soon.