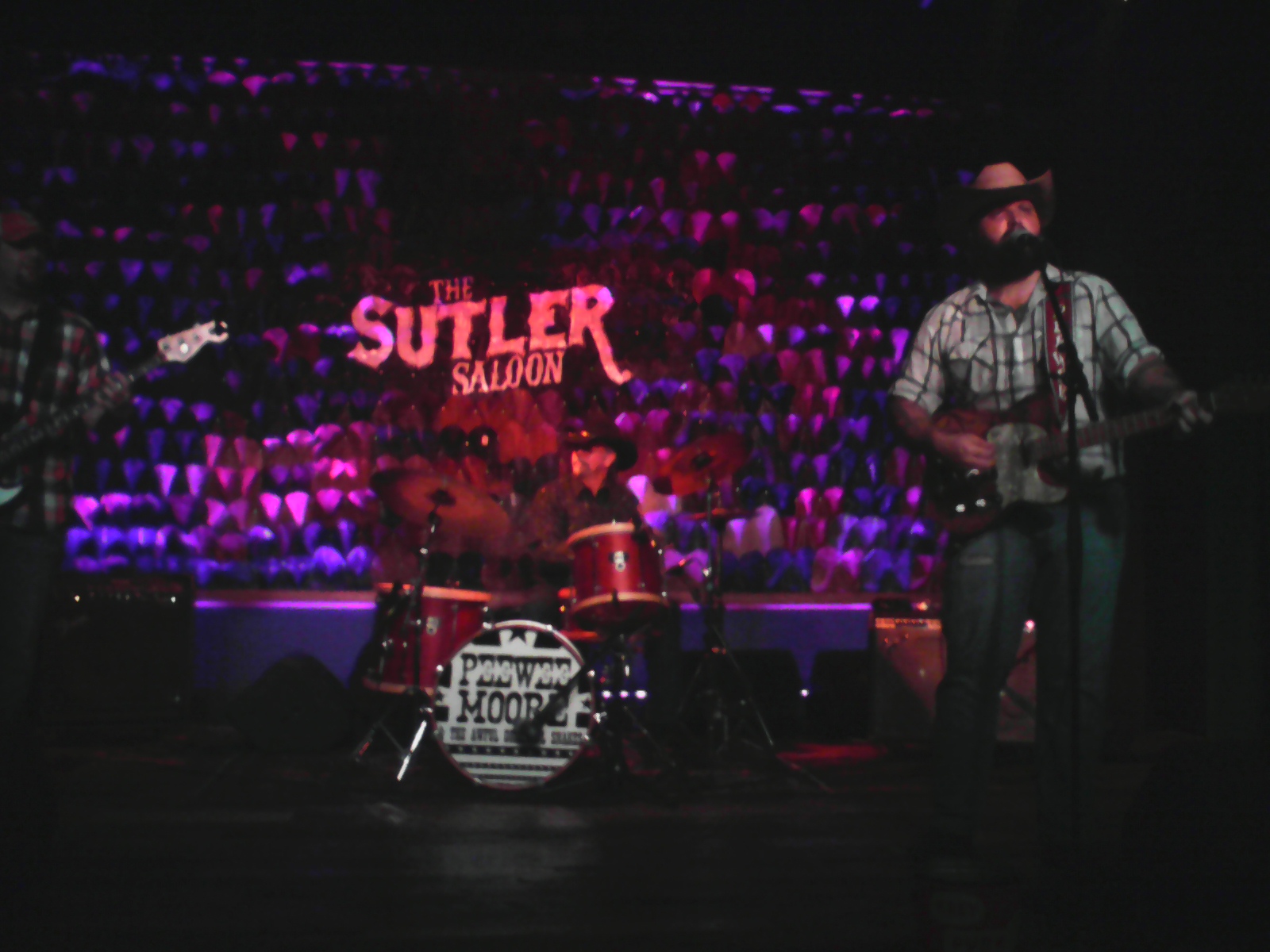 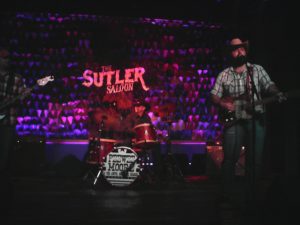 Well folks I am pretty sure you heard Little Jimmy Dickens died…I’m sure
Jimmy would want the show to go on. I was in town for website business and to do
some other things. I first went to visit my good friend Kenneth Marr who was the one that
designed my logo and manufactures my stickers.

I’m over on Franklin road tonight at The Sutler and this is
a really nice place with what looks to be real good food. This is a reservation place so
if you want a good table for a show call and make them.

Peewee Moore And The Awful Dreadful Snakes are a honky tonk band
I have featured on here many many times. He is a frequent performer at Muddy roots and I covered his
Slider House show. I talked to Boots and the new album is being worked on and will be distributed
through Rusty Knuckles.

The sound check was Gypsy Rose, and he is just going up now…I’m excited.
I’m being bounced around a lot in the back by the stand up bar and the venue is VERY loud
and It’s hard to do this much but it is a nice place, the stage is nice.
I missed the opening song but he followed up with “Making Sure The Story’s Being Told”.

HE IS unloading all his own great songs playing ‘Cotton Pickin Woman”…what a great show.
HE IS playing us covers like “Big City” from Merle Haggard, and his lonesome Honky Tonk sound
is tearing this place up.
The Saloon type atmosphere of this venue is really cool to see an artist like Peewee Moore.
I’m just sad he doesn’t get to Nashville more often than he does.

He is playing “Aint Got Nothing” right now..there is history on the walls of this place,
much like Bobby Mackey’s and many more historic venues older than this one.
I been talking with some folks from Texas who run a radio show and I been turning her
on to several acts up here. Networking….is how we fight this battle.

‘Leaving With the Band’ is always a good upbeat song I like to hear them play.
Folks I want y’all that are reading this to know these guys DO PLAY for tips
and your money keeps these guys rolling to the next show.
He is playing “running Moonshine” right now and Boots is in prime shape on them drums!

He’s playing “Long Time Gone” and they are playing in sets like most bands do
taking breaks in sets. VERY NICE looking food and if not for having meetings in town
I would have ate here. Heck they play Buck Owens on the overhead while you dine
and Wayne the Train Hancock!

Peewee is in the planning stages of a music festival called “The Honky Tonk Tent Revival”
which will take place Memorial Day weekend near Monteagle Tennessee.
I’ll report further information on this event as I learn it from him and all about the event.
The second set is beginning with an upbeat song full of twang called “Truck Driving song”.

This set is focused on Truck driving songs and includes “Six Days On the Road” by Dave Dudly.
I’m cross working on a Jimmy Dickens article for you folks..you can be sure of it. Honestly I
been working on several different projects with the website this weekend to bring you the BEST
coverage on independent music I can.
He’s playing “Truck Driving Man” which was written by Terry Fell in the 1960’s..it was of course
made commercially popular by Buck Owens.

“Down Every Road” is a Merle Haggard song I have heard him cover before and do it well.
He did his murder ballad (and one of my favorite songs) “Nickajack Dam” and followed it up
with “Good Timing Woman”.
He played a piece of “A Boy Named Sue” along with a great instrumental break.

“Eleven Months and Twenty Nine Days” is a song many people cover..but not with as good
of twang as him or Whitey Morgan.
All in All if you go to a Peewee Moore show you’re in for a REAL treat, I bought some CD’s
Cause I couldn’t believe there was no cover. I offered to pay and they said it was a free show.

Folks when these people play “free shows” let’s BUY STUFF and keep them functional.
This is no different than tipping a waitress or haircut barber. Take care of friends
and support this art.