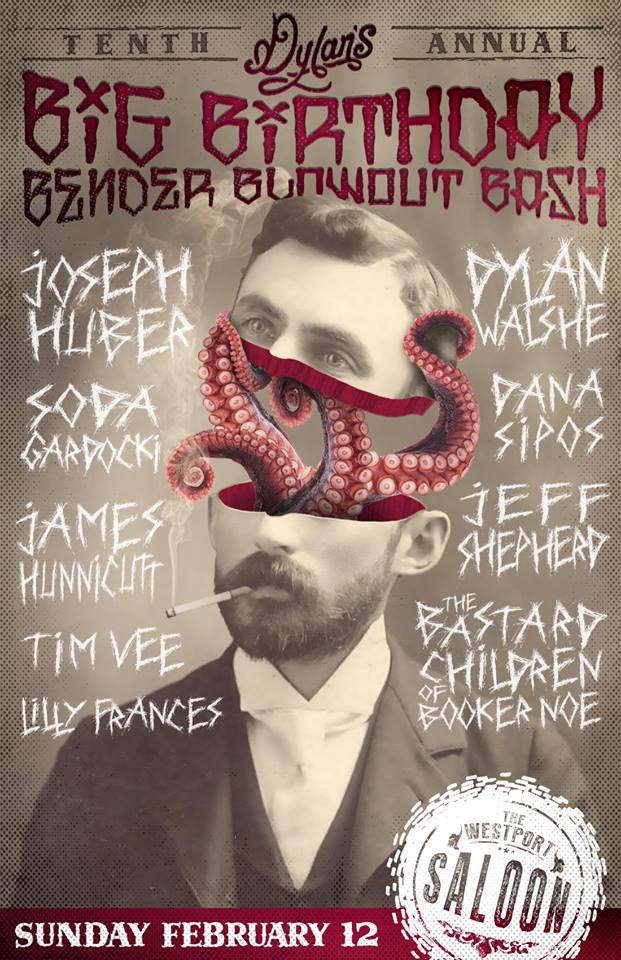 This one is really just a huge party thrown by my friend out there in Kansas City Dylan Thomas Dorrell who runs a shindig called Double D Productions.  Along with the folks over at Muddy Roots whom are some of the top contributing folks to my website present the tenth annual Dylan’s Big Birthday Blowout Bash 2017. This transpires Feb 9-12th 2017 at three venues in Kansas City, and the separate dates will have the band AND venue links available for you to click on to do some research if you’d like to.

I’ll be down there in May for the Westport Roots Festival if all goes according to plans sometimes with me the old body cannot always do it all anymore and I’m just taking life one day at a time. As long as I can do this, I plan to I can promise you that much. as far as festivals go, I try to change up some of them every year so I can juggle many of them but I’ll be honest I have my favorites and a few of them are just juggernauts on the scheduled bands.

I have literally over 100 current lineups POURING into my inbox from California to New England with Americana, Red Dirt, Bluegrass, Country, and Bluegrass..and other genres as well. There are quite a few things I would like to bestow upon all of you concerning this event, some news about a few of the bands here on this list I don’t always get to write about as much as I would like to.

I recently had an enlightening conversation with Mr. Travis W.T. Newton from a band I covered a few years back at Muddy Roots Main festival in Cookeville, County Graves. If you will recollect my previous coverage from Muddy Roots, they performed a damn fine set in what was their last performance together in that juncture. Back in 2015 HERE is my write up from their performance on stage 3. I shall NEVER forget that incredible gospel medley they closed their set with last time, now for the first time in awhile they are returning to Davey’s Uptown Ramblers Club on the Sunday leg of this festival type deal.

I recently spoke with Mr. Travis Newton concerning the ordeal and here is what he had to tell Gary Hayes Country:

This is going to be an interesting one for us, because the lineup is going to have two of our best friends that never played with CG before on top of the original three piece that is Nate McReynolds (Upright), Benjamin West (Mandolin), and myself. The two new guys are Baker McKinney from Shawn James & The Shapeshifters playing banjo, and Tyler Giles playing pedal steel. It’ll be a really fun and really intense show and I can’t wait.

As far as the future goes, I can’t really say what’s gonna happen. We always plan to play at least once a year and have a damn blast when we do. It’s sort of difficult because we’re all so spread out, but worth it when it all clicks. Nate and Ben are two of my best friends in the world and my two favorite folks to play music with. There’s gonna be something more for County Graves down the line at some point, I’m just not sure what exactly yet, there’s something on the horizon though.

The Urban Pioneers will be appearing on the Friday leg of this event and Their latest album “Feast Or Famine” made my TOP 50 OF 2016. I recently was interviewed by Mr. Dustin Doug from Pirate Farm Radio where I briefly elaborated on all 50 of my choices, also they are busy filing their new variety television show “High On The Hog” which I’ll write more about at a later time.

I’m positive as they embark on their latest tour that we will be treated to some more wild onstage antics and offstage mischief by this trio. Also if you may not have heard they will be rejoining Mr. Jayke Orvis for a Broken Band reunion ONE TIME ONLY EXCLUSIVELY at the Westport Roots Festival that you can read more about HERE.

Currently I am busy checking out NEW albums released in 2017 and Roots Music Legends Split Lip Rayfield are no exceptions. “On My Way” is a twelve song masterpiece that is high up on my suggestion list for 2017 already. I got to see them last year at Muddy Roots on stage 1 and they killed it out there, I spent a lot on cd’s during this set.

Dates are set.
I’m thrilled to be once again be teaming up with The Westport Saloon to bring you this party. 4 days of cheap fun.

As usual, Friday and Sunday are FREE thanks to the good folks at the Westport Saloon.
Saturday price kept as low as possible thanks to Davey’s Uptown Ramblers Club!
Thursday will be cheap. Think $1.25 a band or so.

The greatest hotel IN THE WORLD, America’s Best Value Inn on Broadway has offered us a deal this year if you book directly through the hotel and don’t use the internet. THE GREATEST HOTEL IN THE WORLD!!! AKA…it’s kinda shitty but closest to both venues in Kansas City and they like us and never give us shit for party rockin…

I do not believe I need to go over any “rules” as with my other festival articles to be honest, this is not a camping event and it’s all indoors as far as I know. Each venue has it’s own rules and it’s mostly just common sense PLEASE just observe rule number one “Don’t Be A Dick”.