Alan Jackson, Muddy Roots, The Ernest Tubb Record Shop And Others Strike Back To Save Downtown Nashville. 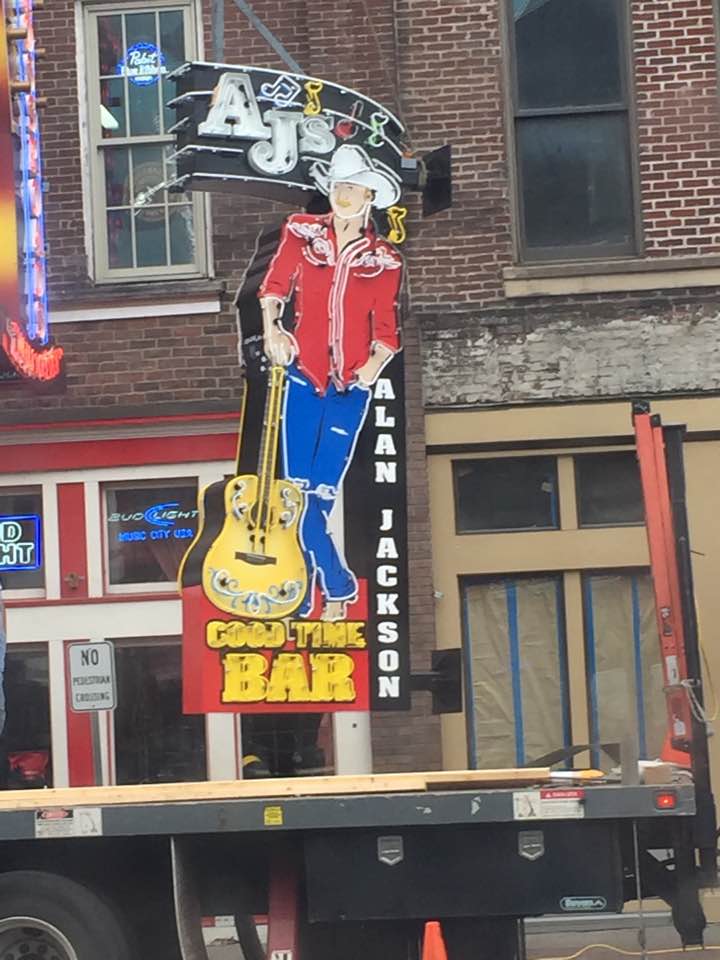 Just about six months ago the rumors began and the dark cloud descended upon downtown Nashville and REAL Country music as a whole. The Wheel and The Full Moon Saloon both announced their demise, right after the sad outcome of Printer’s Alley and a few other important historic locations were leveled.

Music Row and the New Nashville establishment has been trying like all hell to vanquish Traditional Country Music as a whole by taking away forcefully pretty much every building and outlet we have to combat pop country. Many people were still happy with high hopes of a turnaround with Mr. Jason Galaz and Muddy Roots announcing the opening of The Vinyl Bunker which is an underground record store located within the parking structure of the L and S building, around the corner from the Ryman. With the Vinyl Bunker AND the E.T. Record Shop supplying us with real music the fight is even more stronger now than it’s EVER BEEN.

This store gives consumers the opportunity to purchase independent label albums and artists arranged BY LABEL and a hub for ALL BANDS Muddy Roots related for people like me to come spend our paychecks. But seriously folks the opening of his store really busted the chops of the suits and ties that have NO CLUE WHO James Hand or Dale Watson are anyways.

Then came the the awful news that two of OUR beloved beer joints we had to hear Traditional Country Music were closing. And people real and fake began to lament the demise of the bars, I say real ones that actually went to the bars and patronized the music. I said fake ones because with EVERY situation you get the people that bitch and cry but never go spend money there to keep them open.  I’ll admit myself I need to get down there MORE than I do and laid partial blame upon myself for that I’m NOT a member of the digital download crowd that are the couch warriors.

The same thing happened to Ernest Tubb’s Record Shop as Mr. David was forced to close the Opryland location this year however the Midnite Jamboree still continues the Tennessean recently published a HUGE ad advertising lower broad and all it’s offering but conveniently omitted Ernest Tubb’s Record Shop completely sparking a major backlash from Mr. David McCormick the owner. Here is a copy of his rebuttal statement:

A message from David McCormick…

I want to congratulate you all on a great job for the special insert in last Sunday’s edition of the Tennessean. Once again, you folks have left out one of the most important elements and world tour destinations…the Ernest Tubb Record Shop that has been a Nashville staple and worldwide tour attraction for almost 70 years!!!

I consider this another royal insult from the Tennessean and all of you. If you would just check your history, you would see the importance of this famous Nashville landmark but I suppose we are not “hip” enough since you did a great job covering other venues that are relatively new compared to the record shop that provides (at a cost of nearly two thousand dollars a week, the world famous Ernest Tubb Midnite Jamboree a WSM radio show that has originated since the same time the record shop opened its doors on May 3, 1947.

I’m sure most of you don’t even know we exist but I’ve become used to being “overlooked” by the Tennessean during my 48 year tenure with Mr. Tubb and his record shop. Speaking of, if you checked your history, Owen Bradley (most famous record producer that ever was, though some of you may have never paid enough attention to know his name or what he did) said in a well documented interview that Nashville changed its name to “Music City USA” the day Ernest Tubb came to town.

In addition to this, most of you more than likely do not know of what he did for this town but has been looked over for an outstanding contribution he made to the music industry. He was the first to insist on recording here when it wasn’t (as you say) “hip” to record in this town. He brought electrical instrumentation to the Grand Ole Opry and the first to use a full set of drums when he drummer had to play behind the curtain because that wasn’t allowed on the stage at that time. He also brought the first country music to two sold out shows at Carnage Hall in 1947.

I won’t bore you with much more I can say here. I consider this another “slap in the face” for all He did and we have since done in the record shops for making this a world famous tourist attraction to downtown and all of Nashville. That is the sad thing about this town. Our legends are dying out and the face of country music has drastically changed.

We’re working hard to preserve what little is left and the thought of you leaving Ernest Tubb and his record shop, the contribution he made to this industry and city are overlooked and almost forgotten. Thank you to all of you who continually help to “bring in the new” and “forget about the old” but let me assure you, Ernest Tubb Record Shop, The Texas Troubadour Theatre, the FREE ADMISSION Midnite Jamboree his and our legacy will live on….long after all of you folks are gone.

Then came the extra special news of all….the announcement of Alan Jackson purchasing the Wheel AND the Wheel Cigar bar for an amount that was reported but (to me) not relevant. What WAS relevant was the fact he was only changing the name to A.J’s Good Time Bar, but the format and music would remain the same EVEN the bar staff that wanted to remain could do so.

The bar itself is named after his song “Good Time” which included the world record for longest line dance to date. There will be TV’s showing classic Country themed movies and it will also display many items from Alan’s decade spanning career.  So just as Tootsie’s takes a sad unfortunate 180 and goes to people in bedazzled jeans (I call them sparklebritches) singing Nikki Minaj and Darian Rucker cover songs, right next door you can still go see Sarah Gayle Meech and more!