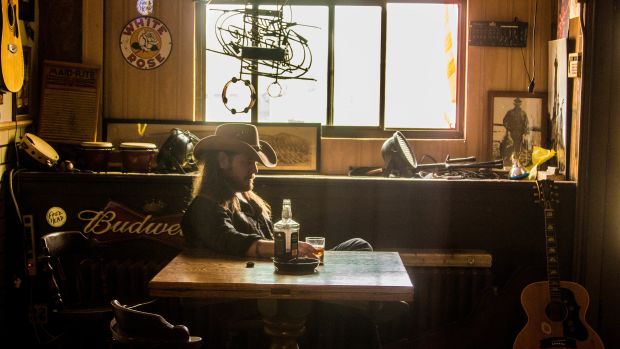 Craig Gerdes is a new name when it comes to the outlaw country scene.  His debut release for Sol Records is called Smokin, Drinkin and Gamblin and it’s full of songs about the ramblin’ life.  Gerdes has been getting a lot of buzz for his stellar cover of Johnny Paycheck’s “Slide Off Your Satin Sheets” which features Paycheck’s original steel player Jim Vest.  Mr. Vest adds a lot to this tune and it’s a perfect introduction to this album as it’s first single.

“Redneck Sonsabitches” tells Gerdes story about going to Nashville with hopes of being a country music star only to have his dreams bashed.  It’s a rowdy track that is sure to get honky tonk crowds going.  Another favorite is “Good Ol’ Days” which features Gerdes talking to an old timer and reminiscing about the past.  The good old days may be gone, but in my opinion we’ve got some good days left if there is good music like this to carry us through.

You can’t miss this album’s high mark which is “Dead In A Box In Kentucky”.  It’s a murder ballad that’s bound to be an outlaw staple years down the road.  After covering Paycheck’s hit, Gerdes takes his own turn at a cheating song with “Learned From The Best”.  It’s a good form of lyrical revenge in which Gerdes blames every heart he breaks on his own ex who broke his heart.

This is a great debut for Sol Records by Craig Gerdes.  I love a good outlaw record and you’ve got it here from top to bottom.  You got anti-Nashville songs, cheatin’ songs, an outlaw cover tune and even a murder ballad.  Craig Gerdes hits all the marks and hits them high.  Jim Vest taking a turn at pedal steel helps add some authenticity to the album and gives it that extra flair it wouldn’t have otherwise.  Smokin, Drinkin and Gamblin is available everywhere digitally February 16th, 2018.  You can also get the CD on Craig Gerdes website.  There will be a double album release party featuring Dallas Moore at the Nashville Palace in Nashville, TN on February 14th, 2018.