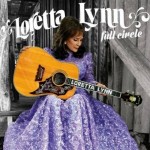 I have never followed any special format or style until I began covering festivals in the fashion I do, until then I never really ran things on this website anything close to others. I don’t really do “album reviews” or interviews mostly because of lack of time, I enjoy being a music collector and a fan. I do run this website as much as I possibly can but I also love to attend shows and buy and listen to music. So last year I decided to feature albums in a multiple type article fashion.

This is truly a landmark album in many ways for 2016, and quite possibly one of my top 5 of the year already. I try not to make those types of decisions until right around Christmas break however THIS album is just so fabulous I cannot say a choice has not been made.

This album was produced by John Carter Cash and was recorded so well that it showcases her vocals better than some of the recordings in her prime, and honestly I’m not truly sure if technology had anything to do with any of that. She just absolutely shines on this project in many ways, even on the cover songs and re-recordings like the classic woman got balls “Fist City”. Fist City was originally released in 1968 and consequently she was banned from Country radio as a result for a brief time, along with other songs of hers which at the time were far from acceptable. However commercially outright it was the second of her sixteen number one hits and one of Owen Bradley’s finest productions.

I want to point out another fine crucial point here, the pedal steel was really good. it was done by Robby Turner who currently plays with Chris Stapleton and is having some medical issues right now so say a prayer for him. He NAILED IT on “Old King Coal” from Sturgill Simpson’s High Top Mountain, and played on many other albums.

She opened the album with “Whispering Sea” which was the B side of her first single “Honky Tonk Girl” that she released in her early 20’s along with two other songs as she signed her first recording contract in 1960, and there was another classic song called “Everybody Wants To Go To Heaven” which was from an album called “Hymns” from 1965.

She included some truly timeless classics from the Carter family like “Black Jack David” and “I Will Never Marry” which were done in classic Loretta Lynn form just as her last release “Van Lear Rose” was. She has not strayed from her true roots or songwriting style and on March 18th she kicks off her tour with no signs of retiring or stopping.

Also appearing on the album are Willie Nelson (whom I shall touch on later) and Elvis Costello all were in truely tip top form both vocally and production wise. This IS A MUST MUST MUST have!

This twenty four year old newcomer hails from Virginia and I heard about her for several weeks before I checked her out on X Box music and then she was featured on W.B.Walker’s Old Soul Radio Show where I heard more of her impressive debut album. The song “Where I Stood” was one of the finest well written songs I have heard in 2016.

ANYBODY that can sing a song A Capella like she can on “Ain’t Nobody” earns my total and undivided attention and respect. Along with many others on the album like “Lullaby” and one of my favorites “You Say” put me to mind of Rachel Brooke and Lydia Loveless. I shall include some tour dates fro her on here and how about a video from her recently that I truly enjoyed. There was some fine steel guitar work on the song “Go On Lovin'”, and I would highly recommend this album to add to your collection!

I must admit I have been waiting for some time for this album to be released, and the name fits the album. It is indeed REAL Country Music however the only thing I disliked about it was it wasn’t NEW REAL Country Music. Most of the album was cover songs or redone classics from other artists, now that’s NOT a total letdown because the song “When A Man Can’t Get A Woman Off His Mind” wrote by Whispering Bill Anderson and made popular by Craig Morgan is a damn fine choice.

Another good song was “Bitter They Are The Harder They Fall” from Larry Gaitlin was actually one I forgot about and was a nice refresher to my memory in fact I almost liked his version better. “A Bridge That Just Won’t Burn” is an old Conway Twitty song that Jim McBride and Roger Murrah wrote, most of you will recognize Roger from writing Waylon’s famous autobiography and other things he did for Waylon.

“Ashes To Ashes” was another damn fine remake of a classic song from the album “Honky Tonk Crazy” in 1987. Much like the Loretta Lynn album time has not diminished Gene’s voice of pure solid country gold and he still delivers songs in a hurtful fashion. That one lone aspect of his has not been dismissed by his spirit, apparently however he has abandoned writing or cutting as many new songs…whatever the reason it is still a noteworthy album, but missed my top 50 list for 2016.

This is the fourth album from this Colorado boy, actually he isn’t a boy but you get my point. I MUST tell you not a lot of websites are going to tell you about him WHY I have no damn clue because he absolutely WOWED ME. First off this album was produced by Lloyd Maines which is already a green flag in my book.

This album isn’t what you’d find on Country radio today…so It’s pretty safe to say that’s why it’s included in my website article! I have to stop by and pick up the rest of his albums for SURE. The opening song on the album “This House” was not outright the song that grabbed my attention but it was good.

“Country Boy” was for sure a song that if they DID put it on radio it would become an instant smash I assure you, it has grit,drive and HONESTY. It has all the factors of what pop country is yapping about but in HIS songs those factors are REAL, you can feel it. “Better Than You Found It” was a really REALLY good paint my mind a picture song that any listener can just close their eyes and see the song, and it had a good message.

He’s a pretty darn good songwriter too as is evident in songs like ‘Ghosts”. If this fellow comes to an area near me I will gladly make an effort to make his show and cover it on this website I promise you!

Travis Harris And The West Coast Turnarounds: The Truth And Other Lies

Once again a second GREAT album from my east Kentucky friends over at the West Coast Turnaround camp! I MUST SAY I LOVE the way he presents the songs, I just enjoy his voice and the way the band plays. Now I’m going to say this outright the best song they do is “High And Then Some” and I don’t rightly reckon they will ever top it….BUT

Darn it this album just flat out kicks Country Music’s ass in both production and music, YES it is that good. It’s a MUST HAVE for your collection in many ways and I cannot wait to see this band again and cover their set. They always have a stellar steel guitarist on stage with them, and Mr. Travis himself is a damn fine fellow that I enjoy seeing at Muddy Roots Festival he’s a good friend.

This album opens with a foot thumping “Moonshiner’s Last Ride” which is of course about running shine (I mean what else do we do up here), it isn’t playing monopoly. These boys are for SURE on my go to list for cruising music in the truck on the interstate! “Burn It Down” was actually my favorite song on the album, and at first I thought it was the same song from Shot Time And Cigs but it wasn’t. I just like the way he sings on this song it’s a slower song but dammit it is a rabble rousing song that makes me want to drink a wagonload of Pabst.

This was a shorter album which boasts ten songs but darn it they are ten mighty fine songs and altogether the album is quite appealing to REAL Country music fans trust you me, you NEED this album. My favorite thing would be to have this on LP oh man that would be nice…wink wink nudge nudge. “Million Dollars A Day” was an absolutely TOP NOTCH song about the state of Country music now and it’s loaded full of steel guitar that we so dearly love on this website!