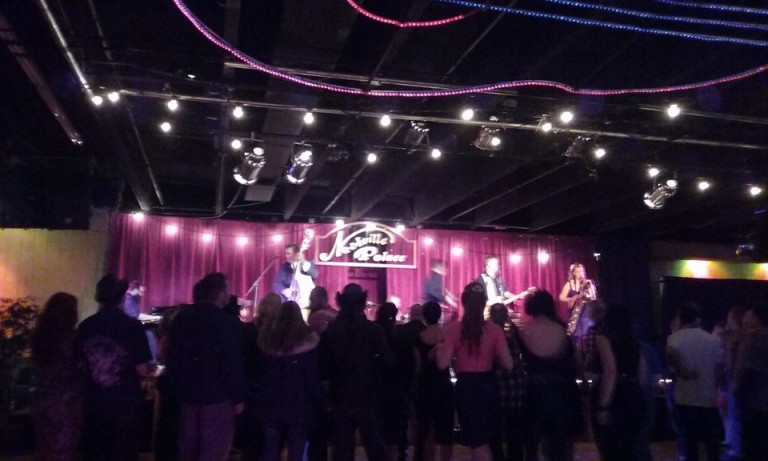 Folks its time once again for me to be out and about covering the shows, after all that’s exactly what i had in mind when I began this website. I am always going to be a huge presence within music in every from I can be, and tonight I want to tell you my readers about a tragic thing that happened however it turned into a truly positive event that clearly proves this kind of music IS a viable market.

I’m here at the Nashville Palace in the Opryland area to cover what was supposed to be Wanda Jackson but due to some unfortunate medical issues Muddy Roots had to replace her with an artist I haven’t covered since spring of last year and that is Big Sandy. Despite the unfortunate news this turned out to be a SMASHING success with an overwhelming crowd of enthusiastic people and GREAT music.

Also playing tonight are one of my favorites Hillbilly Casino and also a local Icon from my area Rockabilly Legend Billy Harlan, MuddyRoots has been in the studio for some time with Billy in historic Studio B and you can read more about that HERE.

Very powerful opening song called ” I Wanna Bop” was followed by “Proud Mary” made famous by CCR and others. There were other super classic rock covers like “Super Love”. Age has certainly not taken any toll on Billy Harlan in any way, he still fills up the dance floor. Just as strong as he did many years ago. His voice and style have not diminished in any way.

He also played a truly great rendition of Ralph Mooney’s Crazy Arms which we all enjoyed very much song with one called “My Faith Is In Your Hands”. He included a John Anderson song called Swing’n, and a Chuck Berry tune called Johnny B Goode…ever heard that one? And Hey about Blueberry Hill by Fats Domino before he closed his set with ” I Wanna Bop” again.

Hillbilly Casino is always a sure bet for rowdy fun evening every time you see them. I have covered this band on the website many times in the past and I can assure there will be many future times as well.  From the very beginning of their set the usual chaos ensued as they played their second song called “Debt With The Devil”. Tonight there were a few songs I have never heard before live however my favorite is still ” Big Dan”.

However the songs “Blame It On The PBR” or “PBR” was a popular song tonight as well as “Heartburn And Heartaches” off my favorite album and along with another great song called “Jibber Jabber” they once again knocked their show out of the park. I would always recommend their live set to anyone on this website and the addition of Miss Mary Rodgers on the Saxophone it really is a party, she has a hell of a stage presence!

Last night I heard one I did not recognize and I’m not truly sure if it was cover or an original I have never heard of and I’m pretty sure it was called “Got More Blues Than Greens” and they had the whole place dancing and jumping around to their tune “80085”. This was truly a remarkable show for my reasons previously listed, and it was not even over! Big Sandy wasn’t even on the stage yet.

Big Sandy is a local Legend on the west coast in the California area and comes to town for the Nashville Boogie and I’m very blessed to have been a part of this show. He opened his iconic set with “Too Much To Me” and began acoustic and soon had Mr. Geoff Firebaugh on bass and Matthew Armn on drums and Eddie Angel on lead guitar. Eddie Angel plays for a really cool band called the Planet Rockers, go check them out as well.

“Hip Shakin Mama” was next and he played one more before playing “Alone With You” by Faron Young which he covers better than many others that I hear do it. It kind of makes me wish I lived in other regions so I could see some of these bands in their native turf. “Hot Water” was an original OLD classic that I truly enjoy hearing on vinyl and have for many years along with “(Yamma Lamma) Pretty Mama”.

He played some Elvis Presley tunes and also played a song called “Six Foot Down” that I truly enjoyed and followed that with “Oochie Coochie” and a couple of classic tunes I wanted to hear him play called “Chalk It Up To The Blues” and one called “Tequilia Calling” and he closed his set with a song Mr. Nic requested that is AWESOME called “Jumpin From 6 to 6”.

When you compliment a truly remarkable show like this with a truly wonderful young lady like Miss Julea Thomerson with one of the greatest minds of music I have EVER witnessed. I was amazed with her playlists and what she knows, and I am always looking for minds that operate like mine…she is one. What a sweet and passionate woman she is!