Cody Jinks At The Ryman: Part 2: A Balcony Perspective. 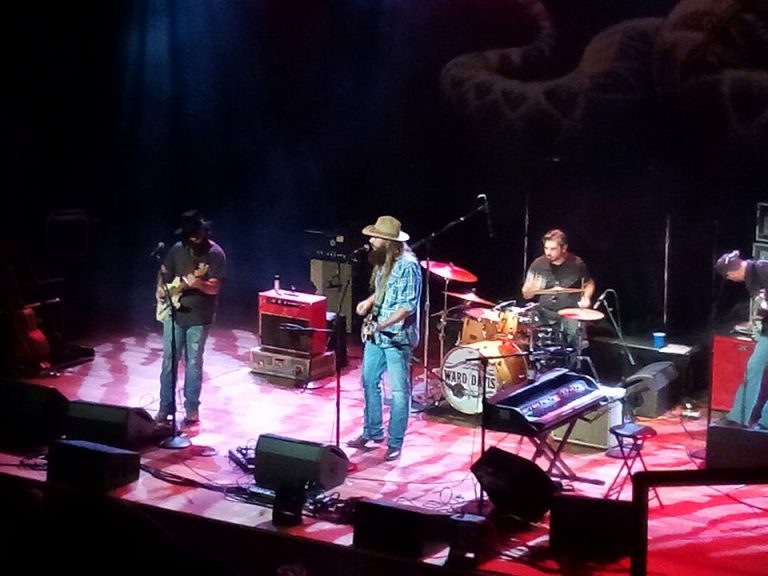 This past weekend (October 20th and October 21st), I made a trip up to Nashville, TN to see Cody Jinks play at the Ryman. I only had tickets for Saturday night, but I planned to make a weekend of it. I spent the weekend hanging out with Gary so much of my article will mirror his.

Friday night we got into Nashville late. We caught a bit of Sarah Gayle Meech at Layla’s. The place was packed even with a crowd of people already heading into the Ryman for Friday night’s Cody Jinks show. I haven’t seen Sarah since she played Muddy Roots in 2013. While we were at Layla’s for her set she played through several originals and covers. We eventually headed over to Robert’s next door to catch a bit of the Don Kelley Band. They have a killer guitar player and did a great extended jam of Ramblin’ Man.

We had planned to hang out at Robert’s and catch Sarah Gayle Meech’s set there, but the place got too crowded and we had a long day on Saturday so we left about 10:30pm. I found out later that evening through the Flocker Facebook group that Cody Jinks himself played a couple of songs on the Robert’s stage that night. He ran through Waylon’s “Are You Sure Hank Done It This Way?” and Merle Haggard’s “Mamma Tried” with an assist from Sarah Gayle Meech. It would have been amazing to see this, but we got some much needed rest for the day ahead.

Before going further, I have to comment on how much Broadway has changed. When I was there in 2008, the main attractions were Layla’s Bluegrass Inn, Robert’s Western World and the Ernest Tubb Record Shop. Since then so many new places have opened up it is crazy. Those are still the main attractions if you want traditional country on Broadway though.

We got good seats at Robert’s Western World this time and hung out there until it was time to go into the Ryman. Eileen Rose and The Silver Threads were playing and did a full four our set of country classics. I was able to
request Jerry Reed’s “Eastbound And Down” and Johnny Horton’s “Honky Tonk Man”. Both are personal favorites.

I highly recommend squeezing into Layla’s Bluegrass Inn or Robert’s Western World for a fun filled day of country music. These establishments have classical country acts playing all day from open to close. A trip to Nashville isn’t complete without stopping in.

Anticipation was building for the main event of the weekend. Night 2 of Cody Jink’s 2 night residency at the Ryman Auditorium. Excitement was in the air as many people had been to night 1 and had already witnessed an
amazing evening and were ready to do it again. This night would be my first time seeing Sunny Sweeney, Ward Davis and Cody Jinks so I was ready for it.

Sunny Sweeney got the night started off right with a full band set that heavily featured tracks from her latest album Trophy. Some of the highlights for me included a great performance of my favorite Sunny Sweeney song “Pass The Pain” and “Everybody Else Can Kiss My Ass” which was a great live crowd participation song. It was a short opening set and I hope to see Sunny play a longer set in the future.

Next up was Ward Davis. I was less familiar with Ward’s music going in, however I had enjoyed his album 15 Years In A 10 Year Town so much that I bought a copy at the merch table prior to the show. His live show blew me
away. He did a rendition of “Highwaymen” with Whitey Morgan and Cody Jinks joining in on the third and fourth verses. He also did a couple of favorites from the album “No Going Home” and “Unfair Weather Friend”.

He played a couple of songs which should appear on his next album. These songs were titled “Geronimo” and “Colorado” and I think “Colorado” has the potential to be a radio hit. It’s a co-write with Cody Jinks just like
Cody’s big hit “I’m Not The Devil”. He closed out the set with a stirring rendition of Ronnie Milsap’s “Stranger In My House”. I quite enjoyed Ward’s set and he’s got a new fan here. I’ll be looking forward to his next album.

Finally, the main event of the weekend was Cody Jinks. His band comes out to the same walk out music Metallica uses which is Ennio Morricone’s “Ecstasy Of Gold”. At this stage in their career, Cody Jinks and The Tone Deaf Hippies are top notch. I put them on par with Jamey Johnson’s band or Willie Nelson’s Family Band as one of the best outlaw country bands in the world. They played a long set around 2 hours that includes just about everything you would want to hear as a fan.

The set focused heavily on the albums Adobe Sessions and I’m Not The Devil but also featured a healthy
number of songs from previous albums. Some personal highlights included “I’m Not The Devil”, “The Way I Am” featuring Whitey Morgan, “Cast No Stones”, “We’re Gonna Dance”, “Vampires”, “No Guarantees”, “Chase That
Song” and “Fast Hand”. It was a set heavy on original material that is sure to please any fan.

They even did their cover of Pink Floyd’s “Wish You Were Here”. With these shows at the Ryman Auditorium, it feels like Cody Jinks has moved up a notch in the world of country music. The days of seeing him at smaller venues are all but over and he has a band that is fit for the big stages he will be seeing in the near future. I fully believe the sky’s the limit for Cody Jinks and it is a great time to be a fan of traditional and outlaw country music.