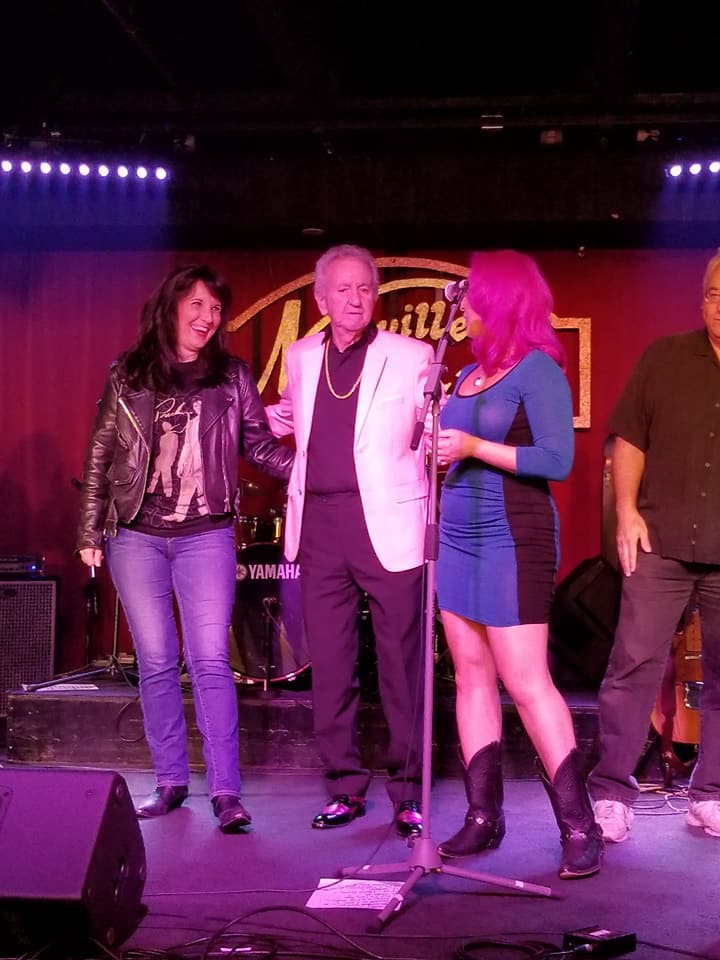 Yep, here I Am again at the Nashville Palace for yet another weekend of great live music. This time I’m here on behalf of Muddy Roots as he throws his first ever Music Valley Jamboree. You know he’s really trying hard to grow the already booming Nashville Boogie within the local Country Music scene here in Nashville. Mr. Jason has proven time and time again that local music IS tangible and wanted by doing things like bringing acts like Mr. Woody Pines to the Opry house.

The Nashville Boogie is a whole new scene for some, and for others like me and this website it is a hub of comfort. I heavily argue with people from the Texas scene ALL THE TIME that there IS REAL Country Music in Nashville, it just needs to be exposed to the people…and I do that heavily.  It truly does my heart a world of good to promote not only people like Miss Margo Price but also ones like Miss Kristiana Murray, and Miss Tommy Ash.

On weekends I tell you what, the Palace front bar is one of the best GO TO places now because of the staff, and the easier parking than downtown. Plus you don’t pay an arm and a leg, and you get bands like Mr.Kyle Eldridge And The Rhythm Rounders out of my home state of Kentucky. This young man tears it apart much like Mr. Julian Davis and the Heyburners, and Young Miss Emi Sunshine. He’s playing a REAL FINE SET here right now, consisting of  Mr. Kyle Eldridge – Guitar/Vocals,Mr. John MacQueen – Upright Bass and Mr. Justin Dunwiddie – Drums.

This video is one of his originals called “Get Up And Leave This Town”. It’s still early tonight folks and there isn’t a large crowd yet but the beers are cold and the music is RED HOT, I’m already enjoying myself here tonight. This young man is easily displaying WELL TRAINED chops on his guitar, and his band is ON POINT.

He opened his set with a song called “Just Can’t Live That Fast” and another called “Too Hot To Handle” before going into “San Antonio Rose” was the 1940 signature song of Mr. Bob Wills And The Texas Playboys whom obviously heavily influenced him here, as he plays another one called “I hear You Talking”, which was also covered by Asleep at The Wheel, and Mr. Faron Young in various forms.

“Blue Skies” was next followed by a VERY good version of the Bluegrass Classic “I Ain’t broke But I’m Badly Bent” and another with great instrumentals called “Rockin Gypsy”. Also, his set included a song called “Just Too Lazy” from the Farmer Boys of 1955, the album being Charming Betsy.

Mr. Billy Harlan is from MY neck of the woods up there in Western Kentucky. I tell you what It’s truly fun to see so many wonderful faces from the Boogie crowd here tonight, and many great bands to be had tomorrow as well, I may treat myself to a few vinyls for my record collection as well. But, you know one thing I dislike wholeheartedly about the new ownership of the Palace are the food choices, and rules….until I delved into WHY they exist. You know as a journalist it bears a HUGE result if you say negative things about businesses before checking out both sides of your dilemma.

I LOVE to snack on cheese sticks, and that’s NOT ON the back room menu. SAME PLACE but different menus, I sometimes avoid eating at venues for choices I like better however the food is still REALLY good…I’m not usually very hard on places because I’m an EXTREMELY picky eater, probably worse than anyone you ever met, and I suggest the pulled pork nachos. The staff here ALWAYS goes out of their way to make my food ANY way I ask, and I am beyond grateful.

However Mr. Jason told me the menu is different in both rooms because they don’t want to overrun the kitchen from both directions, and honestly I can understand that now. I could appreciate that fact, and the entire staff ran their butts off ALL weekend to give us the greatest music show ever!

You might remember me featuring Mr. Billy Harlan from previous Nashville Boogie Vintage Weekenders where this man Mr. Billy Harlan has played. He is a local legend around my area, having been a radio disc jokey and prominent Rockabilly musician. He’s from the area of the Everley brothers and Merle Travis, that being the Greenville area.

Right now, he’s opening his show up with “I Wanna Bop” and he is playing “School House Rock”, and another one wrote by Felice and Bordeaux Bryant called “Bye Bye Love” made popular by The Everley Brothers. The backup singers did a beautiful slow rendition of “Dream”. Mr. Billy did say the song “Be Boppin Annie” was shunned by the radio back in his day because it mentioned the word Fanny, to match Annie. What a wonderful show this has been so far WOW.

He played his song called “I Ain’t Elvis”, and brought up Miss Cheryl Deseree and Miss Tracey K Houston for some songs too adding to all the excitement. All the while these events transpired the front bar was blasting with some truly fine music also. My friends Miss Mae Bliss, and Miss Rebecca Jed (whom are the Bucksnort Beauties) were up front watching Miss Celine Lee play her first Nashville Palace show. They took some pictures for me, and helped me out so I could stay back here and work. I’ll touch on that toward the end of this article here, after my Wanda Jackson portion.

Mr. Billy Harlan took us back in time to the days of Rockabilly bop music when record hops were the popular thing on Saturday nights, and a SODA was NOT A coke, it was a SODA! He filled the stage with many tales of old and often stopped to talk about his many memories of the Everley Brothers and everyone that came from my area.

The front bar is booming with people and parties, the back bar is slamming with good music and I’m in hog heaven here with The Cowpokes another truly fine Classic Western band that East Nashville is proud of. BOTH bars are full of people tonight, with the likes of Dale Watson up front along with SO many more. Like I said the Nashville Boogie is rapidly growing in leaps and bounds, and the scene is stronger than ever. Old friends and new friends are made and rekindled here, and I’m so happy to be a part of this.

This band is prominent in their weekly show they have at the American Legion every Tuesday night, that features a LOT of the acts I mentioned in this article. They are doing many great things for my community here in Nashville, but most of all they make sure we have a good time.

They played “Big Big Love” made popular by Mr. Wynn Stewart , followed by the Mel Tillis classic “Heart Over Mind” from 19. Now, one of their originals was a song called “I’m Gonna Dance With You”. I’m writing the rest of this as they get the stage set up for Miss Wanda Jackson, hard to decide if I’m more excited for her Country or her Rockabilly portion of her catalog.

The video I have included in this was their instrumental song before they played “Iv’e Got A New Heartache”. Also included in their set tonight was “All My Friends Are Gonna Be Strangers”. Another really good one that Classic BR5-49 used to play was called “Honky Tonkin”, off of their first album, which I consider a classic.

The Cowpokes displayed an all star well oiled machine as the piano and steel accommodate one another with blazing solos and killer beats. And they do true justice to songs like “Jambalaya On The Bayou” and others like the slow paced “Tennessee Waltz”. They closed their set with “So You Call Me A Playboy”, and a few others that made up for a hell of a killer set!

Tonight’s headliner set is none other than Country and Rockabilly Legend Miss Wanda Jackson. Tonight was her birthday and she is playing one hell of a KILLER SET tonight right now, Goodness. She pulled out some mighty fine songs from her past 60 year career to put on a memorable show for us.

She began her set with the hit song “Riot In Cell Block #9”, after they led her out to play. She looked absolutely comfortable up there on stage, and time has not faltered her style in any fashion. Her wit and her stage presence both continue to shine on stage. She still loves to entertain people, and tell stories of times past, much like those others of her ilk she represents a period of Country Music history unknown to many. I think she’s one of the more underappreciated Country Music Legends for sure.

“Rock Your Baby” was next, as she went into some of her more Rockabilly era songs from the early to mid 1960’s. Unfortunately due to some technical errors I didn’t get a usable video of Miss Wanda, I apologize for that folks because it truly was an iconic set. “I Gotta Know” from the 1960 album Rockin With Wanda, was next followed by one of favorites from being a young man called “Funnel Of Love”.

The “Big Iron Skillet” was another one my mom used to listen to years ago from the album Wanda Jackson Country! in 1970 which also included the songs “Mean Mean Man” and another called “There’s A Party Going On”. It was the album that she released her cover of Miss Tammy Wynette’s 1967 debut ‘Your Good Girl’s Gonna Go Bad”.  She STILL displayed a wonderful yodel on the song “Bet’ Cha My Heart”….yodeling at 80? YES.

I believe she was the original singer of the song “Fujiyama Mama” that gets covered on many rockabilly sets of many female artists. After she played “I’m No Good’ and another called “Shak’n All Over” we had the pleasure of hearing the classic song “Mean Mean Man”.

She began to close her set with “I Saw The Light” and “Whole Lotta Shak’n” was the encore as they led her out. This truly was an amazing first night to this two day event. I’ll be here all weekend reporting live on this event. I wanted to touch a little more on some of what was going on up front while I stayed in the back and worked the parlor room.

Dale Watson helped make that show an even more memorable one, as Miss Celine played her very first Nashville Palace show. Her band consisted of many powerhouse members including Mr. Chris Casello on lead guitar and steel guitar, AND he plays them simultaneously, and that’s always fun to watch.

Miss Sylvia Neal was playing the bass last night, and Mr. Mike Bernal was playing drums, which even though I was back here most of the entire evening I heard some of the music from the hallway. I’m going to post some of the pictures that Miss Mae took for me last night.