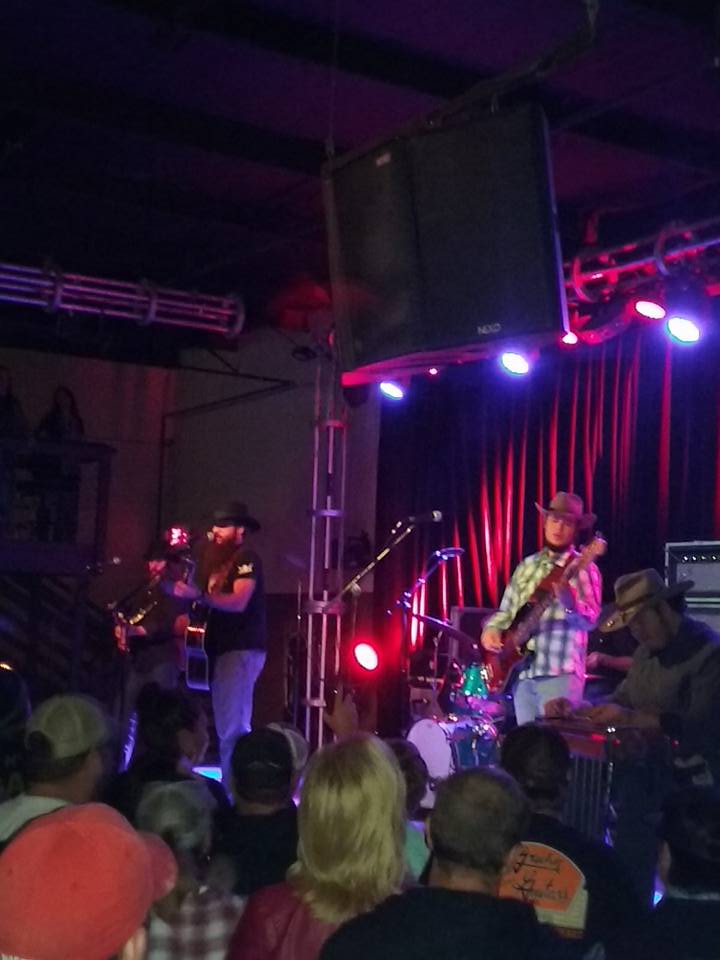 Well folks I’m here at 3rd And Lindsley waiting at my table for Cody Jinks and got to toss Mr.Austin some deer jerky. He sold out three consecutive nights here at this venue and has been selling out venues all over the United States lately, he has skyrocketed into bigger pastures. I don’t think it will be long until he begins to play venues like the Ryman and tours with more national bands than he already is currently doing.

His new album I’m Not The Devil has already been well received by websites like mine and in fact just like I revealed that Billy Don’t Burns earned my number one spot Cody’s new album is number three, and in fact the album contains one of Billy’s songs The Church On Gaylor Creek.

The first band up tonight as the opening act is called Tennessee Jet who is a one man band that is pretty energetic and I thought he was a really good start for waiting such a long time for the music, we got here really early. He opened his set with “Dont Need The Drugs” and another acoustic song called “That’s How I Remember You.”

Then he strapped on his electric guitar and began kicking ass out of the crowd early with A very high energy rendition of Dwight Yoakam’s Guitars Cadillacs And Hillbilly Music. “Soul” was next followed by more loudness and energy with some really cool old radio intro that reminded me of Rob Zombie albums before he went into a cover of Waylon Jennings “Long Time Gone” and a doom infused metal-country song called “Dead Belles And Bones”.

He then put back on his acoustic guitar for a bit to play one called “What Kind Of Man” and that closed his set before the next act. I dissected a lot of Hank 3 influence in his format and sound and I haven’t saw this venue this packed since I watched Hank 3 play this venue tonight.

Ward Davis is one I have never covered on this website yet, I just haven’t gotten to him yet but he opened his set with “More Goodbye” and followed it by “Ain’t No Going Home”. I now see why Cody Jinks chose him to tour with him his set was really gritty hardcore honky tonk Country.

“Somewhere Lonely” Lonely was a very well written song that he performed in his set this evening. He has a really good sound and a truly good stage presence up there tonight I was truly entertained by him. He played Somewhere Lonely and “Get To Work Whiskey”, and right now he is playing “15 years In A 10 Year Town” which sounds really good live and was the title track to his album.

He covered a great job of doing the “Highwaymen” and followed that up with a song called “Geronimo” that he said he wrote in a matter of minutes. The next one he played was called “I Bet Your Momma Looked Good Too”. The next song was cut by Trace Adkins and it was called “So What If I Do”. Ward Davis has many great song cut credits to his resume and he did indeed sing “Unfair Weather Friend” that was recorded by Willie Nelson and Merle Haggard on their Django And Jimmie album, I think for an honest fact that these are the people that are going to fill their shoes. This sold out crowd is going crazy to “Don’t Forget To Get Stoned”.

He closed his set with “Old Wore Out Cowboys” which had Willie Nelson and Jamey Johnson on the album, WOW this has been an iconic show so far as right now he is playing “Ruby Don’t Take Your Guns To Town” and “Big River”. So now we are waiting on Cody Jinks To raise the roof off of this place!

Yeah I been waiting on this show for a month now and of course this is one of my favorite venues to come to even though I haven’t been here in quite some time. One can not attend a show like this and not be convinced that true Country Music is indeed coming back.

As he came out and greeted the audience he went right into “What Else Is New”, and followed right up into “Momma Song”. I notice many things with his growth both on and off the stage her has really drawn quite a dedicated following the likes of Hank 3 and Whitey Morgan.

“She’s All Mine” is a song off the new album I pretty much figured he would probably play the entire album tonight and with no arguments from this website, trust me. I guess he has been “Ready For The Times To Get Better” which was also Crystal Gayle. He played “No Words” and “David”.

“Fast Hand” was the only song he played off the Black Sheep EP, the last time I went to see him play in Bowling Green he played two songs off that album. He also played “Dirt” which is a really good song that they play live. Right now they are playing the opening track to the new record called “The Same”, after that he brought Ward Davis up to play their co write of “I’m Not The Devil”. He followed that up with a really well written song called “Chase That Song” which is also off the new album.

The second portion of tonight’s set was absolutely amazing in every way, starting with “We Get By” and barreling into a rendition of Merle Haggard’s “The Way I Am”  which was a single from Merle’s 1980 album that revamped his career in that time period.  It was followed by “Somewhere In The Middle” and “No Guarantees”  along with a song called “Vampires”.

The last four songs truly riled up a house full of drunken dancing people that were hanging off the upper railings and piling up empty bottles in heaps as he went into what is MY favorite song he does called “Cast No Stones” where the crowd sang loud and proud upon which Mr. Cody himself said “I played that song in more empty bars then full ones”  so needless to say that Mr. Cody was feeling quite good tonight.

“Loud And Heavy” was the last song on the regular show set list before the encores of “Rock And Roll” which also included crowd participation and he has always ended every set I have ever saw him play with “Hippies And Cowboys”. I got to meet with him after the show as he always does and we got to talk a little bit, and let me tell you the Tone Deaf Hippies are a VERY hard working band. His crew works VERY HARD to bring us a hell of a show, and I also want to THANK my friends Miss Tanya Williams and Mr. Jamie McGill and his wife Miss Anna for helping me with some things last night I also got caught up with a TON of festivals and other groups I’ll bring you news on at later times.

You WILL be hearing bigger and better things from Cody Jinks And The Tone Deaf Hippies in the near future I can assure you that.