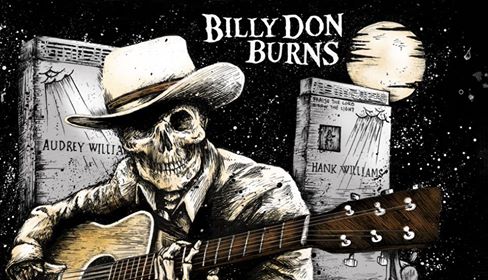 The LONG AWAITED new studio album “Graveyard In Montgomery” from Country Music Legend Billy Don Burns is now available for Pre-Order from the Rusty Knuckles record label and puts you in the drawing to win original artwork. This only lasts until the release of the album on December 16th . And you can order it by clicking on the purple Rusty Knuckles name there.

Later on this month during my TOP 50 I’m going to discuss the Billy Don Burns LP “A Night In Room 8” which was released on white LP from Black Country Rock and you can read more about that Record Store Day release HERE. Mr. Billy had a rough start for this year and in my opinion is getting through it with flying colors and a little help from his crew.

HE IS an icon and a Legendary producer, songwriter and singer. He’s done it all played all the venues you can name and has been supported by everyone from Lynn Owsley to Connie Smith and Jack Greene. He’s been involved in my website MANY times in Kansas City, Nashville, Kentucky and several other states in the past.

Rusty Knuckles CEO Mr. Ralph Miller told Gary Hayes Country last night “Billy Don and I had talked on it, but with such a huge lead time (4 to 6 months in production time for vinyl) we opted to hold off to just get the album out. But it still might get done in the future, same for old album.”

To book Billy Don Burns please contact Miss Kathy Jennings at Out Of The Box Entertainment and please support Billy Don by purchasing the new Cody Jinks album “I’m Not The Devil”.