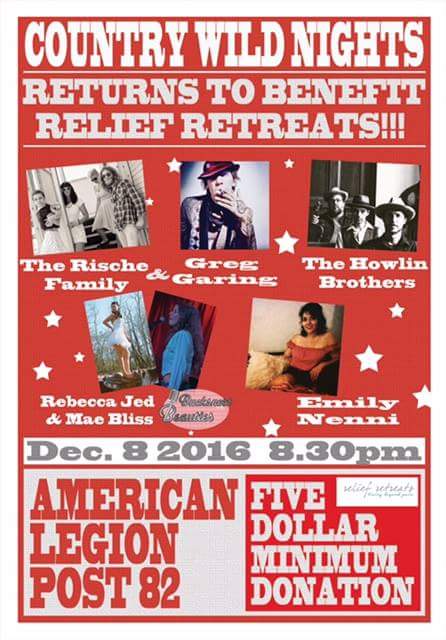 This Thursday at American Legion Post 82 which hosts Honky Tonk Tuesday Nights which I’ll touch on in a separate article I was told about a VERY good Country Music show that will benefit chronic pain sufferers called relief retreats.

The Bucksnort Beauties will be included with a few local acts for this East Nashville show. Greg Garing is pretty much a local Country Music Legend in downtown Nashville and he performed a stellar job for the Midnite Jamboree as he played Ernest Tubb.

Mr. Greg has been covered on my website before as part of a few festivals like Muddy Roots in Cookeville Tennessee and the Nashville Boogie in the past. I often try to visit downtown Nashville to see him perform with Memiss Jones and many others at Layla’s.

The Howlin Brothers have also has several features on my website from festivals and I have often attended their local shows. All of their albums are highly recommended additions to your collection either on CD or LP.

Frank Rische and the Rische Family has never been featured on my website but Mr. Frank recently did some guitar work on Miranda Lambert’s album, and they come highly acclaimed by other music media outlets.

Also Miss Emily Neeni often performs with Chris Scruggs and others around Nashville as well, so you will pretty much be treated to a wonderful show of local Traditonal Country Music on a weeknight that I highly suggest if you can make it…you should!