Colter Wall In Florida, The Last Show With The Speedy Creek Band. 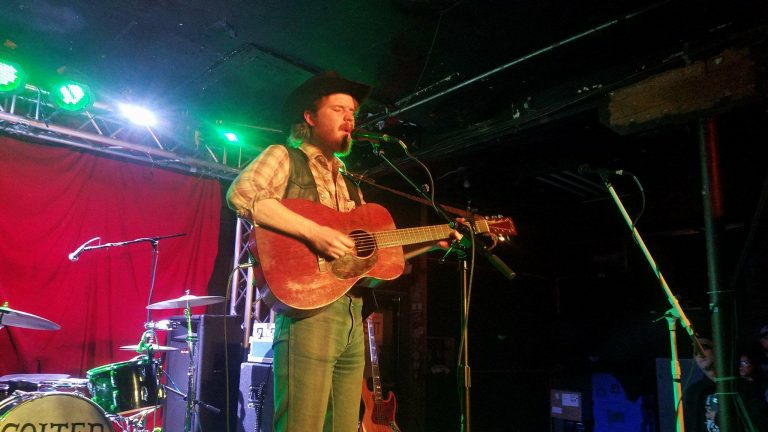 From The Desk Of Mr. Joshua Wallace.
I saw Colter Wall for the second time this year on Saturday November 18th, 2017 in Jacksonville, FL. This was Colter’s first run into Florida so I knew I had to be there. I didn’t know it would also be his last show with The Speedy Creek Band until later on. This show was special, and you could tell that. I also have a feeling this show will be the last time I had a chance to see Colter in a small room.

The show took place at Jack Rabbits in Jacksonville, FL which is by definition a hole in the wall. The front
is very non-descriptive with the only markings being the name painted on the door in black spray paint. The capacity is only around 300 people. It is a hole in the wall, but in a good way.Ian Noe opened up the evening with a set of original songs. He reminds me of a young Bob Dylan and I’m not alone in that sentiment as someone drunkenly shouted that out to Colter, as he acknowledged Ian during his own set.

Ian Noe impressed me with his down to earth and real songwriting and storytelling abilities. Songs like “Meth Head”, “Junk Town” and “Drifting Down The Lonesome Line” really pull the audience in and it silenced the rowdy crowd who were getting ready for Colter, not knowing they were about to be blown away by the opening act.Tonight’s show was different from the last time I saw Colter. Last time he opened up with “Thirteen Silver Dollars” and had the band come up in the middle of the song. That still happened, but we also got an extended acoustic section before that. He did some covers including a “The Wabash Cannonball”, and Roger Miller’s “Oo De Lally” from Robin Hood. I loved getting to see Colter by himself for a bit before the band came up as it feels like a more intimate setting.

There were also some changes to different songs in the setlist. He does a bit of “Redheaded Stranger” at the end of “Me and Big Dave”. I always thought that song reminded me of Willie’s “Me and Paul”. He played just about everything you would want to hear from the record he released this year, and a few from Imaginary Appalachia.

There were even a few newer songs including songs like his big rig song “Thinkin’ On A Woman” and some
other things that were newer. I love that Colter is an artist who tries out songs as he writes them on the road. You get a feel for his process and by the time they’re on an album they’re already known by his fans.

Colter Wall seems to get better every time you see him. It will be interesting with him going forward without The Speedy Creek Band, but I know it will be good. There are a few stops left on the Warpin’ Our Minds
tour before it is all done. Up next is a run in Europe. After that, who knows? Only time will tell.