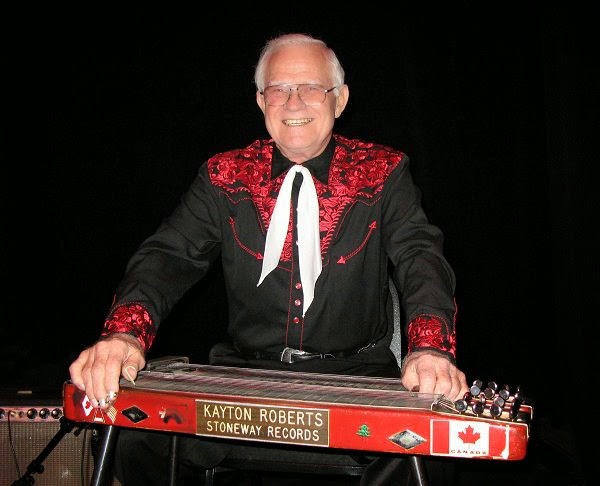 Tonight as I was working on some other projects for festivals and my weekly show updates, I was texted that around 11PM Central Time Steel Guitar Legend Kayton Roberts passed away, as a result of a stroke.  You’ll find Kayton Roberts on so many albums by bands that one person cannot completely stop studying the long list of music he left behind.

If you look up the words Console Steel Guitar on the computer you’ll find this:

One of my favorite recordings of Mr. Kayton was the Riders In The Sky album “Weeds And Water” from 1983, additionally he went on to perform with my friend Rob McNurlin who recorded a Gospel album with Johnny Cash’s Martin guitar, you can read about that HERE.

Mr. Rob was one of the many people that proceeded to proliferate this man and his iconic red steel guitar with the Canadian Flag moniker upon it, and I hold Rob McNurlin in extremely high regard as a musician, as a fellow Christian, and more importantly a friend.  Never did I recall Mr. Kayton ever using pedals of any kind, nor do I recall anything but his favorite Fender Amplifier accompanying him on any stage.

His latest trip to the studio was with Marty Stuart, playing steel on the title track of his Ghost Train CD.

From what I have all studied about Mr. Kayton the first playing job he had, out on his own was around Gainesville, Florida.That was with a fellow named Toby Dowdy, and radio was big back in those days, back in 1951…that also was the year he bought his first upright guitar. He worked out of a radio station called WRUF and television was just getting started back in those days. He was with Toby and there a TV show over in Jacksonville, FL called “The McDuff Hayride.”

As I stated above he played rhythm guitar for the Rainbow Ranch Boys for the first year before taking over the Steel Guitar duties for his hero “Big” Joe Talbert who was the influential sound for much of Hank Snow’s early career. However as the years went on Hank Snow began using studio players that weren’t up to the same standards as Talbert was, and it discouraged Kayton.

That was until the great Chubby Wise met him inside of a barber shop and befriended Kayton. Now at that time Hank Snow had a pedal steel player by the name of Jimmy Crawford, who played for that first year that Kayton was a Rainbow Ranch Boy. Jimmy Crawford got a job with Faron Young and announced he was leaving, which left the steel guitar spot void. After showing Hank Snow that he could easily mimic Joe Talbert, Kayton took over the Steel Guitar duties.

Above in that video he is seated on the commode playing steel guitar in an iconic Aaron Tippin video, which was for his first album that Kayton played on called “You’ve Got To Stand For Something”. Two of my favorite albums Shelton Hank Williams 3 has released featured Kayton Roberts on steel guitar in the studio on them.

You know as I continue to study him further I found out that Little Roy Wiggins was NOT the originator of the “ting a ling” sound made popular by George Morgan in the beginning but in fact it was Billy Robinson.  I discovered that because Kayton originally wanted to play for George Morgan, who died in 1975.

This little portion here is from an interview I found when asked what his sound was made of:

Well, my main tuning is C6th, that’s my bread and butter neck. It has a little variation. Staring with the first string on the small end: E, C, A, G, E, C#, A, A (an octave lower). You will notice that I have two A’s together…the second is real low for that boom effect. It’s almost like a big third more than anything else. I use it only occasionally when I’m doing some thump style. Getting back to that C#, normally if you’re playing this C6th tuning and you rake across it, it will sound out of tune. But, if you rake across the strings and leave the second string out, then you’ve got a whole new tuning…and you see that second string there, the C, if you pull that a half step, it will fall right in tune with that tuning. You can really play some jazzy sounding stuff with it. It makes a whole new ball game. It’s like having a dual tuning. And on the other neck I’ve got a special tuning…it’s for rides and special things. The first string is F, D, A, F, G, Eb, C, F, but I couldn’t remember these if I didn’t right them down. I keep a list at home in case someone calls and wants to know. Don’t mind sharing these cause I don’t have any secrets. Of course, Hank doesn’t like notes played on the high register, so I’m usually limited to playing on the lower end.