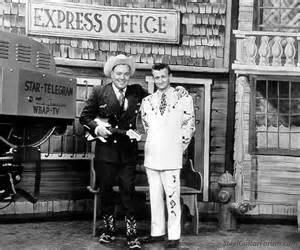 Freddy Powers was a songwriting Legend that I never got to meet, however some years ago I did get to speak to him on the phone briefly. He and his wife Catherine were at the Fontanel Mansion in Nashville and I missed them that morning to get to meet them. However he has always been and will be one of my favorite songwriters Country Music ever was blessed with, and he gave Country Music many gifts.

He wrote my favorite song “Nothing At All” for Teddy and Doyle Wilburn and it appears one two of their albums. He also recorded one of my favorite Bobby Keel songs “Daddy’s Honky Tonk” along with so many others that anybody would probably forget, there’s just so many spanning decades of music. He was the first artist to ever record a Willie Nelson song as he recorded “Heartaches Of A Fool”

He first developed a long lasting friendship with Willie Nelson and was invited to produce and play on his 1981 classic album “Somewhere Over The Rainbow” which includes a signature jazz instrumental that he and Freddy Powers shared fondly. It was a tribute to Django Rhinehardt who influenced both Willie and Merle Haggard both of whom Freddy Powers contributed to as he also wrote “I Always Get Lucky With You” “A Place To Fall Apart” “Natural High” and went on to wrote most of the songs for Merle Haggard’s album “It’s All In The Game”.

In addition to that he played rhythm guitar for Merle Haggards band The Strangers for twenty plus years and they lived next to each other on houseboats. During that time songs like “Let’s Chase Each Other Across The Room Tonight” were penned, and he holds the CMA’s “Triple Play” award for writing three number one hits within a year.

He developed Parkinson’s disease and throughout his constant battle with the affliction he always emerged a champion humanitarian and well loved friend of Country Music. He developed the Freddy Powers Parkinson’s Organization to help fund and research a cure for the condition. He also arranged many shows in Texas to benefit research for it.

Tonight around the suppertime hours I was contacted and told Freddy Powers passed away today June 21st at his home with family.