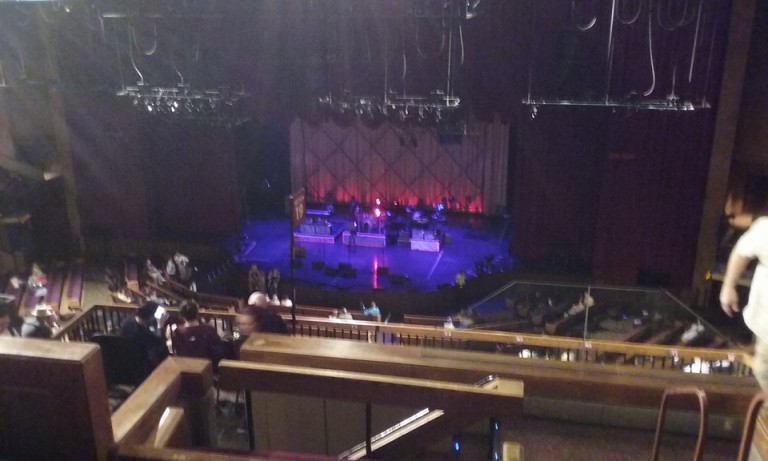 You know I don’t know if this is a bad thing or good thing but I bet not many (if any) media outlets report on this show. Honestly I think it’s sad because I’m TELLING YOU that THIS was a special show of GRAND elements in every way, and it did my heart good to hear those words from the OPRY stage….Muddy Roots Presents.

I am tied in with many festivals and many different companies and groups (if you will) but Mr. Jason and his vision and the way he does things has always been my personal favorite. It may not be yours or you may not agree, but you aren’t writing this, I am and he has done some very nice things for me as a friend. It’s nice to know others out in this nasty world have your back in times you truly need it.

OK SO one thing I’d like to stress early on I had a balcony seat and even though Chris Isaak DID come up into my section and sing…oh yes he wandered all over the stands and performed I did not get very good pictures of the show. For that I am truly sorry however I DID get one hell of a report put together for you on this show..ready?

Woody Pines opened the show and every time I see them I enjoy them more and more. I skipped their late performance during the festival to come home and work so I could ready the other articles before this show I KNEW it was going to be awesome.

The show opened with “Long Gone” and then the band went into a really awesome jazz tune called “Dinah”. “Satisfied” was a cool song off the album “Counting Alligators” that is my favorite album they have. You know Muddy Roots Records bought control over all the titles and reissued them so NOW you can buy them at the merchandise booth during their shows.

“Anything For Love” was next off the new album and then he went into an intro story about a song off his fourth album called “Hobo And His Bride”. Now I’m going to try my best to remember the whole story, if you ever drive in Kansas and drive and drive you will see trains. The band was traveling alongside a train with a hobo waving to them on it and they fell behind the train. Several hours later they came up on it again and saw that indeed there was TWO hobos in a boxcar and she had a wedding dress on.

Woody Pines has several train songs out there that are really good and I enjoy his viper jazz swing music. He closed the show with “One Black Rat” off the new album, self titled. I highly suggest you check out their albums especially “Rabbit’s Motel” and the new album.

Chris Isaak is honestly an artist that appeals more to women than men in a nutshell, however being more mainstream of an artist I do enjoy some of his music. BUT his live show blew me away, it was amazing! Some of the best crowd interaction I have ever saw in music and some of the best stage presence I have ever witnessed, not many could pull off such a terrific show at the Opry House without it being an actual Opry show.

The floor got quiet and the lights went up and he blazed into the song “Dancing” which I felt was a good intro but not upbeat enough for an intro however it was good. One of my favorite songs he does was next “Somebody’s Crying” was a good song he did a really good job on it, with that smooth voice he has, but I’m telling you he CAN hit high notes…wow and he can carry a solid tune. He absolutely commands center stage and shows it who’s boss.

He did a really awesome acoustic song called “Two Hearts” you know what he reminds me of John Denver in his own different way, very powerful balladeer and showman. Songs are very positive and full of love lyrics and I guess that’s why earlier I said he was more directed towards women…just my opinion.

He is one of the few entertainers that still wears rhinestone suits and very cool showy costumes, he said it takes us as the patrons to support live music or he would wander around town and kids would say look mom there’s a figure skater. One of the ladies in the crowd approached the stage and gave him a tie clip and he put it on, like I said VERY GOOD crowd participation to this set tonight. Beyond what I anticipated as a paying customer.

“Don’t Leave Me On My Own” is just a wonderful song both vocally and well written. I’m so glad he played this one cause I listen to it a lot, I love his vocal range on it. And it really made the crowd feel good people were going nuts, then he went into the slow song “Kiss Me Like A Stranger” which is one his newer songs as well as “Reverie” which he played later on in the show.

Chris Isaak does many good covers and has recorded many of them that he included in tonight’s set. “Oh Pretty Woman” was one of them and I’m sorry for skipping around in my notes but he played “Great Balls Of Fire” with a piano that actually bellowed a ton of smoke out into the audience. His band was stellar in their own right and he showcased them each for us tonight and acknowledged their contributions to his own talent, which made me respect him all the more. Tonight I came away with a new respect for him as a performer…he truly gave me satisfaction of value for my ticket price. At one point within the show he wandered around the entire audience and performed some songs in the aisles and took pictures with people. He took a gal’s phone and took a selfie of them and gave it back to her, needless to say she went nuts.

“Down In Flames” and San Fransisco Days” were next and those were songs that I wasn’t familiar with he has so many albums under his belt as of late. Another acoustic song he did really well was “Forever Blue” I tell you what this man just naturally loves to entertain. He was so at home and inside his comfort zone behind the mic with us, for one evening we were his family and his heartbeat. He made me feel very important as a fan, and that’s a rare quality for a performer of what I consider mainstream status. I get that from local bands because they appreciate the fans more than most mainstream performers.

“First Comes The Night” and as I talked about before “Revelry” were next along with another cover “I Cant Help Falling In Love With You”. “She’s Not You” was another good song he did tonight that was one of my favorites, it’s one of my guilty pleasures…ok..so it’s not a typical song you’d think I mention I like.

He played “Blue Hotel” and they all did a really wonderful instrumental as he introduced the band to us. He played his own version of “Ring Of Fire” and a heartfelt tribute to Merle Haggard with “Lonesome Fugitive” and closed his set with “The Way Things Really Are”. I guess all in all I cannot say anything more than I have already said about this show, or this festival. It just keeps getting bigger and better every year now honestly to me..in my opinion..nothing will EVER BEAT that field in Cookeville where it all began for me and for many others. So until I see YOU in the Cookeville fields for the main Muddy Roots..goodbye folks until the next festival.