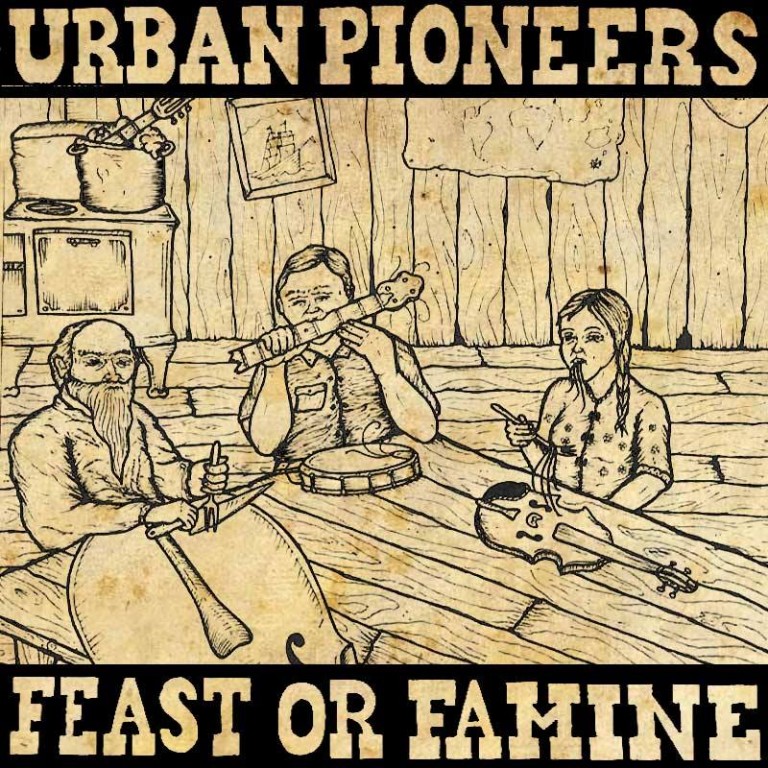 Alright folks I usually take several albums and feature them altogether in multiple article fashion for a lot of bands and artists but the Urban Pioneers hold a VERY special place in my heart both as friends and musically speaking. Liz Sloan speaks to the masses through her fiddle nightly and the three of them are true road warriors playing a whopping 300 plus shows yearly. I believe this is Mr. Martin Seargent’s frist album with them AKA Scooter, so please when YOU go see them welcome him into the fold.

I believe the next time I’ll get to catch up with them will be in Kansas City at the end of the month however I am hosting a different stage and won’t get to cover their set. I’m quite sure one of the many festivals I cover in the future will have them on the roster..I plan to catch Moonrunners in Chicago so we shall see how that pans out.

Feast Or Famine is their third album and has just been released digitally right now and will be available SOON and as soon as it is I will place the link up here so you can buy the album. One of the songs on the album that I have heard them play before was “He didnt Know My Name Back Then”. This album is packed full of their usual instrumental fury along with Russian fiddle influences and more, they have such a wide variety of features in their material. Here are some tour dates for you..

“Never Had A Waffle At The Waffle House” was absolutely hilarious especially coming from these two who obviously playing as many shows as they do are Waffle House ROYALTY. But since it’s called Feast Or Famine I guess this covers both since it mentions every other item off the menu there. Ha.

“Behind The Wheel Again” is the classic Urban Pioneers sound I was expecting from them and it’s just an all out toe tapping jam, with great vocals. It will fit in really well with their current list of possible songs at shows, and it features great strumming and Liz sawing out her signature sound but I tell you what during “Maybelle’s Farewell” she goes absolutely crazy on the fiddle with a Russian type influenced instrumental.

“Lazy Bones” is a truly good slow song about..well…a lazy man who goes fishing and is so lazy he don’t want fish to bite his line. I just really like the the lyrics to this song. If you are into traditional type string band music this band will quickly become one of your top notch bands for sure.

“Mary The Elephant” is a dancing elephant in 1916 and along with a hobo who was mean to her and she got angry and trampled the mean hobo. They tried to kill the elephant by shooting her and electrocuting her but she wouldn’t die so they hung her on a big chain at a construction site.

So this new album has thirteen tracks on it and if the email which includes the tracks is numbered as per the album here are the songs, and I understand it will soon available on vinyl as well.
1. Maybelle’s Farewell
2.Sunrise After Sunset
3.He Didn’t Know My Name Back Then
4.High On A Mountain
5.Fly Around Pretty Little Miss
6.Behind The Wheel Again
7.Golliath Coming Down
8.Lazy Bones
9.John Browns Dream
10.Never Had A Waffle At The Waffle House
11.Mary The Elephant
12.Do You Dream In Color
13.No Blood In The Stone.