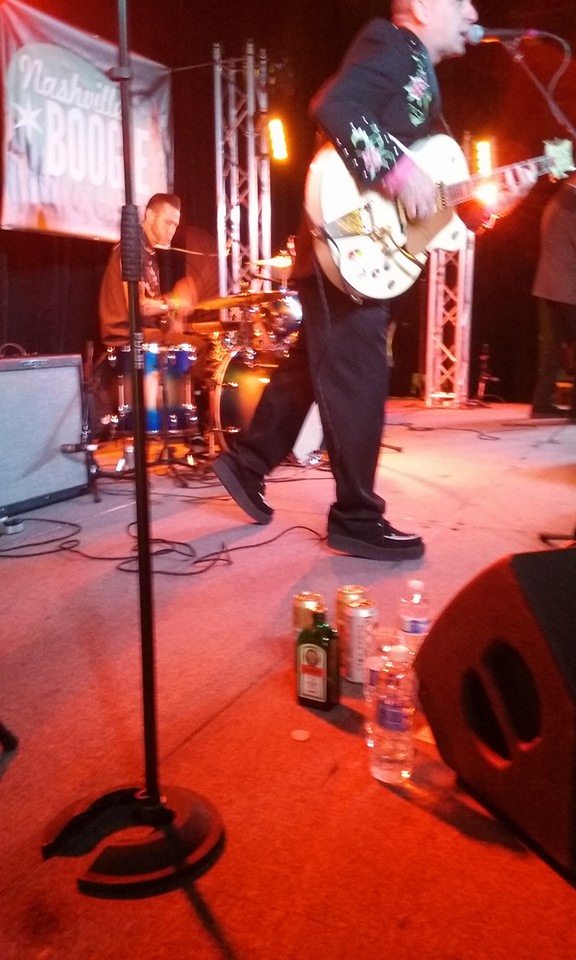 Folks tonight I’m writing this one with my notes and I want to talk about Unknown Hinson THE KANG, The Hillbilly KANG. I have never had the opportunity to cover his set ever in my almost three years of covering shows on here. It just always missed my schedule or something always happened and I’ll be honest I missed the first three songs BUT THANKS to Unknown and his crew I managed to fix that problem so let’s delve into what the undead hillbilly KANG brought to the Nashville Boogie.

He stands over the mic and growls incessantly at all them womern out there as he plays his set and them womern go WILD over his undead spells. See them vampires can cast hootchie cootchie spells on your wife or girlfriend and he WILL steal her away from you, you must watch your  womern around him.  He opened his set with “Silver Platter” and of course “Undead Blues” man I’m really bummed I missed that one!

“I Aint Afraid Of Your Husband” is what I mean…he’s not. He’ll just bite you and you will submit your womern to him. When I got there he was playing “Rock And Roll Is Straight From Hell”  and went into “Fishcamp Women”, along with a bunch of truly awesome guitar solos. He hasn’t released new material in some time and even quit music for a brief period however he returned shortly after and went on tour with Reverend Horton Heat, whom I shall touch on next. If you’ll remember a little while back their tour van caught fire on the road and I’m really glad nobody was hurt, or killed…accept Unknown Hinson already IS dead so you know..I’m just glad everyone was safe.

“I Make Faces When I Make Love” was next and yes that raised eyebrow is what casts them hootchie cootchie spells on your womerns and “You Ain’t Calling The Law” on him at any time. One of the coolest songs he plays is “Polly Urethane” and my favorite song he does is “Human Oddity” off his “Reloaded” album, which is the newest one I know of.

He also played “Barbie-Q” and “Ugly Things” and another song off Reloaded “Spittin On My Grave”. You know when I went to visit the V Club in Huntington WV with ol’ W.B.Walker I saw the great artwork of him in the smoking area on the wall along with Hank 3 which reminded me of the song “Out On My Patio”. He also played “Venus Bound” and closed his set with “Torture Town” and also “Hippie Girl”, and afterwards he signed stuff and took pictures with us all.

So the next band I caught a little bit of before I had to move on was a band Unknown Hinson was on tour with and the bus on fire accident was NOT made up, it really happened and seriously I’m SO GLAD everyone was unscathed. The Reverend Horton Heat played directly after Unknown and tore right into “The School Of Rock And Roll” and another one I’m not sure what it was perhaps “Beer Holder”…I was packing up to head over to the Events Center to see my next full band set!

Big Sandy And The Fly Rite Boys are a band from the west coast that I have got to cover many times and every time they do I try my best to get to cover their set. I know it’s not easy for this band to get this way as often as they want to, and every time I see them it is better than I expect.

I missed his opening song while talking with some people from Michigan, but his second song was off his very first album and it was “Miss Tracey”. Folks Big Sandy has been around for many many years, in fact he is celebrating twenty five years on stage.

He debuted some NEW songs for us he had for sale on record “Fine Fine Superfine” was the first single and the B Side was called “Every Time”. Both songs were truly exciting and I’m hoping they come back soon for another full set. If you’ll remember correctly a few months ago I covered Big Sandy and Hillbilly Casino (A band I sadly missed this weekend) as he filled in for Miss Wanda Jackson who was recovering from surgery.

“Love That Man” was next followed by a REALLY nice “Hot Water” I love that song so much, he played “Feeling Lucky” and closed his set with in my opinion is an iconic song he MUST have in his set list “Chalk It Up To The Blues”. Last year’s Nashville Boogie was my first time ever having covered this man’s music but I grew up with Jumping From Six To Six for sure!

Deke Dickerson is just a few years shy of my own age and has accomplished more than folks twice our age. He writes a regular column in Guitar Player magazine and hosts his own festival yearly. He is a guitar wizard and absolutely blew the roof off the event center tonight…wow.

This man is one of the double neck kings and he does a lot of guitar picking with O’l Flying Fingers Larry Collins and later on in his set he played a song called “Rocking Jam” from Larry Collins and Joe Maphis. He opened with “Let’s Rock Tonight” and went into the high paced song “Blistered”.

He absolutely tore apart the stage tonight and played “Big Guitar” and he plays it GOOD, in fact he had a double neck that two guys played at once! Have I ever saw that..yes I have. But not in this good of fashion, and as he steamrolled into “Double Neck Boogie” is when they did just that. They went absolutely crazy and had the crowd going bonkers, “I Might Not Come Home At All” was another good song.

He does NOT STOP when up there are was screaming out the lyrics to “Psycho Therapy” and even went into some heavy metal licks for us while playing a guitar solo called “Whistle Dick”. I’m telling you he left my jaw on the floor as he closed his set with a song called “Nashville Boogie” He’s one of those west coast acts as well that just doesn’t come to my area that much, in fact I don’t recall ever seeing him playing in town.

Pokey LaFarge is a fellow I have covered before at Muddy Roots main festival in Cookeville but it has been years since then. Last year he released a dang fine album of noteworthy mention and tonight he did a wonderful job.

He began with “Close The Door” and another called “Mr. Nobody”. Now mind you this man performs one hell of a set with so many different instruments in his multi-talented band. You could call him Ragtime Country Delta Blues Viper Jazz…just call it good ass music!

“Something In The Water” was next along with “Barcelona” and they were also filled with many different sounds and solos and Pokey has very good crown interaction and introduces his band earlier in the set. “Wanna Be Your Man” was next and that was a very good song, he did one of my favorites called “La La Blues”.

“Acti’n a Fool” was next along with more fun filled music solos of all types, “You Can Never Tell” was exceptionally good tonight I remember him playing that one last time. It was very hard to get pictures of Pokey because the stage area was pretty packed in tight here, this was one of the more packed shows of the weekend.

“Carmelita” and “Bad Girl” were both next and one of my favorites he does “Central Time” was next to last. He closed his set with “Hard Times” and while I was packing up my camp he did do an encore but I don’t remember what it was to write it down. All in All I had a truly blessed weekend of music here last weekend and I have more people than I could EVER mention to thank here for making these articles possible.

BUT ESPECIALLY YOU….YES YOU for taking the time to read all these different articles. I mean the bands and venues can organize and promote all they want but without YOU it just doesn’t happen. YOUR enjoyment of the music and support of it all is what keeps it going afloat. I’m sure EVERY band and EVERY festival would all agree whatever you like it’s YOUR support that continues the possibility to grow. I got ONE article to go folks and it’s from the Opry House on Sunday….Muddy Roots takes over the Opry.