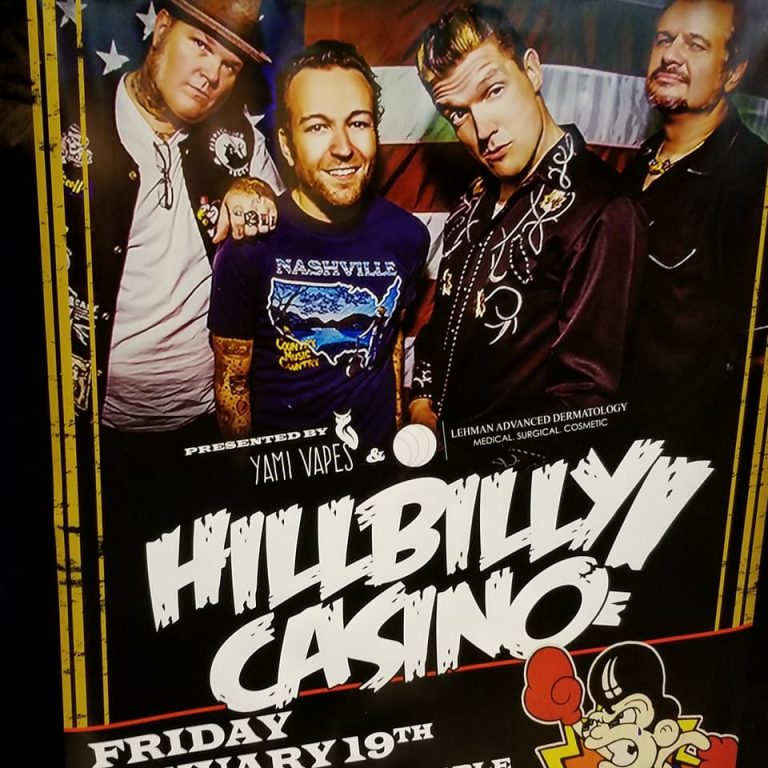 I am here at O Connors Irish Pub in Clarksville Tn where one of my Top 50 Of 2017 bands is tearing up the city. The first two songs I believe were “Living In The U.S.A.”, and “Get Along Big Daddy”. They played a nice cover of Johnny Cash’s “Big River” before going into an original song Mr. Ronnie wrote called “Heartburn And Heartache”…WHO IS IT..why Hillbilly Casino of course!

Some news about the band here upon talking to the Vanilla Gorilla himself Mr. Geoff Firebaugh, was that after tommorrow’s performance in Louisville Ky, they are heading out to California to play during the NAMM Convention. Also, they will be playing a showcase the weekend before the Ameripolitan Awards at the Blues City Cafe.

As I always do, I would like to take a few moments to talk abut the venue, which was very spacious and arranged nicely. I spend a LOT of time in bars for this job, and I am WELL trained to see things most people do not. This place parties hard, and I will warn those that don’t like smoking this place is HEAVY filled with smoke. For me it is a normal thing to encounter, but in the PC world of today’s day and age its apparently not the norm. I’ll be honest I don’t mind it one bit and I think smokers have rights too, but this is just a fair warning for those that disagree.

I’m using a BRAND NEW tablet today as I write this so I will not be including videos because the audio turned out terribly choppy. SEE THIS is how you buy new toys and tinker with them, and find mistakes and settings. I’ll have it up and blazing trails with me SOON. I have MANY videos of Hillbilly Casino on my Youtube page now from previous events.

I liked the size of the tables up front by the stage, as well as the stage itself. The lighting was really good and provided me with enough prime photo opportunities of them all. This venue gets packed up hard core and crowded all night while the DJ played 80s songs for people.  The food was REALLY GOOD, the menu did not contain many options, but that’s o.k. because the appetizers were GREAT and the burgers are really good. Speed of service was above satisfactory, and the staff was very nice. The security did a BANG UP job last night at maintaining order on the bathroom situation and he was VERY cordial in explaining rules to people, telling people NO all night is often a thankless job and he did it in a VERY professional manner in my opinion.  All in All I would gladly return to O C’onnors for another job in the near future.

After Hillbilly Casino played some Chuck Berry, they went into two original songs called “80085” and another called “Dog On A Chain”, the latter of which is on their new album called Red White And Bruised. The song “Cocaine Blues” was next, followed by the ever popular song in their set called “PBR” Their new album continued to adorn their set tonight as the played “Give It All Up To You”….by the wa,y that album is now available on vinyl, so go buy it. Right now they are playing “Low Down” and went into a cover of  “Only Daddy that’ll walk the line”.

The second set began with “No Toll Taken” and went into a high energy song called “Jibber Jabber” from the new album, now Jibber Jabber originally showed up on the Live Album From The Exit Inn.
As the night progressed they pretty much played the entire new album for us. More of the set contained “Shes Got Tricks”, “Toss Turn And Roll, and Trouble”.

“Knockin At your Door” was included in the set as well as “How Do You Think” and as always a very wild version of “the Hole”. Perhaps one of their more energetic song sis the Hole followed by the awesome murder ballad “Violets In May”. They then played my all time favorite song “Big Dan” and “Hot Rod Lincoln”. Folks I look forward to covering Hillbilly Casino many ore times in 2018 at many festivals and more house shows as well. The show closed with a KISS cover and their anthem the “Tennessee stomp”.