Keeping It Country Showcase At The Nashville Palace. 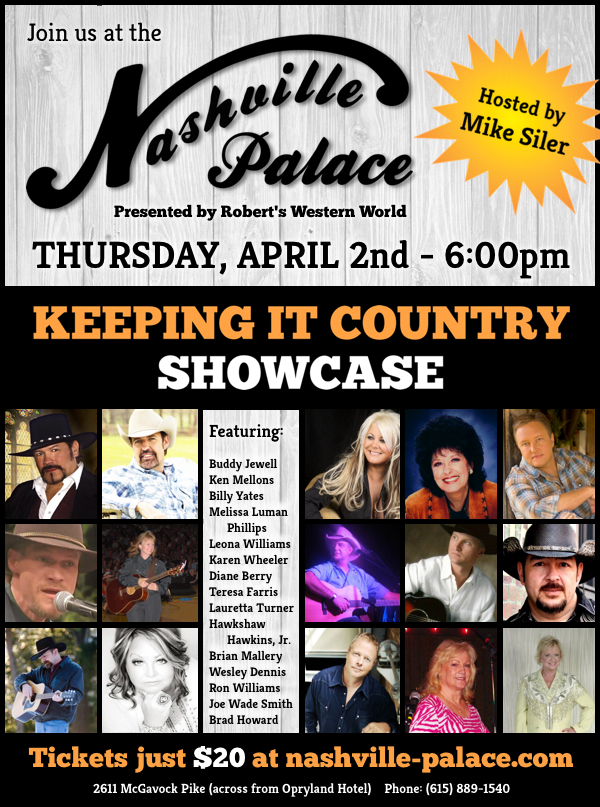 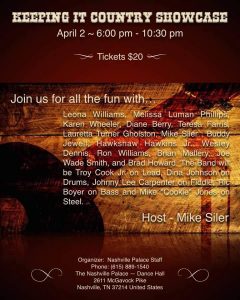 Well folks tonight I am going through some turbulent feelings regarding some other issues transpiring within
the music world but I found another GREAT local show for you to go check out. ONCE AGAIN those fine folks at the world famous Nashville Palace bring you another world class talented show! And if you can come out and see this one you will NOT WANT to miss it folks. 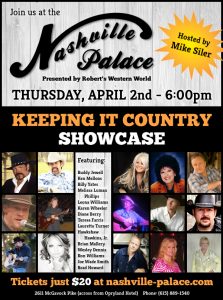 Billy Yates, what can I say about him? What can I NOT say about him that isn’t less than awesome? Let me tell you this story about my time here in Music City. About 16 years ago I first came to town and I used to live over at Harding Place and Nolensville Road. It was a prime location for my plans and I worked at a grocery store over at Cool Springs and as I was working I got to talking with Billy as he was a customer. He was telling me about this song he had and it was being recorded by someone special and he gave me a sample CD. This CD had several songs on it
that were great but it had ONE on it that became a classic for me called “Choices”, it was so powerful I had to pull
over and cry until I threw up.

This song later in 2000 was cut by George Jones and placed on his album “Cold Hard Truth” and in turn would accomplish something Music Row said was impossible…it placed George Jones back on FM radio. A feat no other songwriter can acclaim for it’s release time.

Leona Williams has been wowing me for many years now, her sets are amazing and her list of songwriting credits go on for days. My favorite song she wrote was “I Think It’s Gone Forever” which was featured on the “Pancho and Lefty” album by Willie Nelson and Merle Haggard and in fact was married to Merle in 1978-1983.
She was dubbed in 1978 “San Quentin’s First Lady” and her release of the same name on vinyl is heralded as a
rare find. She continues to tour with her son, Ron.

So Thursday April 2nd go on down and enjoy some really great Country Music in one of the many great areas of Nashville.