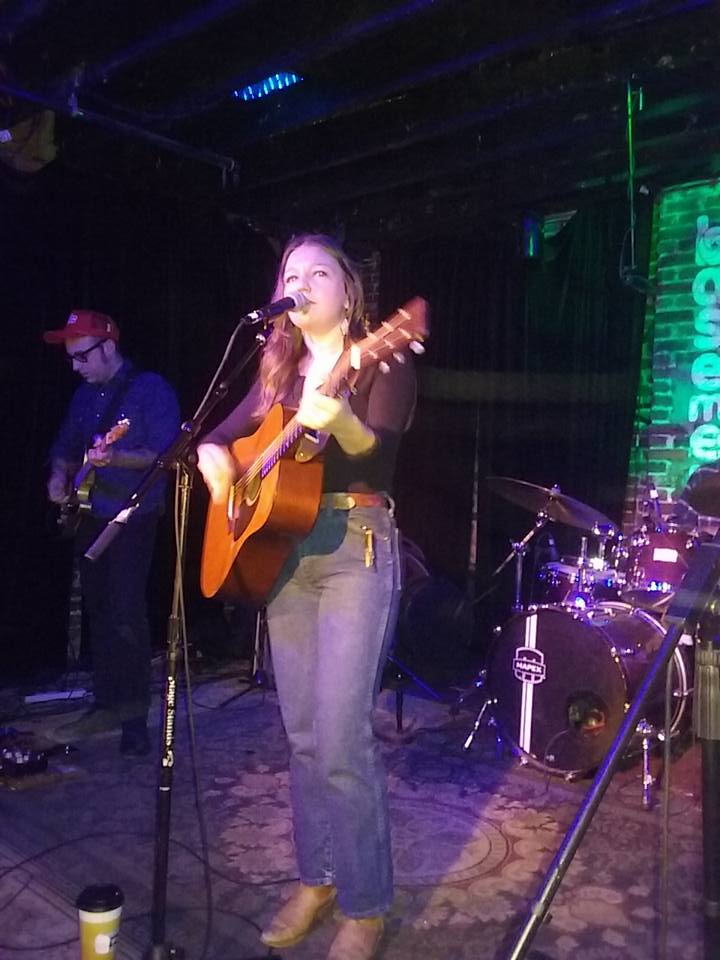 Last Sunday night my friend and I went on down to Nashville to have a little night out of fun, we had a wonderful supper at Jack’s Barbecue over on Trinity Lane for some wonderful vittles. As always It’s one of my go-to places for smoked turkey and trust me It’ll make you salivate and make your stomach happy with delight.  The one on Trinity Lane is my usually my starter before a Titans game or Bridgestone Arena show.

We briefly stopped downtown at Robert’s for a quick beer and saw the Tennessee Walkers play a number or two and I’ll spoil a future article..I got permission from Local Legend Chris Scruggs for an upcoming steel guitarist edition, now in case you missed my first one with Travis Egnor from the Horse Traders you can read that HERE. OK and also folks I will be including Miss Kelsey’s steel player Brett Resnick in a future edition.

So we made our way down to 8th Ave to the The Basement Nashville which is directly below Grimey’s Records not far from Douglass Corner Lounge and Zanies Comedy Club. I tell you WHAT for a Sunday night we had a REALLY GOOD crowd down there, all three of these bands are developing their own following in their own rights. I have covered these first two MANY TIMES in the past in different forms and places, and the first band I’d like to cover and share is the combo of Mr. Joe Macheret and Mr. Scott Risner called Truckstop Waterfall which is basically folk music with mandolin and fiddle and guitar.

Mr. Joe plays with Joe’s Truck Stop and The Tillers and a few others and Mr. Scott plays with Buffalo Wabs And The Price Hill Hustle which is a REALLY good band you MUST go check out if you never have yet. Sadly I was very sick last year during the Crooked Smile Fall Fest and I could not go to Indiana to feature them.

Regardless of their other ventures this duo is quite entertaining to watch play live. They have been currently on a several week tour with Tyler Childers and got to take some time off to do some fishing. In my opinion (and you can put this in your mailbox) Mr. Tyler is the next big thing to come out of the local circuit..the next Cody Jinks if you will. He IS destined for bigger and better venues..not that the Basement lacks ANY prestige, no no no but this young man is headed for places like 3rd and Lindsley and eventually the Ryman just give him a small amount of more time.

Now let’s talk about Truckstop Waterfall’s set, they opened with a song called “Camptown Races” and began to showcase their down home harmonies like “Lonesome Midnight Blues”. Mr. Joe tells Gary Hayes Country that the song “used To Be” was an old Bill Monroe song that he heard as a child. HEY Speaking of Bill Monroe I’ll be releasing an article about the 5 CD set coming out form Rhythm Bomb Records soon, watch for that.

“The Moon Sang” was the next song which was one of Mr. Joe’s  songs form his own catalogue. The next song was called many things in the past “Dig A Hole” or “Darling Corey” or “Dig A Hole In The Meadow”, It’s an old Bluegrass tune and it’s not documented for sure who wrote it, or I haven’t been able to research it to a pinpoint extent yet.

Perhaps the best song in their entire set was the song called “The L And M Don’t Stop Here Anymore” which fit into tonight’s ambiance quite well, you see Mr. Tyler represents a long lost group of people in East Kentucky and West Virginia that have only one means of living (legally)…mining coal.  They rolled on with a song called “Gypsy Moth” and displayed many song filled with talented instrumentals and solos, as Mr. Joe changes from guitar to his fiddle they compliment each other quite well in every way.

“Banjo Pickin Bacco Spittin Gal” was a song Mr. Joe wrote about an supposed ex girlfriend of one of his friends, and after he wrote the song the friend didn’t even remember her any longer. Gotta love them gals with a mouth full of dip from the Country, this song reminded me of the BR5-49 song “Hum Dinger”..which wasn’t their original song I do believe. “Columbus Stockade Blues” was next and that was followed up with a song that was placed in a movie called “Eat My Dust”. Now the song was an instrumental and the movie was Ron Howard’s and it was used during a car chase scene, I think you can Youtube the song and study it to place it in the movie.

I been saying for years now that I agree with W.B.Walker’s Old Soul Radio Show on Tyler Childers he’s an upcoming powerhouse juggernaut.I mean he is developing a heavy following in every city he visits brick by brick and day by day, and tonight was proof of that as this show garnsihed an impressive turnout for a Sunday night in my opinion.

The place was packed and the whole crowd sang along as he poured his entired soul into the old Utah Phillips song “Rock Salt And Nails” which was also made popular by Steve Young. I remmeber the very first one year anniversary show of W.B.Walker where they broadcast it from his living room couch, and I was turned onto Tyler’s music. My My My how time has grown us ALL. I was just a little blog and now much to Mr Tyler’s argument I have graduated into a Hobby Blog.

So “Honky Tonk Flame” was next along with “Boiler Room” as this set was choked full of some songs I haven’t heard live yet, I’m glad I indulged in this show. I’m sure I speak for my friend we had a wonderful time down there last weekend. Another song that blossoms forth a plethora of singer is the song “Nose To The Grindstone”. That song is becoming a working man’s anthem to be honest, as a Rheumatoid Arthritus patient I can see this song. I’m beat from years of hard work and body abuse, and I keep my nose to it as well.

“I Swear To God” was a good song and he followed that one with a song called “Purgatory” and accompanied that song with a short story about dating a Catholic girl. His wife now Miss Senora is also a very talented young lady and when I first heard of her she was Senora Mae Lainhart and now it’s Childers. They are both very talented and good hearted people I can’t get enough of.  Another powerfull song he sings called “Charleston Girl” was included in this set as well, that song is one of his more popular ones as well, I highly suggest you go pick up Live At The Red Barn Sessions albums.

“Lady May” was next and he followed that with a funny story about his new camper he bought from an honest Christian man and it may have been called “Country Squire”. Both he and Miss Senora are busy enjoying this new aquisition to his touring life, and buddy I don’t know shit about campers either but as many festivals as I cover I need one badly. He began to close his set with “Help Me Make It Through The Night” and “Time Of The Preacher” Reprise from Willie Nelsons concept album “Red Headed Stranger”.

His epic set was closed with “Follow You To Virgie” and a song that had the WHOLE PLACE singing along called “White House Road”. His songs are just so simple and easy to relate to however complex and poignant in their own manner as well. He defiantly isn’t singing about hipsters drinking lattes.

Miss Kelsey Waldon is one of my TOP 50 OF 2016 and anybody that wants to argue can TRY but you’ll not emerge victorious in any fashion. She IS a rising force within Americana Music or Red Dirt or whatever YOU want to label her I just call it GOOD STUFF, no fluffy lyrics or flashy anything just good pure Country Honky Tonk music. Unfortunately I have yet to feature her until NOW.

This above video is from one of the BEST songs of 2016 I knew of called ‘False King”, I mean the line “You can’t put a crown on the head of a clown and hope he turns out to be a king” is a stroke of genius in my opinion. From the first time I heard her thumping bass and steel infused music way back in late 2014 I was hooked on this woman.

“Dirty Old Town” was (as a lot of this set was) off her 2016 album of aforementioned accolade, and as I studied her style I noticed she has a pretty good stage presence and looked quite content within the confines of a venue such as this. That observation wasn’t always the forte of the younger ladies of Country Music but now in today’s local market the women are leading the pack for the lesser known music. It shall not remain lesser known if I have anything to do with it.

“You Can Have It” was next followed by “One Time Again” all of these songs were filled with ripping guitar solos as well as plenty of pedal steel and a fast paced whipping beat. This venue has in the past housed Legends of all types and in my opinion it’s an epicenter for the local bands and record junkies like me with Grimey’s up top. “Don’t Hurt” was next followed by a song she co-wrote with Country Music Legend Vern Gosdin called “There Must Be A Someone”.

“High In Heels” was one of the songs off her 2014 offering “Goldmine”, although I enjoy her new album more this album was also a highly suggested acquisition to your collection if you are asking my directions.  “Not My First Time” was next in her set along with “Traveling Down This Lonesome Road” now I want to touch on something here. That particular song showcases her vocal range really well as she hit high notes with little troubles, I especially watch for the LIVE act compared to the RECORDED act. She does WELL LIVE and you usually see that more in local music than the bigger acts but the woman NAILS it..now in the future I shall look for vocal consistency.

I also want to flip back for a moment to “False King” and something bands often lack, TIMING. That song has a brief  pause toward the end and the band pulled it off nicely. I was waiting for that to either shine or shit, it shined quite nicely there. “Heartbreak” was next followed by “All By Myself”, and ended with a much wanted  encore of Waylon’s “Are You Ready For The Country”.

All in all this show was worth way more than the tickets were priced at but I can see why Sunday prices are sketchy for attendance reasons. I would have paid 15 easily for just either of these acts by themselves…but the lower price left more room to buy STUFF, and we ALL need STUFF right? RIGHT. Buy STUFF from YOUR favorite local bands folks.