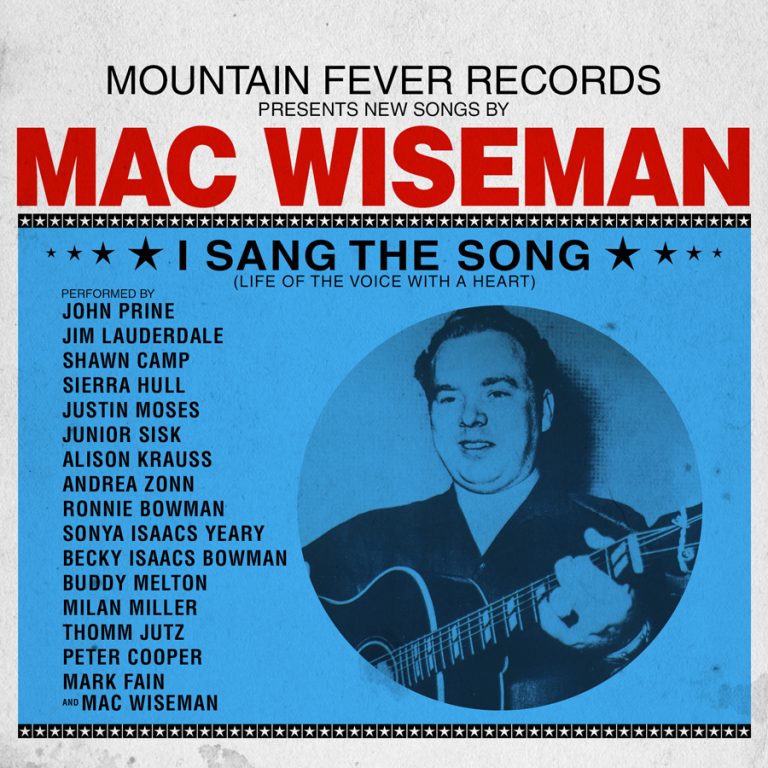 Before I go into this article any further I have a story of my own regarding Mac Wiseman and me. You know I have been covering Country Music functions from a journalist’s point of view for many many years now. Some years back, about two exactly in 2015 at the Al Meniah Shriner’s Temple in Nashville, where they hold the spring and fall annual R.O.P.E. functions, we were all blessed enough to witness Mr. Keith Bilbrey bring the Mic over to Mac Wiseman’s table where he performed a song for us in his chair. What a blessed a surreal experience that moment was, if I ever write a book this will be included in one of the chapters of it.

As I filter and shuffle through pictures of the past R.O.P.E. gathering I am reminded of past friends that have long been called home to Heaven, Mac Wiseman is one of those that remain prominently with us and we are honored to have him. We all adore him so very much and we need him around for many years to come.

This past January he released a new album called “I Sang The Song” Life Of The Voice With A Heart on Mountain Fever Records  he releases a new album of refreshing music that will embellish your collection quite nicely as this album already boasts a number one hit .

THIS FROM THE LABEL’S WEBSITE:
WILLIS, Virginia—Mountain Fever Records is proud to announce the release of a star-studded concept album celebrating the life and spirit of Country Music Hall of Fame member Mac Wiseman. I Sang The Song (Life Of The Voice With A Heart) is available today. The first single, “Going Back to Bristol,” featuring the International Bluegrass Music Association’s 2015 Male Vocalist of the Year Shawn Camp, was released November 2016 and reached #1 on Bluegrass Today’s Top 20 Songs December 23rd.

What began as a casual weekly visit among friends quickly morphed into an unprecedented album project. Over nine weeks, Country and Bluegrass Hall of Famer Mac Wiseman met with Peter Cooper and Thomm Jutz, sharing intimate details of his 91 years, and of his journey from Virginia boy to American roots music icon. That journey is the subject of I Sang The Song, the joyful and poignant album that springs from Mac’s storytelling sessions. In liner notes, Cooper writes, “The stories would have been remarkable coming from anyone. But coming from Mac Wiseman, an acknowledged master of American roots music who earned the nickname ‘The Voice with a Heart,’ the stories began to sound like songs. Thomm Jutz and I sat in small chairs that faced the easy chair, situated beneath a photograph of Pleasant Hill Church of the Brethren, Mac’s childhood place of worship. We wrote down the stories, and found them rich with melody and rhyme.”

To begin the recording process, producers Cooper and Jutz assembled an all-star band of musicians including mandolinist Sierra Hull and multi-instrumentalist Justin Moses—both also lent vocal talents—and bassist Mark Fain. Further, featured performers were carefully chosen based not only on artistic mastery, but also reverence for the album’s subject, Mac Wiseman. The result is a collection of perfect performances by John Prine, Jim Lauderdale, Shawn Camp, Junior Sisk, Alison Krauss, Andrea Zonn, Ronnie Bowman, Sonya Isaacs Yeary, Becky Isaacs Bowman, Buddy Melton, and Milan Miller, with special vocal appearances by Mac Wiseman. Cooper says, “Everyone who sings on this album understands the greatness of Mac Wiseman and the responsibility inherent in voicing Mac’s story and interpreting Mac’s words. These artists approached the songs with joyful reverence that is palpable to anyone who listens.”

In 1993 he was inducted into the International Bluegrass Music Hall Of Honor, and in 2014 he was blessed with an induction into the Country Music Hall Of Fame. In 2014 he also released a brand new album of songs inspired by his mother’s handwritten notebooks of songs she heard on the radio when Mac was a child: Songs From My Mother’s Hand.

However from researching this album further I learned that all of the songs on this album were penned over nine afternoons at Mr. Mac’s house with his producers.  He is already looking into the future to pursue more new projects and recording even more new music he has written, Mac Wiseman has recorded more albums and songs than artists I could name that are Legends.