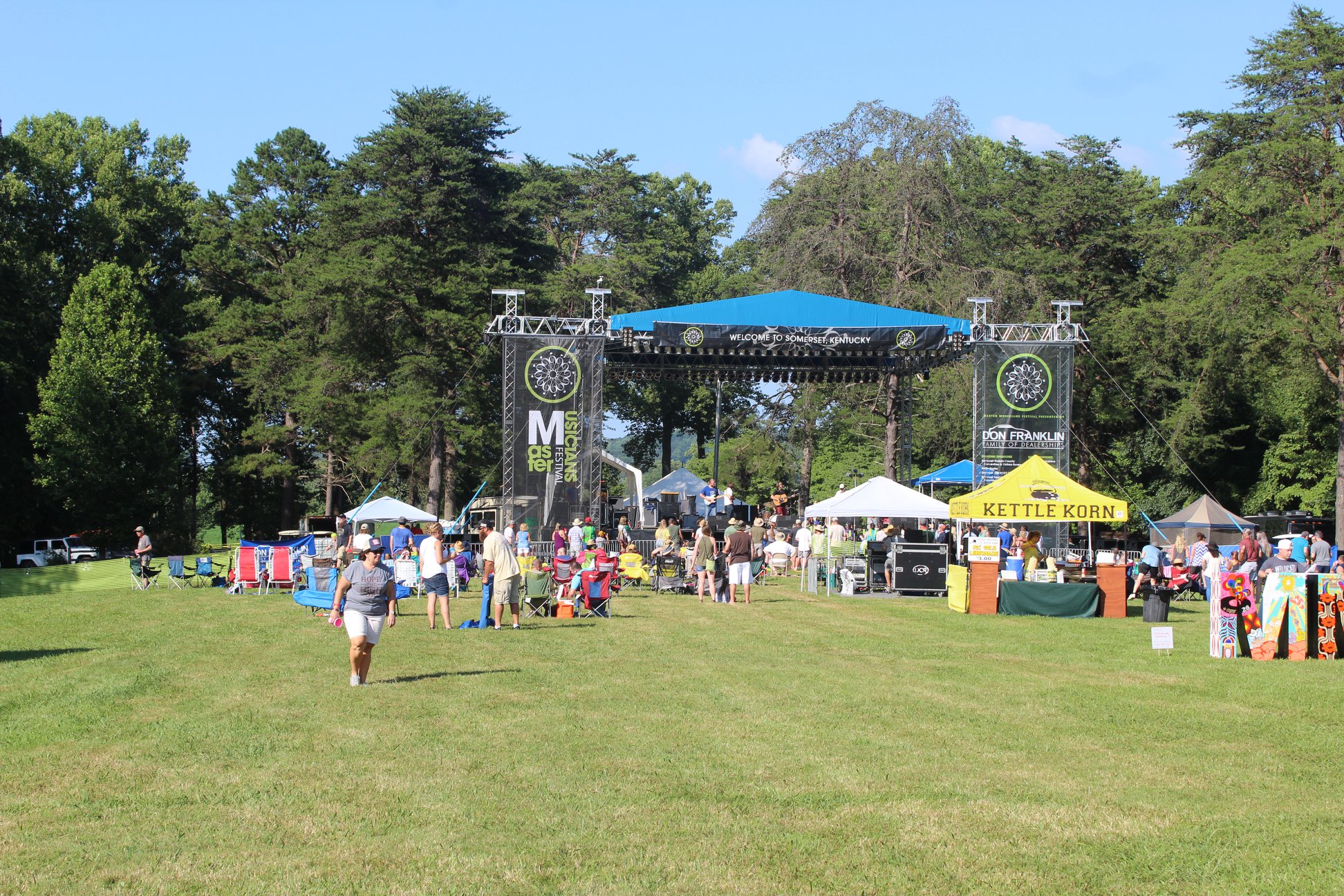 One of the many festivals I cover yearly ( whether in person or just online here ) is the Kentucky festival that I have attended in the past many times called Master Musicians Festival. Well, it is happening RIGHT NOW as I release the info on here, and I apologize for my VERY LATE news ( I have been SLAMMED HERE on the website )!

I try my best to release all of this info before the actual event, but there are some instances that simply prevent me from always doing that on here. However I figured better late than never and besides, the fine folks that organize the festival have always been strong supporters of my website throughout the years. Even though I have only been to two of their annual events, I still have a bunch of great memories and stories about attending this one.

I spent many a hot afternoons out there at that college campus writing about the festival from my vantage point, and celebrating the wonderful local community of Somerset Kentucky ( which isn’t entirely too far from me ).  I lost count of the many acts I have witnessed for the first time live, and others I have been around many times like Mr. Charley Crockett below.

There was a time that we suffered a nasty storm one year, where we were supposed to have has Mr. Jason Isbell and the 400 unit, but mother nature chose otherwise and they ended up having to cancel outright that weekend. Legends have abounded the stages of the festival over two decades, as this particular festival is one of the older annual events that exist across America.

What makes this one unique is the fashion that it implements the community into the equation of the celebration of all of the music. So many local businesses are honored there, along with individuals who practice arts and crafts, prepare food and serve the public in other forms.

The director Miss Tiffany Finley and her entire team of individuals work ardently throughout the year on this iconic event to bring you the best in every aspect of it’s completed form as the actual event transpires just like it is transpiring right now!

Her and her team brought us the magic of the Legend himself Mr. John Prine and my friend from West Virginia Mr. W.B.Walker, host of W.B. Walker’s Old Soul Radio Show had the honors to introduce him as he performed that year for us. That performance was my personal crown jewel favorite of all of the memories I have from this event.

So, with that in mind, I wanted to release some news about the festival in case you were planning on attending this weekend for one of two days of the event. I will always support this wonderful group of people and bands that come together for this event!

Grace Potter, The Wood Brothers, Marty Stuart, and more to perform; July 15 and 16 in Somerset, KY

“The MMF family is not only a collection of artists who have performed on our stages, it is a family in the most literal sense,” says Master Musicians Festival President and Media Director, Julie Harris. “Many of our board members over the years have been sons and daughters of founding members; many families and friend groups in our community have made attending MMF an annual tradition.

Festivals like ours cement a generational love of and appreciation for music and community. And that is the reason we devote ourselves as volunteers to the cause—to ensure that love lives on.”

This year’s Featured Artist is Nate Michaels, a freelance artist based in Louisville, Kentucky. He was raised on art and rock and roll, spending his younger years gigging in rock bands and traveling the midwest. As his collection of art began to grow, his music tours turned into a journey of visual art.

Now you can find Nate traveling all over the country on his “Have Art Will Travel” Tour. Nate brings life to the eyes of his portraits with an exuberant use of watercolor and India ink, while his more recent ventures have brought him to the endless valleys and crests of acrylic and the gentle slick kiss of oils. Most of his art speaks for itself as you can see the time and effort within each mark, stroke or medium.

His history in music and love for the stage has bled through into some of his earlier pieces, as you can find many legends in rock. The art piece created by Michaels portrays what not only festival goers will experience this year, but what the artists will experience as well. Seen from an artist’s viewpoint looking out into the crowd, Michaels captures the gorgeous backdrop of Somerset and highlights the magic set by Master Musicians Festival that while closely captured on canvas, can only be experienced in person.

“Every year, Master Musicians highlights a local or regional artist and commissions that person to create a piece that is auctioned at the festival, proceeds going back into the festival to ensure its longevity,” says Master Musicians Festival Executive Director, Tiffany Finley. “This is a long-standing tradition within our festival. That artwork is also featured on the front of our lineup T-shirt every year and is available for purchase as a poster.”

The 2022 Lifetime Achievement Award Recipient is Larry Roberts, who was born in Somerset in 1947 and raised to value hard work, pride in community, and service to others. Larry built a successful career as an electrician in many different roles including commercial wiring, lineman, and electrical inspector. Equipped with his electrical expertise and inspired by his love of music and pride in community, Larry served the Master Musicians Festival with passion for years. Present for the inception of the festival, he worked with a crew of volunteers to set up the initial electrical service at Somersport Park, then temporary service at Pulaski County Park, and later on, he worked to install the underground electrical wiring at today’s home for the festival on Somerset Community College’s campus.

Each year of service, Larry inspected the field to ensure a safe environment for musicians and festival goers before the first note of music was played. In addition to his role of lead electrician, Larry was a member of the MMF board of trustees for several terms in the 1990s and early 2000s. Among his many duties as a board member, he coordinated with vendors to assist them with set-up and utility needs, secured donations from local supply companies, and engaged in collaborative decision making to help the festival survive long-term. 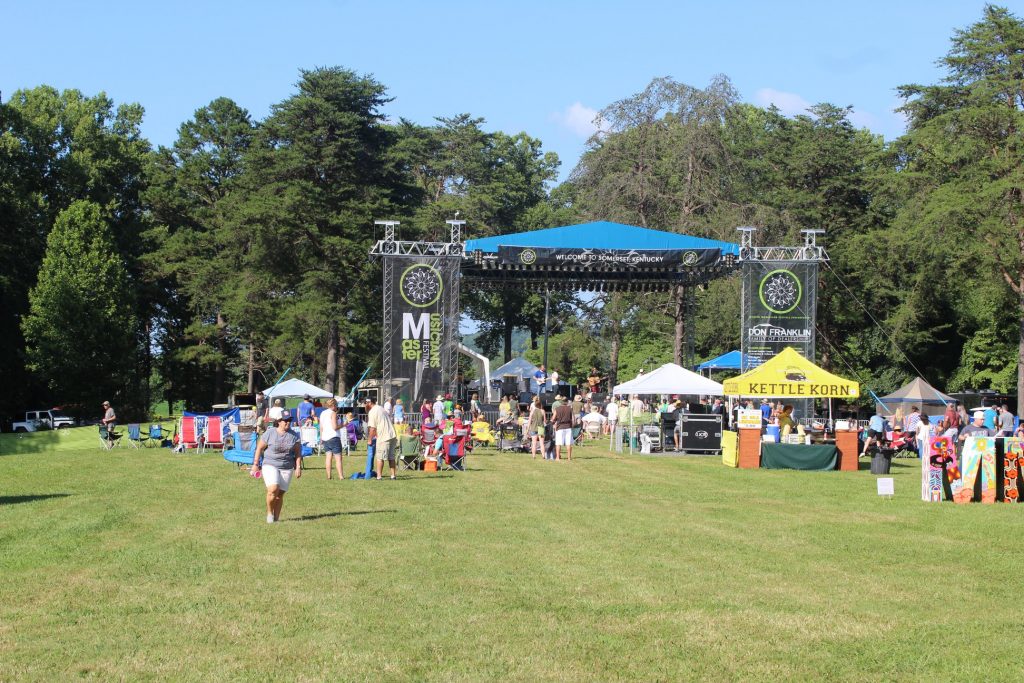 This year’s Featured Photographer is Meredith Frye. A self-described wife, mother, sister, daughter, friend, military spouse and momma, light lover, and passionate human being, she remembers receiving her first camera at age 8. Her approach to photography has always been to “bring light” into the lives of her subjects, to “find out what we have in common and to bring the light in each other to the surface.” She credits photography for “opening up a space where I can create and visually see the beauty in people and their surroundings.” A longtime friend and supporter of the festival, “Meredith is an incredibly talented photographer and a huge fan of Grace Potter,” says Julie Harris. “At our announcement party, we were so excited to see her reaction when we announced Grace was the headliner, and it was as priceless as we expected. We selected Meredith because of her talent, her love of community, and her love of Grace and music. We can’t wait to see what she produces at this year’s festival.”

More about Master Musicans Festival: This year, over the weekend of July 15-16 in Somerset, Kentucky. Master Musicians Festival, presented by the City of Somerset, will welcome GRAMMY-nominated roots-rock mainstay Grace Potter, the eclectic influences of super-trio The Wood Brothers, a long-time favorite of music fans and fellow musicians-alike, Marty Stuart & His Fabulous Superlatives, and the easy-going swagger of Rayland Baxter to the Horse Soldier Bourbon main stage. This same stage has seen the likes of the aforementioned Doc Watson, Guy Clark, and Willie Nelson, plus many more—the festival’s last few years alone saw Steve Earle, The Counting Crows, and the late, great John Prine take the stage. Additionally, acts like Boy Named Banjo, John R. Miller, and Leah Blevins will give Master Musicians Festival a taste of what the well-equipped future of this music holds.

Passing the torch along to the next generation is a cornerstone of the Master Musicians Festival ideology, so it only makes sense that the festival is exciting for fans of all ages. Kids 12 and under receive free admission with a ticket-holding adult and there are a plethora of activities for youngsters to enjoy. MMF partners with Somerset ART Studio to offer a free kids camp throughout the weekend. Kids can participate in instrument making, water balloon fights, bubbles, making glow jewelry, and participating in a special music set curated just for them. This year, local Master Musician and harmonica player Tommy Cate will host the kids’ jam at 3:50 p.m. Saturday in the Somersession Tent.