Mr. Dallas At The Palace, Yeah That Rhymes. 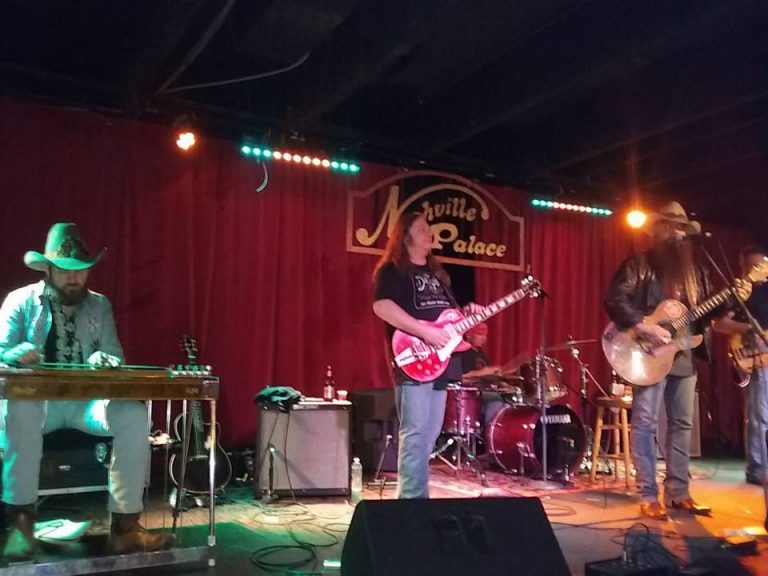 Folks I took a half a day off from work today to shoot down to the Nashville Palace, to see Dallas Moore play Nashville tonight for their Mardi Gras party. Tonight his band has none other than Mr. Brett Robinson from the 78s joining him, he is currently playing for Whitey Morgan. I was told they will doing some more work together on upcoming projects as he is off the road later this year. Not to steer away from Mr Dallas but Whitey is recording a new album and touring in 2107 and I sat for a spell and talked with him in order to include him in my Steel Guitarists Along The road series, that addition is being worked on NOW.

The anticipation filled the air tonight and the ambiance is placid as it always is right before a Dallas Moore show, but that ease of clam becomes abruptly halted as this man and his band of rabble rouses take command of that stage. Mr. Dallas stands stalwart and sings with authority on the matters of whiskey, honky tonking and all things Outlaw Country.

He joins the roster for the 2017 Muddy Roots main festival in Cookeville Tennessee for the first time ever, and let me tell you I am daggumed excited about seeing him in the field this year. He is one of the hardest working bands on the planet playing a remarkable 320 shows a year, with a baby on the way still maintaining a name for himself in the public eye. Despite his outward rough demeanor on the inside when you get to know him as a friend you’ll find he is one the kindest and gentle individuals one could ever encounter.  He is well oiled in his craft of both writing and playing with many genres of influence under his hat, he can belt out Motorhead and Beethoven all on a whim in the same instrumental.

He comes from a line of music with his cousin being the equally talented Pee Wee Moore And The Awful Dreadful Snakes, and his Godfather being Country Legend Jody Payne. His son Waylon Payne of equal accolades within the realms of Country Music having contributed greatly to the recent Miranda Lambert album, which in my opinion was a SMASH.

They opened the show with “Can’t You See” by the Marshall Tucker Band wrote in 1973 by Toy Caldwell and it was on their debut album I grew up with. “Whiskey River” by Johnny Bush and made more popular by Willie Nelson on the 1973 album Shotgun Willie.

I recently got new laptop and I am trying to work all of the kinks out of it like running my website from mobile locations…I did not fare so well tonight. Fear not folks because I can cover the show with pen and paper after all it IS Mr. Dallas. I now have all four of my computer inter linked and ready for field battle during the 2017 festival season.

After playing “Freeborn Man” by the Outlaws off the Lady In Waiting album, he got into all of his originals like “Twisting Through Texas” and “Bottle And A Bible”, man we truly were given a treat tonight with Mr Brett on steel guitar. My favorite song he plays was next “Slinging Gravel” from the Dark Horse Rider album, and after that he played “Beats All I Ever Seen”…but the Cowboys no longer have Romo.

Speaking of Twisting Through Texas Mr. Dallas is the recipient of the 2017 Ameripolitan Award for Outlaw Male Artist and like I previously stated it’s all well deserved. He and his band are well known all over the United states. As always in honor of our fallen friend Wayne Mills he played “The Last Honky Tonk” and followed that up with George Straits “Cowboy Rides Away” which was Mr. Sonny Thockmorton’s 1985 hit for King George. “Long Haired Country Boy” by Charlie Daniels was next from his smash album Fire On The Mountain.

As always I have included a video, this is their version of “Waylon’s Lonesome Onry And Mean” that I firmly believe Mr. Steve Young would approve of, and he played his newest song “Shoot Out The Lights”, along with “Drink To The Good Times”. Right now he is playing “Up On That Mountain”, which I believe he wrote about Altamont the first place I ever met Mr. Dallas. The many stories and memories I have about that bitter cold weekend have embedded a special place in my heart and I cannot replace attending that event.

He played a long drawn out instrumental version of the “Nightlife Ain’t No Good Life” and  barrelled into one called “This Old Cowboy”, then played a few more originals like “Crazy Again”. He plated his Outlaw Country anthem entitled “Blessed Be The Bad Ones” off one of his after albums of the same name. He played his own version of the Allman Brothers “Whipping Post” and closed the show with with his amazing versatile guitar chops.

You know behind every successful artist are those that labor behind the scenes, and his wife Miss Jenna  Moore does a remarkable job keeping Mr. Dallas afloat. His band AKA “The Snatch Wranglers” are also NO exception when it comes to working. Lucky Chuckie, Mr. Mike Owens, Mr. Tony and Mr. Rocky Parnell are four of the finest musicians to ever grace the stages of the local clubs and venues. Each one of them are incredible players in their own right and deserve to be commended for what they do.

In closing I firmly believe that this is not even close to the pinnacle of the career of Dallas Moore. There exists a whole world of opportunities for this man and his band of renegades to beat the shit out of. So many venues and podcasts that are in dire need of the Dallas Moore sound and I think that Ohio holds a gigantic scene of fine underground music, Dallas Moore being a pillar of it all.