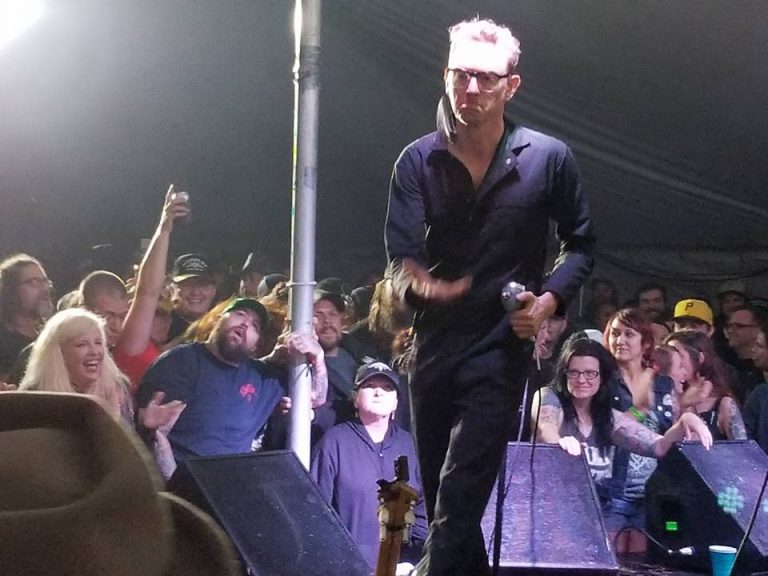 Well friends and neighbors I want to take a moment here and reflect on some things. I’m amazed at the growth of my small operation here, and what began as a hobby has blossomed into an actual business. Now five years later I have others working for me, and I can now cover NEW festivals and NEW markets while they cover my festivals I am already established at.

I was blessed enough to travel to over 14 states last year, to many different music scenes and shows. I mean literally hundreds of live shows last year, seven festivals and I visited West Virginia for W.B. Walker’s Old Soul Radio Show anniversary show. I have sat in so many Honky Tonks and watched so many bands perform, and studied many a musician. It’s NOT easy to pinpoint just ONE special performer to crown as artist that shines above all others to say they deserve to be THE artist of the year…BUT….

After much contemplation and judgement I HAVE pinpointed that VERY band in Th Legendary Shack Shakers and Mr. J.D. Wilkes. I’m sure after you read this article you will also agree that Mr. J.D. does indeed deserve this hallowed honor above all honors on this website. See this isn’t only because of his music, this is bestowed upon him because of his passionate personal love of history and preservation of music and art in general.

First I’m going to go back a few years to Muddy Roots Music Festival two years back in 2016, where Mr. J.D. played a terrific solo set on the old wood stage. He brought out an old piano that they used on Tin Pan Alley, back in the day and took us on a journey into history, as he played songs like “Bible, Candle And Skull” from the album Pandelirium .

He taught us about the times of Tin Pan Alley, before and during the great depression, when it was actually the driving force of entertainment that began in New York and trickled into the entire country. It made me WANT to go home and READ and study about this little place on West 28th. His set left me with greater knowledge then whence I came, and THAT was a true gift from him to me. Knowledge is power and sharing this power is something I cannot repay him for, I can only repay him by thanking him in public for caring enough to play that set.

This past spring at the Nashville Boogie this band stood out above the rest for sure. I mean for God’s sake they came out and began thrashing around like we were in an old club downtown…but yet we were in a ballroom. On the other side of that curtain you had classic cars, on the other side you have Mr. J.D. Wilkes going bonkers onstage diving into the audience.

Easily one of the highest energy sets of the entire Boogie I’ll never forget the night after at the Nashville Palace where Mr. J.D. got up on stage and joined Hillbilly Casino’s Mr. Ronnie Crutcher for a harmonica battle. That place was FULLEST I had ever saw the bar packed, the crowd were packed in like sardines as Mr. J.D. and company once again tore up the joint with harmonica licks that needed no amplifications.

Th’ Legendary Shack Shakers have gone through changes in the past years, and put out albums going in several directions. But this past summer for the Muddy Roots Cookeville festival, my favorite Shakers lineup played BY FAR the most epic Muddy Roots set they have EVER played.

This lanky man danced around the stage and bellowed out song after song of those beloved hits like ‘No Such Thing”  and “Dump Road Yodel” as the rest of the band just absolutely went ape shit. We had gorgeous weather last year and a huge attendance with a full tent.

He began looking around for mischief to get into, I could tell by his peeking around the stage as the show progressed that this eclectic front man was planning an exhibit of both dexterity and showmanship. I mean for God’s sake we already paid for an entire festival, yet all of these bands continuously tried to outdo one another on stage.

Alas, Mr. J.D. Wilkes did indeed outdo everyone last year at Muddy Roots in my opinion. As they pounded out songs which included his classic harmonica and special mic, he sang and played UPSIDE DOWN hanging from the rafters BY HIS LEGS…you will see my buddy Dustin Doug in one of these pictures up above as he howls and raises his fists in pure delight upon this spectacle.

These performances make an absolutely amazing minded musician MY artist of 2017, hands down. There is not one iota of doubt in my mind as I type this that he does not deserve this accolade, and at this time the future of  Th Legendary Shack Shakers is once again strengthened as they hit my TOP 50 OF 2017 with their new album called After You’ve Gone.

Once again Mr. J.D. takes the fans to the days of old fashioned cartoon animation, with their new video that features Posey. You know this video is modeled after the Betty Boop era cartoons, rubber legs and such. You can read my TOP 50 article where I talk about it more. Once again he honors his adoration of history and old time entertainment, as he incorporates that with his music.

And now, soon he will be releasing his solo album, that will garner much attention on this website from my right arm Mr. Joshua Wallace. He will be reviewing this new album very soon, and I’ll of course juxtapose this article with that article for sure.