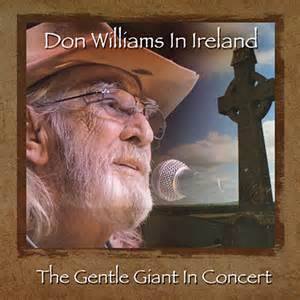 I tell you what 2016 has been a year of ups and downs for sure, it’s been brutal in the death department taking a TON of our Legends and songwriters already. Country Music is becoming very volatile and tender as Legends like Mel Tillis and Dr. Ralph Stanley remain stable but very frail, it’s nothing more than old age.

Another beloved Legend that we still have with us is Don Williams who recently planned some 2016 tour dates but was forced to withdraw them and retire form public appearances altogether.
He DOES however plan to continue to release albums in his own signature “Gentle Giant” fashion.

In 42 years Don Williams has amassed 21 number one hits from 27 studio albums and many LIVE albums like this one from Ireland. THIS album will for sure be on my TOP 50 of 2016, in fact it might even be on my TOP 10 it was that damn good. You know folks Don Williams never was a real big public speaker with much dialog during his concerts, he’s NOT known for talking lots or telling stories in his sets. Instead he just stands (now sits) and sings hit after hit from an endless catalog of familiar solid gold.

However on this album during the song “You’re My Best Friend” the crowd loved this song so much they all sang along and for a brief moment he stopped singing and they sang to him and he replied with a deep growling “Yeah”. Eventually toward the end of the song he allowed the crowd to sing the entire chorus and had them sing it twice, you can tell he had a wonderful time with these folks. “You don’t know how pretty that is” is what he said toward the end of the song.

He does indeed stop and acknowledge how truly wonderful the audience was to him in Ireland that night, however it is still minimal talking for someone who has so much history behind his eyes. This album contains some truly awesome performances of classics like “Amanda” and “Some Broken Hearts Never Mend”. In the beginning of the album he pretty much barrels into song after song without stopping, which pretty much sums up the amount of songs on the album for only being one album and not a two disc set.

This album is filled with so many top hits of his done with so much heart and soul that it quickly became one of my top favorite live albums ever, EVER! And with a stellar lineup of 19 songs on it, it is WELL worth the minimal 12 dollar price online.You will not find a better version of “Tulsa Time” anywhere on any of his previous live albums.

Now many of you will (up until now) state that the song Louisiana Saturday Night was first cut by Mel McDaniel, well it’s not true. It was originally recorded first by Don Williams in 1977 on the album “Country Boy” and it was written by powerhouse Bob McDill who wrote so many Don Williams classics it’s not know how many total. And with the team of Bob McDill, Don Willaims and producer Garth Fundis they provided Country Music with a slew of over 20 albums spanning Don’s 4 decades of smooth vocals and gritty guitar playing.