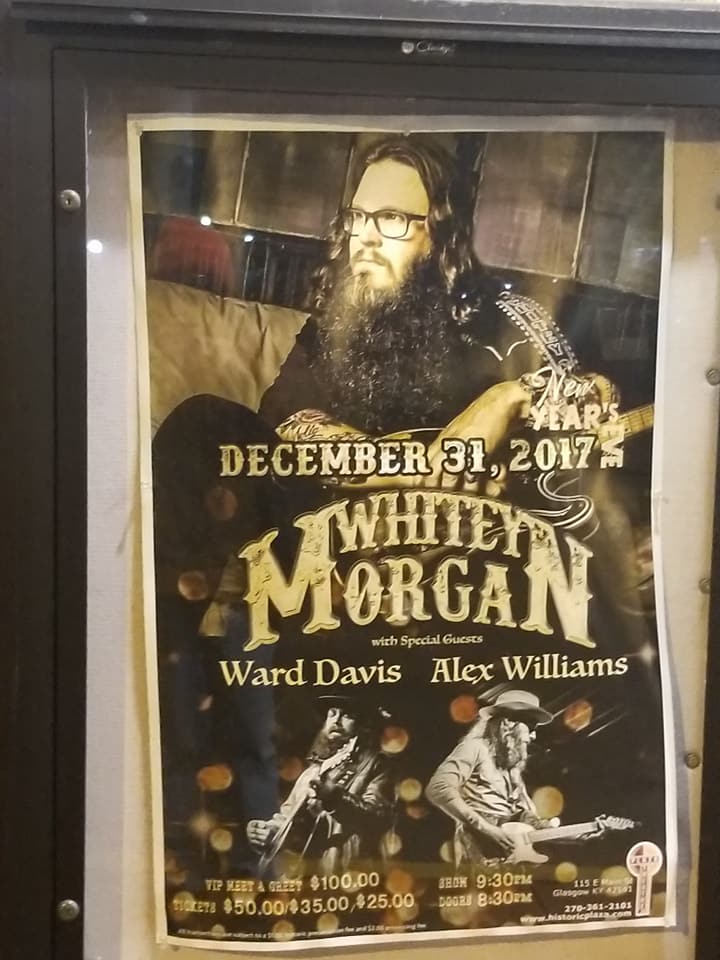 Tonight ,I braved some bitter cold on a new year’s eve night to go up to Glasgow Kentucky to a venue I have never reported a show from before, The Plaza Theater. Tonight is a special night for life and memories..it’s a first for MANY things for yours truly over here. Honestly I have no idea where to begin on the new, I try my best to keep this into the music only and not too personal but I HAD to share this..

Tonight is the first new year’s eve I have not drank any alcohol of any type for the entire duration of the night, in fact I haven’t had anything to drink in two weeks. I had to stop physically, my liver was damaged dramatically. So NOW I will just listen to songs about whiskey and barrooms instead of imbibing myself, to be completely honest I don’t miss it really..so far..

So now on to my next FIRST here tonight which I am proud of. I am reporting tonight from the Plaza Theater in Glasgow Kentucky in the second row for Mr. Whitey Morgan And The 78’s who played tonight with guests Mr. Ward Davis and Mr. Alex Williams. Also playing tonight was Mr. Josh Card And The Restless Souls. Now if you have never been to a show at the Plaza Theater , you need to experience it sometime. I already have an inside joke with the manager..they have REALLY good security. Well, this media job isn’t always backstage passes and free food, rules are rules and it’s understandable even with knowing all of the parties involved..so for this round folks NO videos.

If you will recall from last weekend I reported on Mr. Ward Davis and Tennessee Jet, with Mr. Channing Wilson you can read that RIGHT HERE. So tonight is the first time I have covered any band (or artist) twice in two weeks.ALSO, last night my TOP 50 OF 2017 was released. And Mr. Alex Williams is on that said list, so this is the first time I have covered a TOP 50 act the same night the list drops! Ergo, I am VERY ecstatic to elaborate on this show tonight.

The venue is a VERY beautiful and historic building with a pleasant ambiance and really cushy seats. A very nice front area before the stage, ample parking and a balcony. Also the handicapped area was quite spacious and nice. One of the only complaints was the bathroom set up was not enough to accommodate a full house. The theater was REALLY cold inside, however tonight is deathly freezing out, unseasonably cold indeed. ..and there were ample exits. The staff was EXTREMELY FRIENDLY and made it a very enjoyable show, EVERY member greeted me and wished a happy new year..several asked me if I needed seating location help. This venue rivals the Opry indeed!

The first up was Mr. Josh Card and the Restless Souls (you can buy his album on his name up above), is actually a side project of the acoustic guitar wizard you see onstage with Whitey Morgan.  You know much like the old days when Ernest Tubb wielded his Texas Troubadours all over America, The 78’s bear their own tight sound. They make Whitey Morgan Whitey Morgan if that makes any sense, I’m sure he would agree . I firmly believe his sound would change if he lost any of the members right now, you know E.T.’s sound DID change with the rotation of steel guitarists and drummers (in what I call) evolutionary periods of his tenure. Ergo, out of those times some of Country Music’s most influential stars emanated from the Texas Troubadours..I deem this is what we are seeing begin here with Mr. Josh

His 10 song album that was released in 2017 (that sounds weird) was impressive to me here, and although it didn’t make my TOP 50 it WAS an essential album to buy..SO GO CLICK UP THERE AND BUY IT. Yes from the very first song called “Go On And Get Gone” is a terrific song about kicking out a girl that throws the past in your face constantly. Usually within a week she’s back apologizing, and you just say GO ON AND GET GONE!

Mr. Cameron Cochran played some MIGHTY FINE steel guitar on this album here for this song “Call My Name” I pretty much related this to the alcohol calling my name at times, LAST NIGHT was funny to be sober when watching all these Morgan fans getting wasted in this fancy theater. Being drunk is FINE as long as YOU have a ride home, I’m hoping nobody was arrested last night. Find a NEW ME and I changed everything was a powerful lyric in that song.

I spoke to him not long ago and he told me that “History is everything, It’s what lays the guidelines for us to continue and innovate us as we go”. So the choices of covers he played here after the song “Meet Me’, were further proof of that statement.  “Never Go around Mirrors” was a hit for Lefty Frizzell  in 1973 which was also penned by Sanger  D. Shafer , however Mr. Josh played in in the 80’s style of Mr. Keith Whitley, additionally Merle Haggard made it a hit, Gene Watson, Daryle Singletary…etc… speaking of Merle Mr. Josh played ‘the Bottle Let Me Down”.

Back to originals here he played “Chase You Away” before playing “Bar Exam’. Originally I first heard this one in 2001 by the Derailers, however I’m not sure if indeed that was a cover of some rare B side I haven’t uncovered yet. But honestly that’s the FUN of this journalism gig, finding information like that.

Mr. Alex Williams made my TOP 50 Of 2017, with an impressive compilation of songs and right now he is in the works for a new album already. he played a new song halfway into his set called “Hard Living Blues”. I wish I could have recorded that on video but I was under a no video policy for this article.

“Hellbent Hallelujah” was the opener here as her just barreled into the rest of his list. He did very little speaking and acknowledged the crowd with a musical assault of Outlaw badassery. “Little Too Stoned”  was a prime example of the prime Honky Tonk beat that encompass Outlaw Country in today’s day.

He closed his portion of the show by switching to his acoustic guitar and playing the song he wrote about his grandfather called “Old Tattoo”. That song pretty much moved this album to “Definite Top 50 Worthy” and one reason why I placed it on there.

As I previously stated I covered Mr. Ward Davis last weekend and had a LOT of fun there, this set being a little shorter than previous. He opened with “Nothing At Home” and the song that Mr. Ray Scott wrote called “Pappa And Mamma”, which addresses physical abuse.

He brought the house down once again with the beautiful ballad called ‘Old Wore Out Cowboys” that garnered help from the likes of Jamey Johnson and Willie Nelson. Speaking of Willie Nelson he played a cover of the “Highwaymen”, as he does in every set. But perhaps the highest pinnacle of his set is the song he wrote with Mr. Cody Jinks called ‘I’m Not The Devil”. Pretty much every show he has us ALL singing along to that one.

His set closed with “Get To Work Whiskey” and finally his title track to his album called ’15 Years In A 10 Year Town”. I might have to break off of the Outlaw scene for a few weeks to cover other genres for sure, but YOU KNOW I’ll be back to it soon….now for Whitey Morgan.

His self titled 2010 release contained the first song “Bad News” which opened the show tonight, and set the tone for the evening with “Buick City Blues”. Both of these songs were on his recently released live from flint, and in 2018, I am anxiously awaiting the arrival of a NEW Whitey Morgan album.

I absolutely adore the pop and twang intro to the song “Cocaine Train” which was made popular by Johnny Paycheck, although I truly enjoy their version  of this song, along with “Low Down On Backstreet”. That song was off their 2015 album Sonic Ranch. “Back To Back” was from their first album,which I really enjoyed.

This was a gargantuan set tonight down here, with songs from days of old like ‘Prove It All To You” from the first album. We were treated to a terrific version of “Still Drunk Still Crazy And Still Blue”. That song was made popular by Scott H Biram and also included was “Honky Tonk Queen”.

The song that was written by Country Legend Dale Watson called “Where Do You Want It” which is about Country Legend Billy Joe Shaver asking a well deserving idiot where he wants to be shot. Another really good song in this set was “Goin’ Down Drinking”, off the 2015 album Sonic Ranch. “Crazy” was one of the songs off the second album along with “Memories Cost A Lot”.

Whitey leads his band with great poise up there onstage and has evolved into a true figure that represents Outlaw Country music quite well. I could tell he wasn’t feeling well last night but ergo, he gave it 100 percent by all means. With songs like “I Ain’t Drunk”, he ushered in the new year with us in fine Outlaw style. He closed with the Marshal Tucker Band ‘Fire On The Mountain” before going into his encore, and re entering the stage area.

His encore contained “Sinner” and another favorite he does “Waiting Round To Die”. Ultimately this show was a blockbuster fashion to spend my new years eve in my NEW sober state. It’s NOT really that bad being the sober one at all these music shows, after all it’s MY job to remember what was played so YOU can enjoy THESE articles.