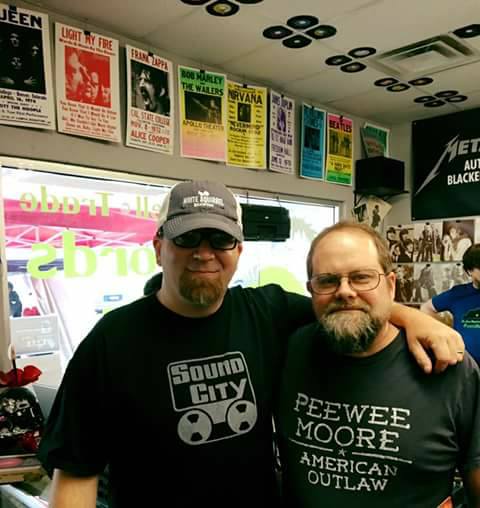 So last year I got up at 4AM and stood in line to get what would end up being my number ONE album of 2017 Billy Don Burns a Night In Room 8READ ABOUT IT HERE. Well this year I left at 8 AM and found what I wanted and still had fun, like every year my buddy Shooter Jennings and his label Black Country Rock or BCR released TWO albums you can only find in stores for today’s festivities.

The weather prohibited outdoors live music so there were sets inside the store and I’ll be bringing you the set from my good friend Dean Collier AKA Captain Deen and although it’s not Country, I am pretty sure many of you will indeed enjoy his local music in this unique style here. I had fun today and wore myself out pretty hardcore from running around record hunting.

I first went down to Mellow Matts in Bowling Green to buy my first round of new ones I was telling you about from Shooter Jennings and they are Shooter Jennings and Waymore’s Outlaws LIVE, and the Waylon Forever reissue. I also bought some used albums and other things. This is from BCR Facebook page:

Waylon Forever consists of Waylon Jennings’ recordings that took place in the 1990s, and later rediscovered and reworked by his son, Shooter Jennings. Shooter joined forces with producer Dave Cobb, and reworked the songs to bring us Waylon Forever in 2008. Shooter used his backing band, the .357’s, to recreate these works and revision them into country/rock versions of some well-known and unheard tracks. Now, Black Country Rock will be releasing the production on a limited number of clear orange vinyl, and for a limited time for Record Store Day 2017.

Black Country Rock is happy to announce the ONLY live recordings of one of the most sought after tours of its time. Shooter Jennings has paired up with Waylon Jennings’ original recording and touring band, Waymore’s Outlaws, on what has been an unforgettable round of live shows. This will be available for a limited time on clear vinyl for Record Store Day 2017.

I wanted to point out this LIVE album was recorded in one of my favorite venues the V Club in Huntington West Virginia and also the Grey Eagle in Asheville North Carolina. That gas station food across the street in that place called Sheetz was GREAT FOOD for a quick mart type place. And Mr. Don Duncan that runs the door and merch out there is a VERY nice man, that crew is VERY kind to my website when we go up there.

TRACK LISTING FOR LIVE ALBUM:
Are You Ready For The Country
Luckenbach, Tx
Good Ol’ Boys
Outlaw You
Don’t Wait Up (I’m Playing Possum)
Manifesto No. 1
The Song Is Still Slipping Away
Can You Come Over?
I’m Left, You’re Right, She’s Gone
Gone To Carolina
4rth Of July/Good Time Charlie (for Jon)

TRACK LISTING FOR WAYLON FOREVER:
Jack Of Diamonds
Outlaw Shit
I Ain’t Livin Long Like This
Are You Ready For The Country
Lonesome On’ry And Mean
Waymore’s blues
White Room
I Found The Body

Then I took a quick detour to go to The Great Escape where I bought a bunch of used albums at great prices and ran into Miss Mary Sparr, and caught up with her. She manages my 2016 Artist Of The Year Colter Wall who is busy on the road with Cody Jinks and others.
I’ll be featuring his new self titled album VERY SOON and also I’ll be featuring his set at the Tumbleweed Festival in July in Kansas City.

Then I ventured back to Mellow Matts for some Heavy Metal with my friend Captain Deen from Bowling Green Kentucky. He’s doing a pretty unique type of metal with his bass guitar and I’ll feature some videos here and here was his setlist today: