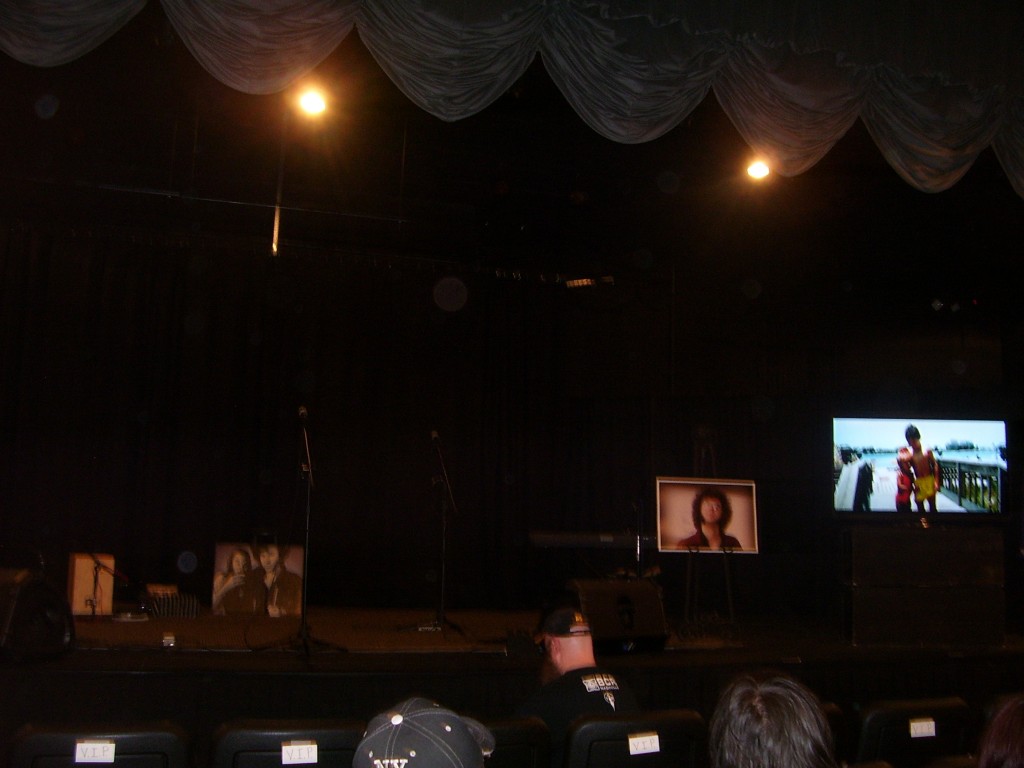 Last night in Powderly Kentucky at the Merle Travis Music Center several of us gathered for a first ever July 4rth performance from Shooter Jennings in honor of his manager and brother “Colonel” Jon Hensley. This show included special shirts only available last night at the show and some TRULY wonderful artwork by my good friend Kenneth Marr. Everything was donated to help the family pay for the final expenses for his services that took place several weeks ago.

The Merle Travis Music Center is really a beautiful place to see live music, the seats were SO comfortable and the venue was gorgeous. It had a large stage with good sound, and even though it only seats about 300 people it is still a truly good venue. I’ll warn you up front if you are a drinker during live music you won’t find any here, this county is dry. The venue doesn’t serve any alcohol but it did have food, which was donated for this event.

There were several show cases of memorabilia from Country music Legend Merle Travis, who wrote the song “Sixteen Tons” among contributing more to Country Music. I had a good time nerding out on the display cases and of course I HAD to dissect and analyze each piece I looked at for information and dates.

The show began with his mother coming out and speaking about Jon’s life. Of course it wasn’t EVERYTHING about him but some of the things that she shared with us were truly special. It’s true nobody on Earth loves you more than mom you cannot second rate a mom’s love for her child. This was truly evident last night in many ways as she shared her memories about Jon. I only knew Jon for a couple years but I too have some great stories about the Colonel.

She shared with us stories of his youth and how he became fascinated with vinyl records and radio disc jockeys. There was a story of Stan Barnett and how he influenced Jon with his obsession for Elvis Presley and the person responsible for giving him his first vinyl album..”Man In The Mirror”.

Stories of their backstage time at the Opry as they admired Diamond Rio and Confederate Railroad. Just the other night I was told Confederate Railroad is being targeted by these “issues” with the confederate battle flag by music festivals dropping them from rosters. My first thought was “What would Jon truly say”? His mother said Jon was ALL about the music and ALL about business, he knew how to make money doing what he loved so dearly. I know for a fact he revolutionized part of anybody’s career he managed. He began an internet radio show called “Dark Side Of The Radio” and began making CD’s of it and got into country more and later began one called “Are You Ready For The Country?”

Jon and I shared a common interest because for my age people often tell me they enjoy my knowledge of Country Music facts. Well, Jon was ten years younger than me so coming from him that was very unique and real. Jon knew a lot more than I do and always encouraged me to strive to gain more knowledge. In fact one of the performers Michael Farmer said it best about Jon Hensley: ” He Believed in people that didn’t believe in themselves”. Jon saw talent and potential in me, and often told me I was “fellow historian”. She told us about his relationship with Lloyd Settle director of “the Goose On The Lake” festival in Allerge Kentucky not far from my house.

J.D.Myers came out and played a truly great rendition of “Suspicious Minds” a song that Jon heard him play from going to see him perform at the Wheel in Nashville. And as I mentioned before Michael Farmer came out and played some VERY NICE songs one called “the Concept Of You” that will be cut by Julie Roberts and Produced by Shooter for BCR records. He played another called “Mountain Music” and I truly enjoyed his vocals VERY pretty.

Julie Roberts came out and performed a song from her 2004 debut album called “Now Way Out”. Her first album was truly one of my favorite albums of that year and I have been a fan of hers for some time now. I’m TRULY eagerly awaiting her BCR album which I’ll tell you about later on.

She continued on with “Wake Up Older” and played a song by Bobbie Gentry called “He Made A Woman Out Of Me”. I enjoyed her version of this song. That song was on her album “Fancy” and is one of my personal favorite albums Bobbie Gentry recorded. She closed her set with my two favorite songs she does called “Old Habits” (NOT the Hank Williams Jr song of the same title)..and “Break Down Here”. Break Down Here was her first single ever and it was good. Also if you want to check out another good song she does “Men And Mascara” (always run) is really awesome, she has some really well written songs and you can tell she’s influenced heavily by Lee Ann Womack.

Shooter Jennings came out and played the seven minute long Bob Dylan classic “Isis” and there was no band, just him with an acoustic performance. I tell you what it was WELL WORTH every penny we paid. Shooter is really good by himself with his guitar (that he joked about because it kept falling out of tune). We didn’t care..it was truly a special intimate performance from Shooter. It was a small theater and everybody could get close to him and he sounded REAL good.

“Outlaw You” was next and after performing that he went into a story about Jon..Shooter was performing at another venue years ago and apparently the attendance was not going to be that good so Jon called the venue pretending to be Dwight Yoakam’s manager and stated that Dwight was coming to perform and security needed to be upped. Shooter said word spread like wildfire and attendance shot up and he was concerned about the show. Shooter’s story had the WHOLE theater laughing, what a truly fine example of the intelligence Jon had for flair. He knew how to stir things up and make an entrance, and he knew the business of show business. He truly was one of a kind…there were no “copies” of Jon Hensley I promise you that.

“Gone To Carolina” was next and that’s one of the songs I love to hear stripped down and acoustic. He did a wonderful job on it and I enjoyed it and he played “Nashville From Afar” which was on his recent EP. He then was joined by Julie Roberts for a song his mother Jessi Colter wrote. You know what I didn’t catch the name of it?

He continued on with “Playing Possum” and another called “The Song Is Still Slipping Away” which was a good one from the album Electric Rodeo. He played a few covers one Elvis cover and a Nirvana cover off the “Nevermind” album, Shooter always has had a very wide array of musical influences and that’s one reason he and Jon got along so well. He followed that with a VERY GOOD version of “Gunslinger” and his most commercially popular song “4rth Of July”. Now then folks I’ll say THIS, this will become an annual event. I HATE using “first annual” in the name of ANY music related event. But they have ALL stated the venue is reserved for 2016 4rth of July and I think Jon is WELL pleased at everyone that showed up. Shooter closed his set with “Good Time Charlie’s Got The Blues”. It honestly was a magical night full of music and love for a one of a kind individual that shall remain on my sidebar for as long as I do this website: Colonel Jon Hensley: The Last Mogul.

Fare Thee Well my friend and don’t spare any fairy dust. Let’s spread that stuff all over! Until we meet again Jon I’ll never stop building my dreams. And I shall always be in the audience at some show some where or festival. Local music needs me, overlooked mainstream music needs me, songwriters need me and I need THEM. We love you.