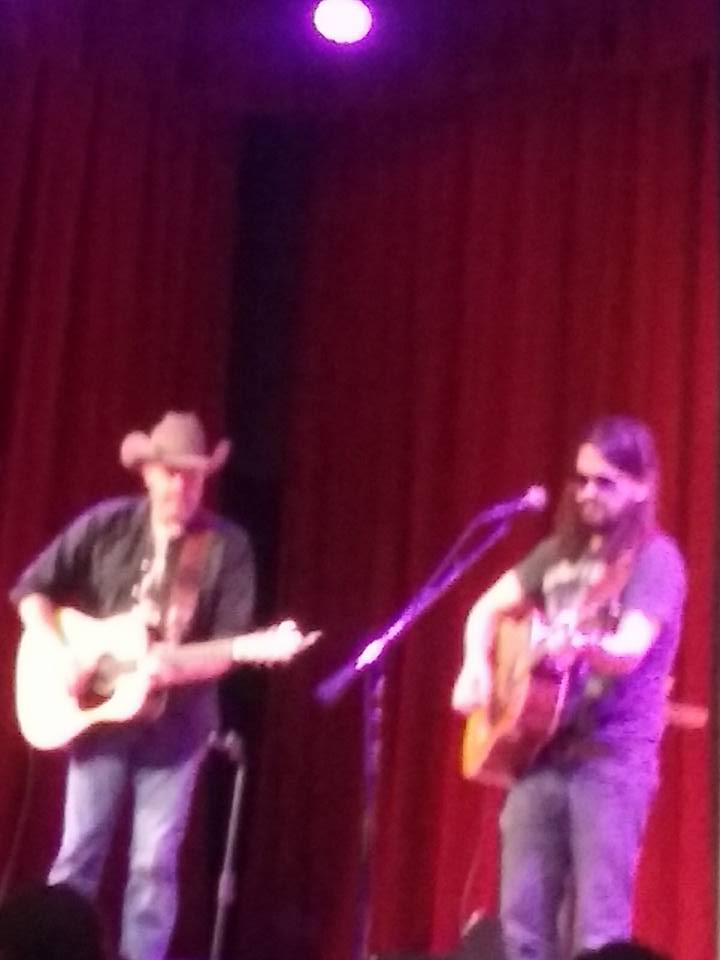 Folks I am here at Nashville City Winery for a short surprise visit with Shooter Jennings with his tour mate Jason Boland for a special acoustic song swap, to be honest this setting is my favorite kind of fashion to see ANY artist. They can tell stories and you can study them easier and watch their movements and chords. I think since there is no band that there is no push on them or dependence on timing and you get a better perspective of their songs.

They basically just traded off songs and played acoustic leads for one another as they entertained us with their own songs tonight. Shooter started the show tonight with his song “Outlaw You” and like I said this is a fashion you just never get to hear very often. Very laid back and relaxed although Shooter give us permission to get F’n loud but we were a well behaved crowd I thought.

Then he turned it over to Jason Boland who played the song “Electric Bill”  off his album “Dark And Dirty Mile” in his timeless classic Jason Boland style of presentation. I just love the style of carrying his vocals through the well written songs he has and his  precise way of hitting his notes that accompany those songs well.

Json Boland sang a truly touching song that is a back story to the classic “Long Black Veil” where he falsely testified and framed a man for murder who was executed as he watched. There was a powerful line in the song “I Swore Upon A Bible And I Lied”…one of his most poignant songs he has in his arsenal called “False Accuser’s Lament”.

Shooter played one off his Don’t Wait Up For George album called Living In Minor Key”. Once again he told the story of how the songs off that album came to be. I included that story on a few articles about him in the past but in case you are a new reader I will include that story. Shooter said that one day a man contacted him claiming to be recording George Jones latest album and would he write some songs, so he wrote two songs. A few months later George Jones died and he found out the man was lying to him so Shooter recorded that album instead.

Jason Boland’s next song was “Drinki’n Songs” off of the 1999 album Pearl Snaps, and later on in the night he did play “Pearl Snaps” as well after Shooter played his great song “Rowdy Women”. You could tell they were having fun up there in that atmosphere, it was the first time for me to witness Jason Boland play live as he doesn’t get down to my area very often.

Shooter played “Solid Country Gold” and then Boland played” Lucky I Guess” once again off Dark And Dirty Mile album. Then Shooter played us a NEW song for Colonel Jon Hensley called “Leave Those Memories Alone”, that he intends to put on the new album. Speaking of new albums he also announced that there will be a NEW 2016 Mixtape released in about a week, so you can log on to BCR’s website and buy that. He announced that later on in the show as he played “Nashville From Afar”.

Boland played “When I’m Stoned” off of his 2009 self titled album and also played “It’s Alright To Be An Asshole” off the 2015 TOP 50 album of mine Squelch, along with “pearl Snap Shirts” and also “Let’s All Get Fat And Merry”. Like I said a lot of these songs were swapped out with Shooter as he played “Belle Of The Ball” and “Gunslinger”. The crowd responded REALLY WELL to Gunslinger.

He played “Gone To Carolina” and a song called “White Trash Song” that he wrote with songwriting Legend Steve Young. I have many stories about Steve Young, and honestly I knew he passed away that night I was with Shooter in JD Outlaw’s Wanted Saloon but I didn’t want to tell anyone and ruin the good mood of the show.

Jason Boland played “Comal County Blue” and finally played “Hank Williams” wouldn’t make it here in Nashville Tennessee. This was a show that WAS wroth EVERY PENNY. Because then Shooter played “Fourth Of July” and then played his father’s song “Whistlers And Jugglers” before they both closed the show with “Whiskey Bent And Hell Bound”.