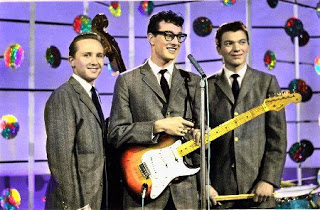 I have said it before and I’ll say it again..Country Music has three building blocks to it’s foundation.
Songwriters, producers and steel guitarists. Now true the steel guitar wasn’t truly introduced fully into
Country Music until the 1940’s from Ernest Tubb and Hank and others.
So really the first two are the more prominent two..some of Country Music’s Godfathers were
producers like Art Satherley.
Mr. Art was solely responsible for Vernon Dalhart recording some of the very first recorded Country
Music in history. In the dawn of our era he produced some of those recordings.

We had Ken Nelson in the Bakersfield Sound era and he revolutionized Country Music by
producing some of Buck Owens finest work and the Outlaw Era has people like Jimmy Bowen
who produced Hank Williams Jr. and Richie Allbright who produced Waylon albums.

In modern times now we have Shooter producing great music and people like Andy Gibson
who formerly played steel for Hank Williams 3 now produces GREAT underground music
for people the likes of Sarah Gayle Meech and others.

On Thursday December 4rth the world of music lost Bob Montgomery who began as a
planned singing duo with Buddy Holly before he formed the Crickets.
In the late 1960s, he moved to Nashville, where he started House of Gold Music. It became a major
publishing house, scoring hits for country stars including Alabama, Dolly Parton, Kenny Rogers,
Dottie West and the Judds.

He wrote “Misty Blue,” which became a country hit for Eddy Arnold in the mid-1960s. About a decade
later, the song was a commercial smash for the R&B and soul singer Dorothy Moore.
He sold House of Gold Music in 1983 to Warner Bros. He also worked over the years as
a producer and record-label executive.

Montgomery co-wrote some of Holly’s songs, such as “Heartbeat”, “Wishing”, and “Love’s Made a Fool of You” as well as the pop standard “Misty Blue”. He also wrote “Back in Baby’s Arms” for Patsy Cline which was his most
successful song commercially.

His son Kevin recorded a version of this song, which appeared on his album True. Montgomery produced Bobby Goldsboro’s 1968 #1 hit “Honey.”

Bobby Montgomery truly was one of the pioneers of the legendary producers of our time.