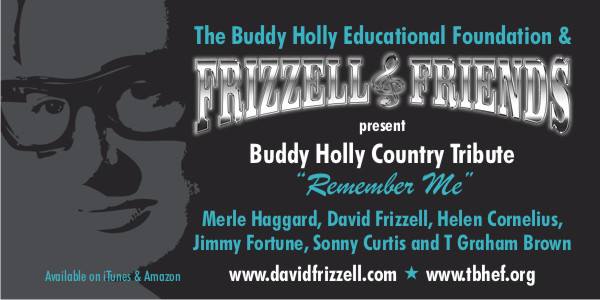 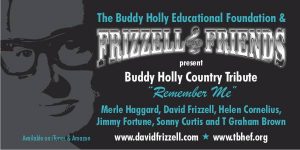 The Buddy Holly Educational Foundation has teamed up with Country Legends including
Merle Haggard and David Frizzell and more to bring you an album called “Remember Me,
the Buddy Holly Country Tribute”.

We really need this album, we need this man immortalized within our music history books.
This man and those like him are integral for the understanding of Country, and Rock music.
Much like Hank Williams this man also died way too young and way too soon.
Ironically he only recorded three albums much like Keith Whitley although Buddy Holly
was not known to be self destructive.

He also was one of the first of his kind to write, produce and perform all his own songs.

Merle Haggard, David Frizzell, Helen Cornelius, Jimmy Fortune, Sonny Curtis and T Graham Brown together make up one unbelievable tribute and most of all an enjoyable account of Buddy’s short but dynamic career in music.

If you would like to order a copy of this album and DVD set you can do so by clicking HERE.

The mission of The Buddy Holly Educational Foundation is to honor Buddy’s legacy as well as to make Buddy and Maria Elena Holly’s dream of extending musical education, including songwriting, production, arranging, orchestration, and performance, to new generations regardless of income or ethnicity or learning levels. We will empower a new generation to follow in Buddy’s footsteps.

Many of today’s Country Music Legends were influenced greatly by Buddy Holly and his band the Crickets
also spawned one of the Outlaw Era’s most beloved icons Waylon Jennings who played bass for him.
And his band also spawned Tommy Allsup.
As many of you Buddy Holly only lived to be 22 as he died in a plane crash in 1959.

In fact Bob Montgomery who just died this week was one of Holly’s pallbearers.
Buddy Holly’s entire career only lasted a year and a half yet he was and still is one of the most
influential artists of the 1950’s.

Many are familiar with the ever popular story of when Waylon refused a seat on Buddy Holly’s plane
and traveled by bus and Buddy said “I hope your bus freezes” to which Waylon replied “Well I hope your
plane crashes”..a statement that haunted Waylon Jennings for a lifetime.

There’s so many stories and so much history tied in with Buddy Holly it’s a CRIME NOT TO order
this album for your collection.