The Basement Nashville Welcomes The Tillers And Woody Pines. 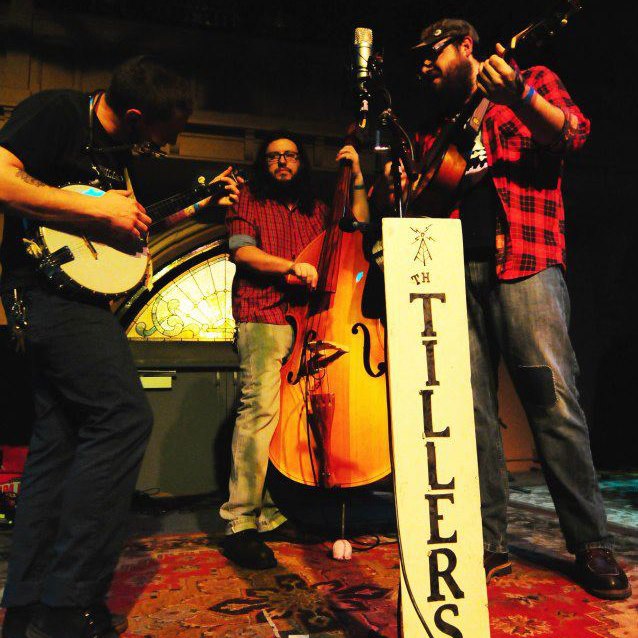 On November 19th The Basement Nashville welcomes a band
I wanted to feature during Muddy Roots Music Festival but couldn’t make it.
Muddy Roots is an organization I have supported on this website for years now and they have done
some really awesome things for me on a personal level. When I was in some really bad health issues
last year Mr. Jason sent me some love in the mail to help me feel better.
One of the albums was The Tillers “Hand On The Plow”.

They are one of the bands under the coverage of Muddy Roots Records label along with
Joseph Huber (formerly of .357 String Band), Country Legend Wanda Jackson and many more.
I see Muddy Roots expanding their label AND their festival programs for 2015 and I FULLY
intend to tell you ALL ABOUT them..after I research them.
Right now it looks like they just got off a tour with Pokey LaFarge another set I missed during
the mud fest.

They are a three piece string band that started in 2007 and they are based in Cincinnati Ohio.
They describe themselves as recovering punk rockers with roots in the city’s west side hardcore
scene. It also says they have a very percussive and hard strum and stomp.

Honestly I enjoyed their harmonies on the album and I think it was a damn fine recording
(So was Hanging Road from Huber) but they have several albums out now and THIS ONE
was VERY well produced and recorded.
They are damn fine stroytellers…the music is supposed to paint a picture on your brain
like a canvas and they do just that.
I also think their live album Live:From The Southgate House is their best work so far too.

This from their website:
The Tillers have since won over Cincinnati’s bar and festival scene, and launching tours with
tireless momentum. They were awarded CityBeat Magazine’s Cincinnati Entertainment Award for best
Folk and Americana act in 2009, 2010, 2013 and 2014. Their relentless gigging has taken them
throughout the East coast, the Midwest and West, the Appalachian south and to the UK and Ireland
opening for the St.Louis crooner, Pokey LaFarge. In the summer of 2009, veteran NBC news anchor
Tom Brokaw featured the Tillers on a documentary about US Route 50. Brokaw showcased the group’s
song “There is Road (Route 50)” as a testimony to the highway’s role as a connective tissue of the nation.

So trust me when I say that this is a show NOT TO MISS in this area people.
I cannot make this one but that shouldn’t stop you from going!
Somebody needs to go for me and give them some goodie bags for me..I need to hire help.

You can find all the information about it HERE

Now we are going to talk about Woody Pines another band I have
never got to feature on here.
They are based in the Nashville area and they are Roots Music, Ragtime, Blues and some other
stuff all mixed together.
Brad Tucker plays a vintage electric guitar and has a very unique style all his own, they are
quite a unique band. I have seen them once before but I was not operating the website at the time.

They announced a brand new album at the Thursday night Muddy Roots Pre Party that marked
the end of the current lineup of Jayke Orvis And The Broken Band.
And their entire catalog was released under the Muddy Roots label that night.
Their latest release was Feb of this year and was called “Rabbit’s Motel”.

Like I said I’ll miss this show BUT I promise I’ll feature BOTH of these bands shows
sometime in the future….PROMISE!