The Kentucky Opry Presents Nothing But Hits. 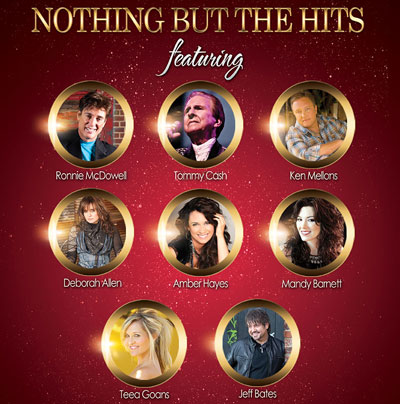 The Kentucky Opry knocks another GREAT Country Music show out of the park in December on the 15th, as Clay and Barbie Campbell and the Kentucky Opry welcomes “Nothing But The Hits”. This is one of those combination concert deals that brings a STABLE full of good talent your way at once.

Tickets are on sale now at 35$ for VIP Gold 30$ Silver 25$ and General are 20$. Pretty good value for that price to get this many acts. And I’ll tell you what, this show will certainly bring Traditonal Country Music back to the masses in many ways. The Opry’s website says that there will be a fifteen piece band playing along with all the artists involved.

Ronnie McDowell I have been to see many times and every time he puts on a stellar show. He has sold millions of records and paintings and has had over 20 charted hits. He has been entertaining people for many many years!
Tommy Cash is the brother of the late Johnny Cash and has put together a tribute show for Johnny on this tour.

Another good point I would like to make about this show is on steel guitar will be none other than Legend Doyle Grisham himself and will also feature Tim Atwood on steel.

Teea Goans is a young lady I have featured many times on this website from many shows she done. She has contributed to the Midnite Jamboree and WSM 650 many times. I been enjoying her music for many years, and along with her will be Mandy Barnett. THAT woman has a voice of pure Country gold and played Patsy Cline on the popular show Always…Patsy Cline. She is one of the hardest working acts in Nashville today, always on the road.