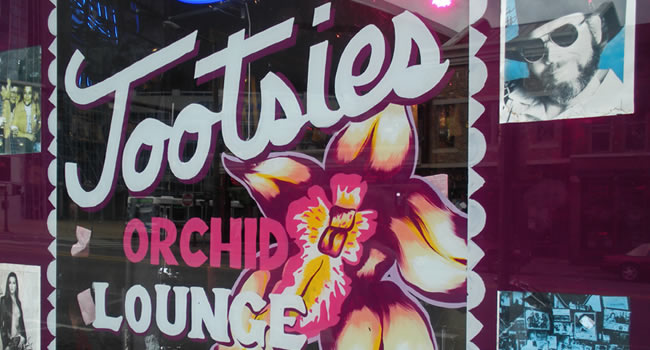 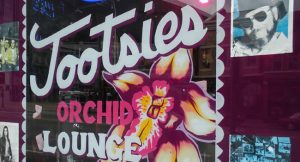 November 12th ALL DAY LONG down on Broadway Tootsie’s Orchid Lounge will be having their 54rth Birthday Party.
Tootsie’s bar has been long associated with Country Music as long as the Opry has been at
the Ryman. Now honestly a lot of people think it started at the Ryman when IN FACT it did not.

Back in 1925 when George D Hay began the Opry with the help of “Banker Man” Edwin Craig who funded
WSM they held the Opry on the fifth floor of the WSM building. Then it went to the Hillsboro theater
then on to the Nashville War Memorial center and THEN the Ryman Auditorium.

Back then in the 40’s and 50’s and so forth the Ryman and Tootsie’s were like bread and butter!
MANY songs were written in the hallowed honky tonk…it is adorned even still today with
signatures and pictures of Country Music’s greatest women and forefathers.

Time unfortunately has “changed” Tootsie’s and it isn’t the staunch Honky Tonk it once was
because of tourists and pop country taking over and messing it up (so-to-speak).
Honestly I’m NOT really crazy about some of the acts on this show but I WILL support
the ones I DO like, and you may not agree. So in all fairness I’ll mention the pop country
acts on this show too.
I actually CAN give some of them credit for being GREAT songwriters and guitarists.
I really try my best to not be negative on this website so here goes y’all.

RANDY HOUSER, TRACY LAWRENCE, and MONTGOMERY GENTRY’s TROY GENTRY have been added to the
lineup that includes TERRI CLARK, CHUCK WICKS, TRICK PONY and DARRYL WORLEY.
The Birthday Bash will include a Broadway street party hosted by America’s Morning Show host Blair Garner and entertainment on the outdoor Broadway stage throughout the day.

I’ll be honest Terri Clark has done some really good Country Music and is doing
acoustic shows that can knock your socks off!
Her last couple albums had little to no commercial success but they were GOOD!
I go out of my way to look for obscure and little known music from known people.
Her Roots albums are JUST THAT!

I like Tracey Lawrence’s early music. His first few album’s were not bad
at all! Honestly “Paint Me A Birmingham” wasn’t half bad in my opinion.
I honestly would pay some decent money to go see him play.

Darryl Worley is another one I really enjoyed his early music.
His first few albums were all pretty damn good and he’s one of my
“Guilty Pleasures” so to speak.

NOW THERE WILL BE SOME unannounced SPECIAL guests this day that are
Country Music Legends! I cannot publicly say WHO but trust me if the rumors
I heard are true, I’ll TRY MY BEST to go!