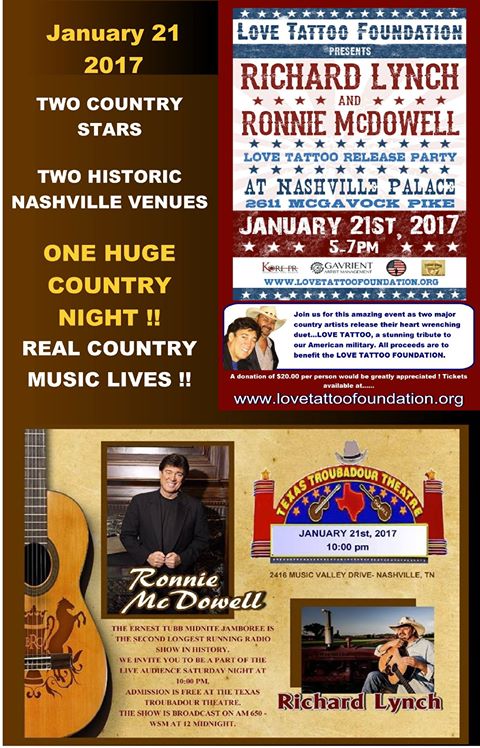 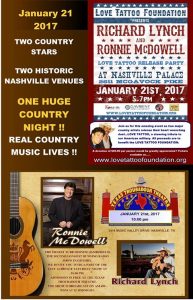 Just recently I was contacted by Twang Thang Country Productions to feature a REALLY great show at the Nashville Palace and will also be performed at the Midnite Jamboree. Just recently I received a media package from the management of Mr Richard Lynch and I’m very grateful to be included in the promotions of this event.

I’m going to do my best at getting down there for this great event as the Palace isn’t very far from me up here on the Tennessee/Kentucky line. This month I have several GREAT shows I shall be attending in town and I’ll be telling you about every one of them, you can rest assured.

Independent Country Music Hall of Famer and country chart-topper, Richard Lynch is no stranger to helping American military veterans. His passion and dedication were tantamount to his founding of the Love Tattoo Foundation, a non-profit organization that honors and assists the American Veterans. First conceived in a poem, written by Chuck Brisben. “Love Tattoo” was recorded by Richard Lynch and released in 2015. Fast-forward to late 2016, and enter Vietnam Veteran and #1 Billboard country chart artist, Ronnie McDowell…

Twang Thang Country and MTS Management Group are very excited to announce a One-Night-Only “Real Country Music” event on January 21, 2017. Richard Lynch and Ronnie McDowell will officially release the heart-wrenching military tribute duet, “Love Tattoo” at two Nashville performances. At 5pm, Richard and Ronnie will host the release party and show at Nashville Palace. Tickets are available at HERE At 10pm, the pair will perform at the historic Ernest Tubb’s Midnight Jamboree, located at Texas Troubadour Theatre. The Midnight Jamboree is broadcast live on WSM AM 650.

“Love Tattoo” was written by Chuck Brisben, Richard Lynch and Terry Dennis. It was produced by Mark Moseley at Sound Control Studios in Nashville, TN.

All proceeds from the Nashville Palace ticket sales and the sale of the single will benefit American Veterans through the Love Tattoo Foundation.

The Love Tattoo Foundation is a non-profit organization that honors and assists the American Veterans who carry mental or physical scars, from serving our country. Its mission is to raise money and awareness to help give these Veterans the opportunities they sacrificed, so we could have ours. For more information, please visit Love Tattoo Foundation