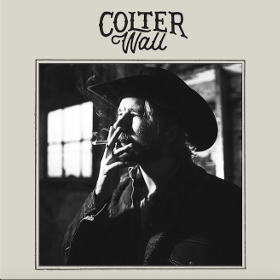 Half of these websites out there that are raving over this young man’s latest release don’t know this is his latest release, and that’s honestly a shame. Imaginary Appalachia was in fact a damn fine album, it made my TOP 50 OF 2015 because of Mr. Colter’s unique vocal presentations. He pushes the lyrics out from the bowels of his very soul and what emanates forth is nothing short of music that far exceeds his physical age.

But much like Hank Williams was in the 1950’s, Mr Colter isn’t the youthful sprite he should be at this juncture…no Sir. By the end of this article you shall concur with me that I hit the damn nail right on the head with this one, this album here FAR exceeded anything I could have prognosticated when I spoke with him on the phone after work one night. We spoke because I phoned him to inform him I made him my 2016 Artist Of The Year.

Even back then he was working his way into the halls of bigger venues and selling them out, playing with the likes of Cody Jinks and Lucinda Williams. But nothing…NOTHING…prepared me for this endeavor I witnessed when my needle dropped on that wax for the first time. I don’t know how he did it or what factors made it happen, but he found his focal point here vocally and lyrically.

This album is SO throwback in demeanor that my father who has Alzheimer listens to this album and is convinced it’s from HIS era the likes of Marty Robbins Gunfighter songs, and you know what? I actually agree. The stories and scenarios are vivid and full of despair at times the likes of Red Headed Stranger or something from a Louis L Amour book.

“Thirteen Silver Dollars” the albums opener brings you back to his home of Speedy Creek in Canada, and directly paints a story within the mind of anybody willing to listen, while at the same time contains poignant strumming and powerful notes from his acoustic.

The cover of “Fraulein” is a duet with Tyler Childers made popular by many like Bobby Helms. The style and spin these two young men placed upon this classic song I’m positive would make Cash, or any of the Legends we adore smile. Perhaps one of the best songs on the album was the song “Me And Big Dave”, another great story that equally painted a picture on my mind as I closed my eyes and allowed the song into my head. It’s full of D chord strumming like the classic western songs of old, but honestly it’s not all about Mr. Colter.

This band of folks he has assembled and dubbed his “Speedy Creek Band” are just absolutely top top top notch in every aspect of the word, and with Dave Cobb at the producer’s pilot seat and our old friend W.B. Walker lending a hand flipping the record over it finalizes a powerful team of warriors marching forth in the name of REAL Country Music.

However the cream of this whole album lies within “Kate McCannon”, a powerful murder ballad story about a man in prison taunted by a raven in the beginning. The descriptions and references within this 5 minute song are just absolutely bone chilling. In fact I would have to say it’s one of my top songs I have ever heard in my life, the way he finds her with another man and the song builds up power as he pulls the trigger. It just comes out of your speakers kicks you right in the face.

“Snake Mountain Blues” was by far his finest song vocally with a very hazy and unfiltered rasp. When you watch Mr. Colter perform you can SEE where it comes from, he is a natural performer and cares very deeply about how the listeners feel when he’s done.

No, half of those websites have no idea what kind of a storm is brewing here, nor do they have any idea just WHAT they are “reviewing” this isn’t something I’m reviewing. I’m just telling you facts people, just absolute unarguable facts. There is a massive, cold, battle winding within the music community…and with Mr. Colter Wall on our side we have won.