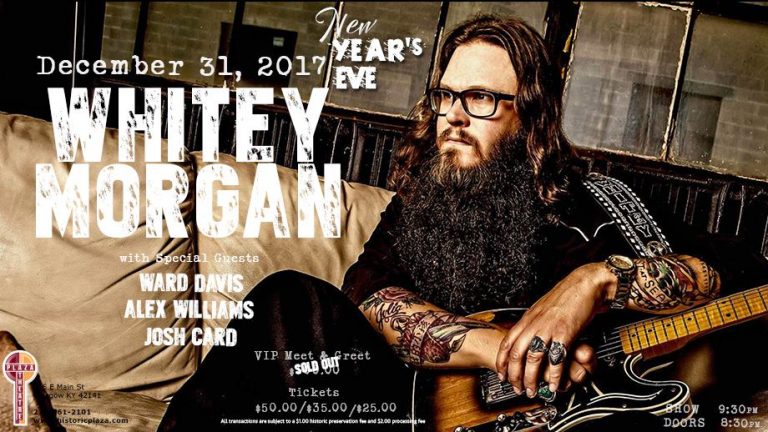 I don’t need to tell you any more about Mr. Whitey Morgan And The 78’s unless you have been living under a rock for the past few years. His last album Sonic Ranch made my TOP 50 OF 2016, and I have featured his shows many time on this website. I have watched him perform at so many venues in so many states it’s not funny, however this New Years Eve I will see him in  Kentucky..I have not been to him in Kentucky before at least that I can recall?

I have a nice lead on a bed and breakfast across the street, so I don’t have to drive..not that I’m worried because well I don’t post personal stuff on here..but I’m having a bout with my liver. I cannot drink anymore, it’s taken so much damage in my past. I’ll be honest I don’t really miss the blackout drunks, however I DO STILL enjoy listening to Ol Mr. Whitey sing about whiskey and being inebriated. So if you see me BUY ME A WATER, because i’m supposed to stop the cokes too. Dammit now the coke colas are MY vice..

Anyways getting back on track here, lets talk about the fact he has Mr. Ward Davis as an opener whom played the Ryman with Mr. Cody Jinks Read about Ward Davis at the Ryman HERE and I have went to see him play all over this year. I follow that scene and that crowd quite prevalent, and have many good friends within it. We’re waiting for a new album from this songwriting genius, with much anticipation, and all we know right now is the song “Geronimo”. I went to see him at the Warehouse In Bowling Green and you can go there and watch the video of the song.

Now THEN let’s chat for a moment about a DEFINITE addition to my TOP 50 of 2017 (SEE if you read me on a regular basis I HAVE REVEALED 15 TOP 50 already). Mr. Alex Williams is one of the few that I saw on Big Machine Records that doesn’t scare me. In fact I was beyond impressed with what he has brought to the table here, and I cannot wait to feature his set on here, and bring you videos and commentary on what I see!

Mr.Josh Card And The Restless Souls is another opener I am truly looking forward to seeing that night.You know folks one thing this website is known for is discovering opening acts many other websites overlook. I don’t spend time with comment forums and discussions with my readers INSTEAD I’m busy studying people and books. I’m NOT making fun of anybody I’m just stating how I RUN my business, and it garners me more results.

Josh Card was raised in a small “one stoplight” town in Northeast Florida, where everybody knows your name, the County Fair is the best time of year, and simpler ways of living still exist. His small town beginnings and humble Southern upbringing landed him at age 13 holding a guitar that his Grandmother bought him, sitting on the porch of the house his Grandfather built, at the end of a dirt road, trying to play along with her Conway Twitty albums. The rebellion stage soon followed, and driven by teen angst and a thirst for loud music, Josh spent the next 15 years playing in several successful punk and hardcore acts, touring internationally and releasing several albums.

Now, residing in Louisville, KY, Josh has reunited with his roots to play the music that he has carried with him throughout the years. The songs he’s been writing and storing are finally being heard. Josh went into the studio in November of 2016 and recorded his first Country album. Pulling elements and influence from his Honky-Tonk and Outlaw heroes, Josh has made an album that provides to his listeners what modern day Country music lacks: authenticity, honesty, substance, and soul. On February 17th, 2017, Josh will release his debut full length album, “Josh Card and The Restless Souls” digitally, on CD, and vinyl record. Building steam with his passionate and captivating live performances, there is no doubt this album will pave the way for his future in music. There’s a new name in Country music, and like Josh’s idols that came before him, he’s doing things his way.

NOW WHERE IS THIS YOU ASK well This New Years Eve night I’ll be at the Plaza Theater in the heart of Glasgow Kentucky and you better get tickets NOW because the 35, and 25 are the ONLY ONES LEFT for this event.  This is a VERY NICE venue and I fully intend to bring you much information on this show. From their website:

Outlaw’s always been the rough-around-the-edges, tough guy uncle at the country music family picnic. Denim and leather, not Stetson and Nudie. Hair by Pennzoil, not Pomade. But, in the right hands—Haggard, Paycheck, Junior, Willie and Waylon and now Whitey Morgan—Outlaw is more than beards and bandanas, ink and attitude, it’s damn folk music.  It’s about doing the best you can, about getting by and about cold beer and colder women—everything that keeps the honky tonks full on a Saturday night. It’s about standing up when it’d just be easier to fall down.