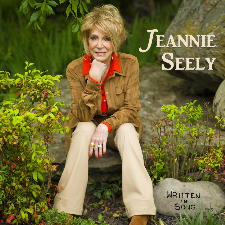 You might remember my article last year about Country Music Legend Jeannie Seely releasing a brand new album, to refresh your memory you can read that HERE. The new album will be called “Written In Song”, and will be featured in an album release party on January 10th at 3Rd And Lindsley. All proceeds will go to the Opry Trust Fund that helps out musicians in need.

Miss Jeannie is one of our ‘Grand Ladies” of the Opry we still have with us, and in 1967 when she joined she was the first Pennsylvania native to become a member. In 1969 she moved to Decca to partner up with Jack Greene which revitalized both of their careers, by making their road shows extremely commercially successful. I have a HOUSE FULL of Jack Greene memorabilia and along with Jeannie Seely their pictures and posters adorn my main living room (The VERY ROOM I WRITE THESE ARTICLES). It was actually after the initial provocation of her future husband Hank Cochran that she made the 1965 move to Nashville only to be turned down by many of the labels here in town. Monument picked her up in 1966 and after some help from various stars she went on to become one of Country Music’s most beloved songwriters and Opry members, and still is to this day.

However in 1969 when she moved to Decca records THAT WAS my favorite period of her career I admire the most as a fan. The 1970’s were the height of the Outlaw movement which rivaled the Nashville Sound, but Seely and Greene also did something popular then..the Duet Country I call it. You know Dolly and Porter (and Norma Jean) then we had Conway and Loretta..and more.

Now this album will contain fourteen of the stories of her own life contained in songs that were previously recorded by some her peers and her heroes. “Leaving And Saying Goodbye” was originally recorded by Faron Young in 1972 but more noticeably performed by the late Dawn Sears from The Time Jumpers. The mighty Merle Haggard who sadly left us last year recorded “Life Of A Rodeo Cowboy” off the 1978 album “I’m Always On A Mountain When I Fall”.

“Never Gonna See You” was a song that never got cut by anybody and it is a tale from a real life experience of hers, and she explains it is the first thing that goes through one’s mind when a loved one informs you of their intended departure. And Miss Jeannie explains that she doesn’t recollect precisely what point of time it is from that she penned it along with another song “The Pain Once Your Gone” which runs along the same lines.

“He’s All I Need” is a Dottie West song that was on the 1983 album New Horizons and in fact was Miss Dottie’s last charted album before her death in 1991. “Sometimes I Do” was recorded by Ernest Tubb on the 1977 album “Living Legend” on First Generation Records. This song has always been one of my favorite Ernest Tubb cuts, and always will be in fact the 1970’s are just a decade I so dearly love PERIOD with every aspect of music from Country to Rock.

Miss Jeannie reports that she waited until everyone forgotten whom she wrote some of the songs about, and that’s how she narrowed down by personally choosing which ones to record to only fourteen offerings on this highly anticipated album by many Country fans.

“Enough To Lie” was a GREAT choice that was originally recorded by Ray Price in 1966 off the iconic album “Touch My Heart” that included the song “There Goes My Everything” wrote by Dallas Frazier and of course originally recorded by Miss Jeannie’s counterpart Jack Greene. This link HERE will take you directly to her website where you can pre-order your copy NOW!